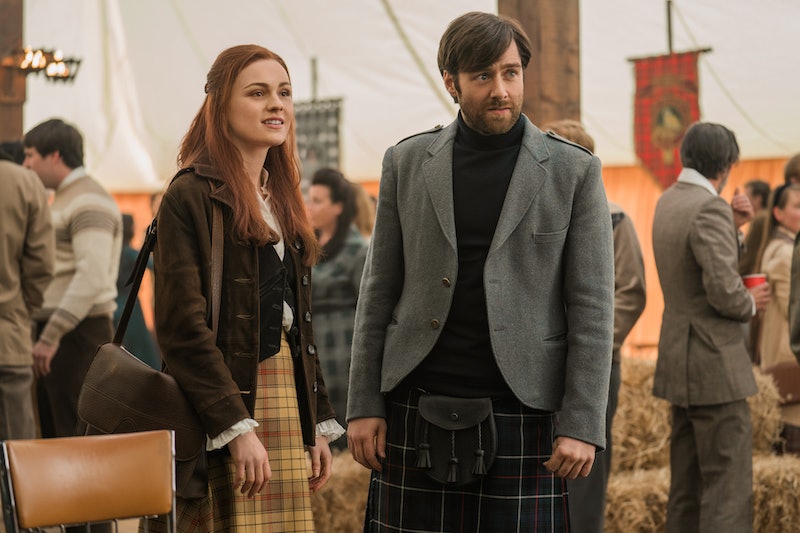 As much as I love watching Jamie and Claire explore America together on Outlander, I'll admit that I was eager to check back in with Brianna (Sophie Skelton) and Roger (Richard Rankin) during Sunday night's episode, "The False Bride." However, that excitement quickly turned to a mix of rage and disappointment after they had a pretty intense fight, ending what was initially a fun, romantic road trip with a sexist argument. And despite how much I've been rooting for them since they first got together, it's because of this that refuse to keep shipping Brianna and Roger's relationship on Outlander.

The start of their trip to a Scottish festival in North Carolina couldn't have gone better. Though they shared a somewhat awkward hug upon first seeing one another, they quickly fell back into a great rhythm, quipping about french fries and getting their portrait painted. Then later that night, they headed back to Brianna's cabin where things started to really heat up. But before they could get very far, Roger hit pause on the passion to present Brianna with a beautiful bracelet and decided that now would be a good time to propose. Never mind the fact that these two haven't seen each other in a while and Roger wasn't even sure where their relationship stood prior to his visit. But yeah, marriage seems like the most logical next step. Sure, makes total sense.

Brianna was understandably thrown off by his offer and felt clearly overwhelmed when he began talking about the house they would live in and how they'd have four or five kids. It was a lot to take in and he came on way too strong, but Brianna attempted to handle it the best way she could. She tried to let him down as gently as possible, explaining how she simply isn't ready to make that big of a commitment at this point in her life. But instead of accepting her decision and agreeing to move at a pace that felt comfortable for her, Roger shamed her for wanting to have sex with him without the promise of marriage in their future. And while I get that he was hurt and embarrassed — no one likes getting rejected when they're at their most vulnerable — that's no excuse for the misogynistic behavior that ensued. Roger showed an ugly side of himself I never knew existed.

Brianna obviously cares deeply about Roger. In fact, she may even be falling in love with him, if not already in love. However, that doesn't mean she has to automatically sign up for an engagement and rush into marriage before their relationship has had time to properly develop. Heck, why don't they try living on the same continent first before making any drastic decisions? Maybe if both of them were feeling that strongly about it, then fine. That'd be great. But it isn't something Brianna wants right now, and rather than taking the high road and respecting her wishes, Roger felt obligated to veer onto the highway of toxic masculinity.

"You don't want to marry me, but you'll f*ck me?!" he yelled at her during their fight. "If all I wanted was to have my way with you, I would've had you on your back a dozen times last summer." (If you ask me, Roger got off easy with just getting a slap to the face for that comment.)

Thankfully, Brianna was more than capable of holding her own and proceeded to call out his sexist hypocrisy — like why it's apparently OK for him to have slept with other women and yet he expects her to remain a "proper Catholic girl" (aka a virgin) until fully committing to him. What kind of B.S. double standard is that? He argued that he didn't love those other women, but it's different with her, so if she won't agree to marry him then that means that she clearly doesn't care about him. It's the textbook definition of gaslighting and I never thought it would be something I'd accuse Roger of doing. He's always seemed so sweet, and he played a significant part in reuniting Claire and Jamie — for which I will be forever grateful. However, his behavior in this matter is inexcusable.

The following day, Brianna tried to make amends, even though her actions had been totally justified. But when Roger knew that her decision about his proposal had not changed, he gave her an ultimatum: "Brianna, I love you all or not at all." Way to be emotionally manipulative, dude. I get that these two share a special bond. After all, no one else in the world understands the complexities of Brianna's, let's say, unusual family history, but he crossed a line.

Granted, this is all taking place in 1971, which is at the very start of the women's liberation movement. The idea of women being sexually promiscuous (and having a right to be so) was still a radical concept, which is something Skelton spoke with Bustle about at New York Comic Con. "It's quite a '60s discussion actually," Skelton said in regard to Roger and Brianna's big fight. "I think it's really, kind of influential scene in that way but also really just kind of sum up the times in terms of you know, sexual revolution and not giving up religion, but having that kind of... gray area.”

Then there's also the fact that Roger was raised by a reverend in Scotland while Brianna grew up in the city of Boston and was raised by Claire — a woman who went to medical school, even though it was considered to be a "male profession" at the time. So yes, their perspectives on gender roles and sex, in general, were bound to be very different. But Roger didn't even try to see Brianna's point of view, and therein lies the problem. Why is Jamie, who grew up in the 18th century, more willing to grow and learn from the woman he loves — even if her thoughts and beliefs don't match the time period they're in — and yet Roger can't do the same, even though he lives in a much more progressive age? Brianna deserves so much better than that. And while book readers know that their story is far from over, they now have one less fan shipping them from the sidelines.

More like this
UK Viewers Will Have To Wait To Watch The Handmaid’s Tale S5
By Maxine Harrison
Kaley Cuoco Was Set Up With Her New Boyfriend Tom Pelphrey By Her Manager
By Hugh McIntyre and Jake Viswanath
Nicola Coughlan Shared A Lady Whistledown Excerpt From ‘Bridgerton’ Season 3
By Grace Wehniainen, Alyssa Lapid and Sam Ramsden
'Elite' Season 6 Is Arriving Sooner Than You Think
By Gretchen Smail and Grace Wehniainen
Get Even More From Bustle — Sign Up For The Newsletter