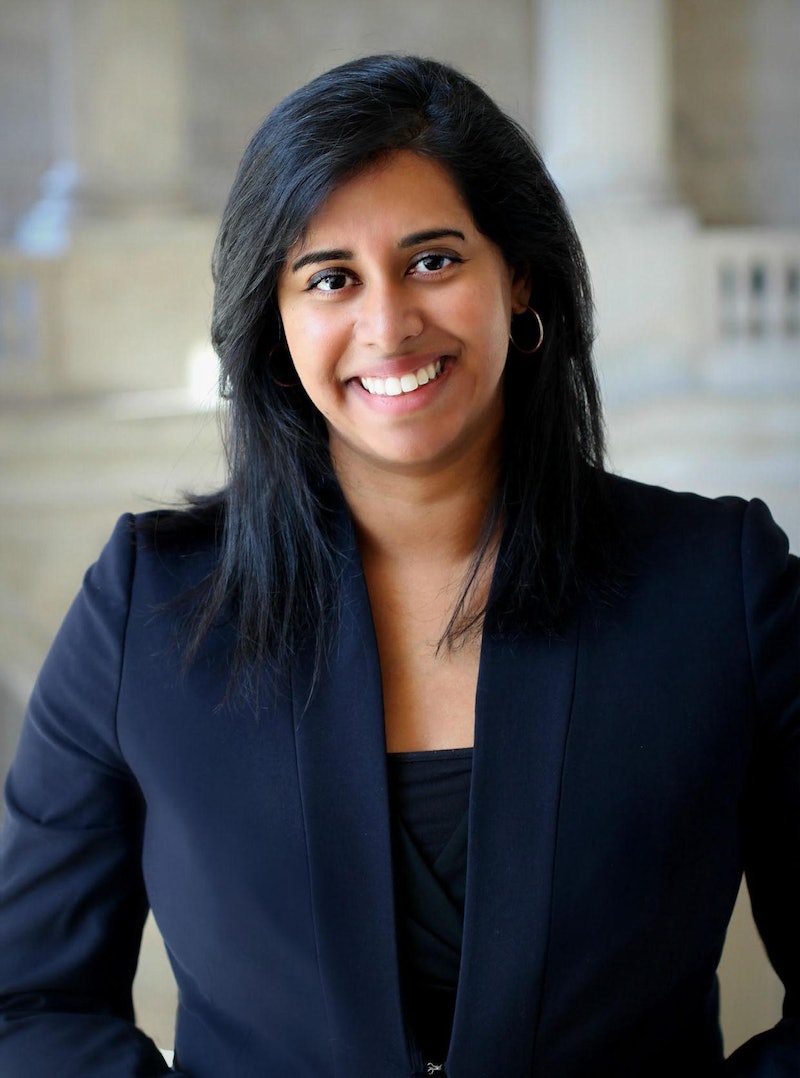 The Office of Senator Kamala Harris
By Clarissa-Jan Lim
Dec. 18, 2018

Sen. Kamala Harris is making a key staffing change ahead of a holiday season in which she’ll be mulling a decision on a presidential run. On Monday, Harris announced Rohini Kosoglu as her new chief of staff. Kosoglu, who is Sri Lankan-American, enters the position as the only Asian-American woman currently serving as a U.S. senator's chief of staff — and she tells Bustle that she's optimistic about Congress becoming more diverse in 2019.

"As a woman of color in this position, I think it’s important to create a pipeline of talent," Kosoglu says, adding that diversity is an issue that Harris also "feels is important."

Kosoglu's promotion from deputy chief of staff reflects a diversity among Harris' staffers that isn't matched by all her Democratic colleagues. And the numbers bear that out. According to a 2017 report released by Senate Democratic Leader Chuck Schumer, most senators from the party employ women staffers, but an overwhelming number of staffers are white. At the time that report was released, Harris' office employed the second-highest number of people of color, behind only Hawaii Sen. Brian Schatz's office. The newly minted chief of staff tells Bustle that it's important for lawmakers and senior congressional staff to reflect the demographics of the country.

"I think it’s important that when we advance diversity [in Congress], we also advance the ability to address many issues in front of us," Kosoglu says. "Our staff reflects California — the makeup of California, as well as the country."

Kosoglu, who attended the University of Michigan and The George Washington University, got her first taste of national politics as a mailroom manager for Sen. Debbie Stabenow (D-Mich.) after she graduated. She worked her way up in Stabenow's office to senior policy adviser, then moved on to Sen. Michael Bennett's (D-Colo.) office as his senior health care adviser while Congress crafted and passed Obamacare. After seven years with Bennett's office, Kosoglu got an offer from Harris, then a senator-elect, to work as deputy chief of staff.

"I jumped at that chance to help her and the people of California get this office up and running," Kosoglu says.

The staffing announcement comes a few weeks after a former senior aide to Harris, Larry Wallace, resigned his post after The Sacramento Bee asked about a $400,000 settlement stemming from allegations of "gender harassment" by his former assistant.

The Bee reported that the complaint arrived at the California Justice Department in October 2016, when Harris was still state attorney general. Harris told The Bee that the settlement was "deeply unsettling and sad," and she's maintained that she and her office weren't previously aware of the settlement. Kosoglu echoes what Harris told The Bee about the "frustrating" situation.

"She’s already been working to make sure that we reexamine our employee paperwork that people come in and sign," Kosoglu says of Harris. "Certainly within our Senate office we have high standards around any training — employee training that they go through — and also that there is a strong chain of command in terms of any complaints that anyone has in our office."

As a new crop of women and people of color prepare to be sworn in to Congress in January, the priorities of lawmakers on Capitol Hill are expected to shift. Legislation like the Green New Deal and the Domestic Workers Bill of Rights (which Harris co-sponsors) are gaining support, reflecting the values of minority communities that have had little to no representation in Congress in the past.

Like the range of experiences among members of the incoming 116th Congress, Kosoglu says having that diversity in background is valued in Harris' office. A mom of two children, aged 3 and 5, Kosoglu says that being a mother and being a chief of staff to a senator "are not separate from each other." If her son has a day off from school, he'll visit the office and spend the workday there.

Juggling both roles has been made easier in an office where "we're transparent about our lives," Kosoglu says.

"Certainly Sen. Harris encourages our office to be open and honest and transparent with each other with the lives that we have. And she understands the sacrifices we all make to do public service," Kosoglu adds. "The part that I enjoy is that when we’re able to take certain experiences that we’ve all had ... and be able to focus that on policy agenda that helps the middle class."