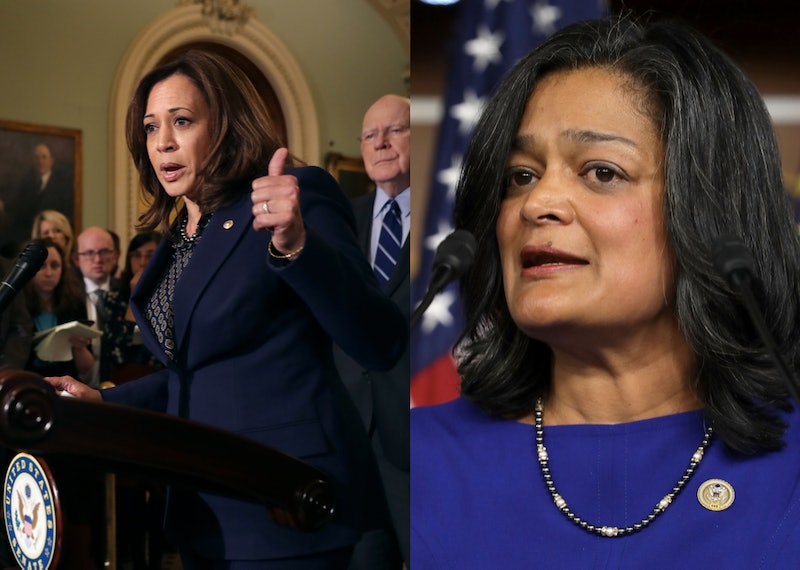 There are nearly 2 million domestic or in-home workers in America. The majority of them are women or people of color, and yet most lack the basic workplace protections that other employees enjoy. But that may be about to change: Sen. Kamala Harris and Rep. Pramila Jayapal have announced that they'll introduce the Domestic Workers Bill of Rights in the next session of Congress, and if enacted, it will protect some of the most vulnerable and exploited women in America.

“The work domestic workers do is the work that our economy is built on," Harris tells Bustle. "We need to speak the truth that they are too often undervalued and underappreciated, and don’t have the same workplace protections as other workers."

As Harris and Jayapal point out in a CNN op-ed, America has plenty of worker protection laws. But many of them — including the National Labor Relations Act, the Civil Rights Act of 1964, and the Occupational Health and Safety Act — don't extend their protections to domestic workers. Some of the laws explicitly exempt in-home workers from their protections, while others apply only to employers with 15 or more employees — effectively excluding most domestic workers.

As a result, nearly one in four in-home workers live in poverty, according to a 2013 study by the Economic Policy Institute. The overwhelming majority of domestic workers don't have employer-provided health insurance or pensions, and their hourly wages are almost 25 percent lower than the wages of workers in similar occupations, according to that same study. Under federal law, in-home workers don't have the right to overtime pay or work breaks, and are not protected from sexual harassment or racial discrimination at work. In their op-ed, Harris and Jayapal cite the case of one domestic worker in Florida who was sexually harassed daily by her clients for over three months but didn't speak up for fear of losing her job.

Although Harris and Jayapal haven't yet released the text of their legislation, their op-ed — which was co-written with National Domestic Workers Alliance (NDWA) Executive Director Ai-jen Poo — broadly describes what the bill would look like. The legislation would guarantee rest and meal breaks, paid sick days and health care for domestic workers, establish grants for domestic worker training programs, and close the loopholes in existing laws that exempt domestic workers.

"We must extend protections to those who have been silenced and overlooked for decades," Harris, Jayapal, and Poo write in their op-ed. "Because it's not just what we do in the public eye that matters, but what we do behind closed doors -- and change begins at home."

Eight states — almost all of them heavily Democratic — have enacted protections for domestic workers similar to the ones Harris and Jayapal are proposing. In New York, for instance, in-home workers have the right to overtime pay, a six-day work week and protections from workplace harassment and racism. In July, the city of Seattle passed a local ordinance that provides similar benefits to domestic workers, becoming the first city to do so.

The bill, once it's introduced, will have better odds of passing in the House of Representatives than the GOP-controlled Senate, as Republicans have historically been more hostile to workers' rights laws than Democrats. That said, Harris tells Bustle that now is perfect the time to pass the legislation, given that the record-high number of women and people of color in the new Congress.

"This fall, Americans elected a historically diverse Congress to represent all Americans," Harris says. "With that front-of-mind, there’s no better time to pass this legislation."