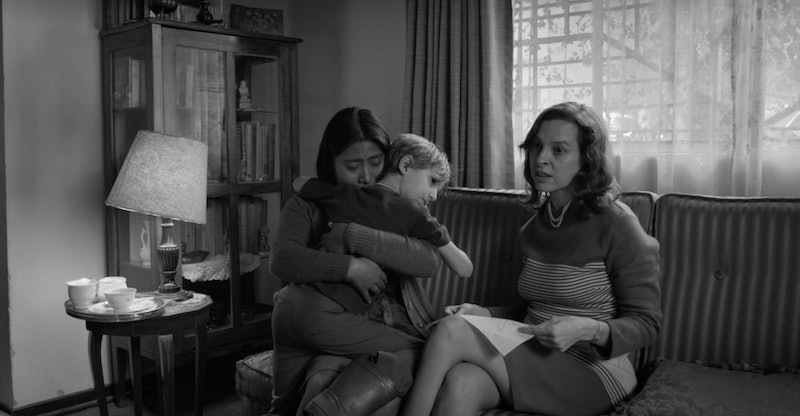 Alfonso Cuarón's autobiographical drama Roma, about growing up in 1970s Mexico, isn't about him. It's about women. Out on Netflix and in theaters, Roma stars Marina de Tavira as Sofía, a middle class mother of four, based on the director's own mother, Cristina, and Yalitza Aparicio as Cleo, the family's live-in maid, who is based on Cuarón's former nanny, Libo. The film is also dedicated to the latter.

The relationship between Sofía and Cleo is complicated and hard to define. By the end of the film, it's tempting to say they've become something like friends, but that's not it at all.

"We don't even have a name for it," de Tavira, now nominated for an Oscar for Best Supporting Actress, tells over the phone me two days after Roma took home the Golden Globes for Best Foreign Language Film and Best Director. "It's an employer/employee relationship. But it's also family. But you also depend on her. But you also pay her. But she knows every single detail of your life, because she's a witness of your private life, and she's in your private life. But at the same time she's not. We don't have a word for that, but I can tell you that these two women live their whole lives together."

She points to Libo and Cristina as real-world evidence. "Sadly, Alfonso's mother passed away six months ago or so, but she and Libo, who is the real Cleo, they lived together all their lives, and Libo still lives with Alfonso's family," she says.

When de Tavira auditioned for the movie, she didn't know she was auditioning for a Cuarón film. "The casting director, he said you have been chosen among the group of actresses that are going to meet the director tomorrow. It's Alfonso Cuarón. I was like—" she gasps "'—Oh my gosh. How did this suddenly happen?'"

Unlike many of the other actors in Roma, including breakout star Aparicio, de Tavira is far from a first-time actor. She's appeared in numerous Mexican TV shows and movies, and with her career starting in theater, she's been in over 20 plays. Still, starring in a film by a director as respected as Cuarón — and one that is getting the type of international attention that Roma is — is very exciting.

"It was truly a dream," she says of attending the Golden Globes. "I never imagined that one day I would be sitting in that room, and never with a movie that won for Best Foreign Film, so it really got me to tears. It was a beautiful moment."

"I think that's what people treasure about this film, it opens our most beautiful human side."

But, long before she and the film got there, de Tavira found out that she was going to be playing a woman inspired by her director's own mother. "It was my first meeting with Alfonso. He invited us over, Yalitza and me together, and he said that this was a film about life itself and that it was an honor to two women that he knew very profoundly," de Tavira explains. "He never said, 'It's my mother', but I knew by the way he was talking about her and all the details he knew, it was very personal." She decided not to focus too much on that fact and told herself, "I need to embrace this character, because if I think about that it's Alfonso's mother, that's going to not let me work. That's going to make me too scared."

The 44-year-old actor, who, like Cuarón, is from Mexico City (she says being on set was "like traveling in time"), also saw the role as a tribute to her own mother. "[My mother] went through something really similar during the early '80s. And I think our society was mostly the same in the '80s and the '70s, the way a woman of that social class would have to face divorce and the way this affected her children. It was as if I was living again my parents divorce in the 1980s."

De Tavira is "grateful" that Cuarón made a film focused on a complex relationship between two women, but in particular, she's glad to see a woman from an indigenous community represented through the character of Cleo and through Aparicio. "These women and their children are the ones that have been suffering most in our country for ages, for decades. I mean, generations and generations, they are the most vulnerable," she explains. "So to make her the center of a film that's been having international recognition, I think it's really important for women and for women that belong to a social group and racial group that's been really not looked at, that's been invisible for so many years."

There is a line towards the end of the film that will stand out to any woman who hears it. Sofía, at the turning point in her divorce, tells Cleo, who has just faced two, separate life threatening situations: "No matter what they tell you, women, we are always alone."

"Oh my god, I can totally relate to that line," de Tavira says. But as she continues on, it becomes clear that she believes women are alone, together. And that she has a personal connections to the film on many levels.

"I live with my son and with the woman that helps me raise my — my everyday life. The three of us are a little family for our everyday life, so I really can feel that," she says. "The way you get back home and there's only this woman that's been your support, and it's the one that's been helping you be a mother. There are so many families that are being led by women and by the women that work for them."

De Tavira continues, "And the feeling that you have to fight for your children by yourself. I mean, that's something that really moves me. And I just hope that that line, there becomes a time where we don't have to say it."

That time may be far off, but for now, de Tavira believes that Roma as a whole is connecting with audiences because, like Cuarón told her, it's about life itself; events and emotions people can relate to regardless of their background. "At crucial moments, like the moment at the beach when Cleo saves the children, that's when we really are all the same and human beings in the precariousness of life," de Tavira says. "I think that's what people treasure about this film, it opens our most beautiful human side."