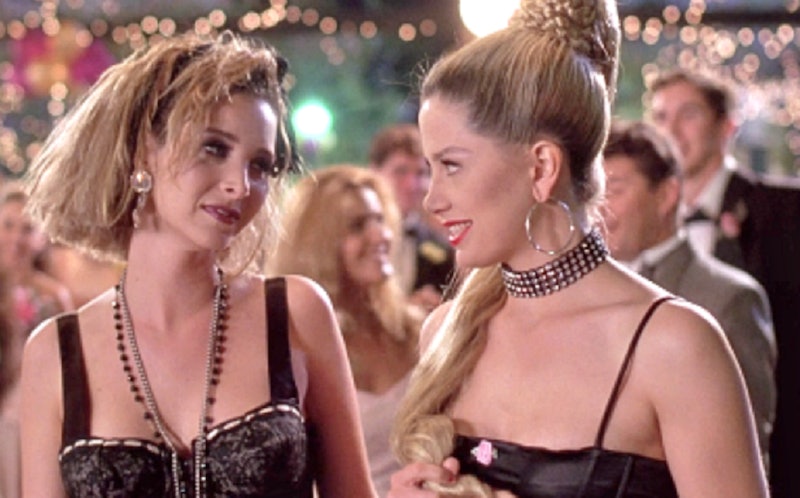 Just in case you were ever in any doubt about it, let me reassure you about something: The portrayal of female friendship in Romy And Michele's High School Reunion is a pretty powerful, and important one. When I was a kid I immediately related to Romy and Michele's relationship and the idea that they were basically each other's everything. And as a young woman, this sort of friendship was tantamount to my survival throughout high school, and I reveled in seeing that portrayed with sublime hilarity on screen. But, on the 20th anniversary of Romy And Michele's High School Reunion, I've realized that the movie’s portrayal of female friendship goes even deeper than that.

Superficially, it’s easy to mistake the movie as being nothing more than a fluffy story about two women desperate to impress their old classmates at their ten year high school reunion. But, if you’ve watched the movie as many times as I have, then you’ll likely also know what I know: The movie is actually about self acceptance, and the way that friendships help to inform our identities, and bring out the best in us. Essentially, Romy And Michele’s High School Reunion is a love story about a lifelong platonic friendship, and in fact, female friendships everywhere. And 20 years later, I'm still absolutely living for it.

As someone currently around the same age as Romy and Michele were in the movie, I've come to realize that Romy And Michele's High School Reunion provides a fantasy portrait of a mature, female friendship. As many of us discover in our twenties, the vastness of the world, careers and love lives, the adventure of starting a family, sometimes disrupts the relationships we have with our best friends. Sometimes we all get pulled in different directions from the friends we love, and though we long to keep that closeness of our youth, it isn't always easy to accomplish.

Which is why it's still so enjoyable to see Romy and Michele's tight-knit relationship in the movie. Its clear that in the ten years since they graduated high school that they've both prioritized their friendship and having a good time together, over pursuing careers or finding long term boyfriends. It's an idealized friendship, and not one that's practical for most women as they get older, but it doesn't stop the portrayal of their friendship from being completely heartwarming nonetheless.

When we first meet the two besties, for instance, they're both sat upright in twin beds watching Pretty Woman. They basically share a bedroom together like Bert and Ernie, making every day of their lives feel like a never ending slumber party. They share a close proximity that, though a little unhealthy for grown women to enjoy, is still completely envy inducing. They value their friendship above all else, and clearly it's the center of their entire world.

In high school, of course, it's easy to maintain this kind of a friendship with someone, because such a relationship is essential to your very being at that age. What Romy And Michele's High School Reunion posits though, is the idea that it's important to still maintain such a friendship at any age, and regardless of the obstacles. It argues that true love isn't just a romantic sentiment, but a platonic one, too. And when you find true love within a friendship, that careers and love lives shouldn't be prioritized above it, but in tandem with it. You see this happen in movies all the time where romantic love forces a woman to re-prioritize her career or her friendships, so why not explore the same with a friendship?

Early on in the movie, Romy frets about being unable to find her and Michele boyfriends for the reunion, thinking that they need them in order to impress their old classmates. But as we see throughout the movie, the relationship that they have with each other is just as impressive, significant, and gigantic, as any romantic one. The moment when Michele adorably asks Romy to dance at the Senior Prom, for example, frames their friendship as being just as monumental as a romantic one. The two even have their own song ("Time After Time" by Cyndi Lauper), the way that couples often do.

This is a really important, and rarely seen, message for young women to see in a movie: Friendship is just as valid and fulfilling as a romance can be. The love, fun, and happiness you experience in a truly great friendship isn't any less valid than the one you'd share with a romantic partner, and that's a truth that deserves to be acknowledged, and celebrated. Which is exactly what Romy And Michele's High School Reunion does.

Because, by the end of the movie, after both Romy and Michele realize that having a good time together is worth way more than impressing their old classmates, they genuinely do end up impressing everyone. They change out of their hideously generic business woman power suits, and into those slamming mini-dresses (which, for the record, I still totally covet), and they proudly embrace who they are, and celebrate their friendship. And everyone (well, except for the "A group") loves them for it.

From there, one of them finds a boyfriend (Sandy) who can dance in perfect synchronicity to their "song," with them, and who respects and compliments their friendship, rather than disturbs it. And by the end of the movie we see the two having built their very own business together, a fashion boutique crafted by the bright, positive power of their friendship, giving them the chance to enjoy a career that also supports their relationship.

Of course, this perfect friendship isn't always possible to achieve in the real world. But it's still a comfort to witness on screen, regardless. Romy And Michele's High School Reunion is a fairy tale that frames a lifelong friendship as the ultimate happily ever after. It's a movie that highlights a platonic relationship as being the magic that propels personal growth, and that defeats the sort of villainous foes that ever threaten to make you feel any less than you deserve to.

So please, go hang with your bestie, wear complimentary ensembles, and dance proudly to whatever your song happens to be. As Romy and Michele proved, that relationship is true love, and it's deserves to be celebrated at every opportunity possible.