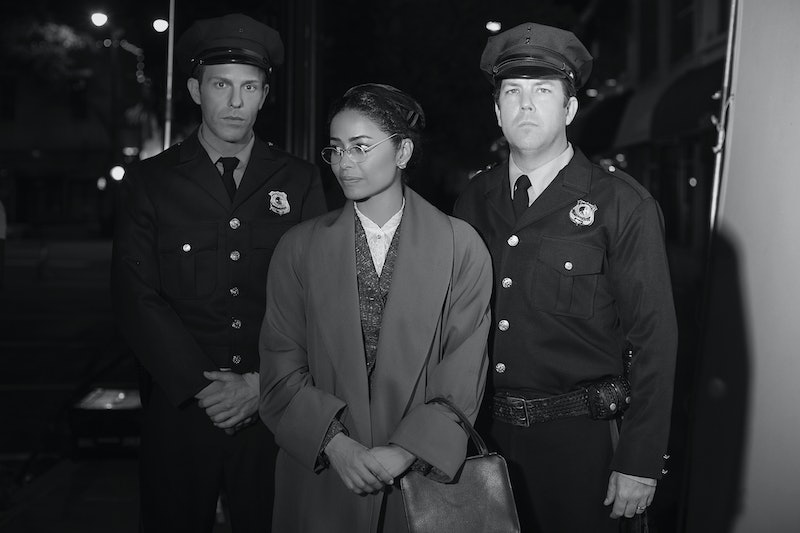 She's been called a legend, a hero, and even a game-changer, but Rosa Parks' story goes way beyond what you've been taught in school. Before the Montgomery Bus Boycott of 1955, Parks was a department store seamstress by day, and a secretary for the Montgomery chapter of the National Association for the Advancement of Colored People by night. Though revolutionary in her own right, becoming the face of a historic movement was not exactly on her agenda. "Rosa, as a person, was a reserved, kind of calm, steadfast personality," actor Meta Golding says of the Alabama native, as we chat about her role in the new Rosa Parks' biopic, Behind the Movement. But according to the actor, Parks had a lot more fight in her than people would've initially thought.

Along with actors Isaiah Washington, Roger Guenveur Smith, and Loretta Devine, Golding stars in TV One's rendition of Parks' story, set to air on Sunday, Feb. 11. You may be thinking, "But wait... didn't Angela Bassett already deliver a Rosa Parks' biopic?" And you'd be totally right. According to Golding, however, this television special will hone in on an intense three days that helped spearhead the historic Montgomery Bus Boycott of 1955 — from the time Parks decided not to give up her seat.

Before starting the project, The Hunger Games star admits that her knowledge of Parks paralleled what most learned about the icon in history class. "I knew who Rosa Parks was and what she did," Golding says. "But, I really saw her as more of a symbol and a face. In my mind, she was a little old lady who happened to do this."

Golding goes on to explain that her way of thinking — more accurately, the way of thinking for most people who learned about the famed hero in grade school — was not only a fable, but her image was apparently part of a strategy from the NAACP when piecing together the movement.

"At the time they needed to have a face and an image that was nonthreatening, because they didn’t want to make it seem like she was this revolutionary," Golding says. "It would scare too many people, and not just in terms of white people, but also in terms of black people. They were asking the black community to put their livelihood at risk."

"Sometimes people think being of service means that you’re docile... When actually, it’s your actions that are really fundamentally revolutionary."

Not that Parks deciding not to give up her seat on that fateful day in the deep, segregated south had any forethought. After all, Parks was sitting in "colored section" when asked to move. But with the "not-guilty" verdict of the historic Emmett Till murder trial weighing on her heart, Parks couldn't bare to comply with the same loathsome system that didn't have the decency to give the thugs who executed that 14-year-old boy the punishment they deserved. She knew something had to be done to put an end to the unjust treatment of her people, and so, she refused to get up.

At the time, E.D. Nixon (portrayed by Washington in the film) and the Montgomery NAACP chapter believed that it would be a lot easier to get people behind the movement if Parks was branded as a docile, quiet, defenseless old lady. Their strategy led to a successful boycott, and ultimately the desegregation of public transit in the deep south, but this particular move was only the beginning.

Behind the Movement will give viewers a peek into what it was like for Parks, and the fearless titans beside her, to organize and then mobilize more than 50,000 participants in the boycott — and, of course, all of this was pre-social media.

That's right, three days after Parks was arrested for not giving up her seat on the bus, the local NAACP chapter members constructed a movement that would completely influence the fate of the south's segregation laws. But what's not often shared is that those behind the movement all had full-time jobs, and a slew of other responsibilities in the midst of that.

As mentioned prior, Parks was a seamstress for a whites-only department store, and while serving as the president for the local NAACP chapter, Nixon worked as porter for the railway station. It was like living a double-life for many activists involved, or what Golding and her co-star Washington often referred to as "going undercover" while on set. Those involved had to know that the sacrifices made — including putting their livelihoods at stake — were for the greater good, and doing so, required a certain type of fearlessness and determination.

"Rosa, as a person, was a reserved, kind of calm, steadfast personality," Golding reiterates — yet that tranquil nature shouldn't be confused with weakness. "The truth is that by the time Rosa Parks refused to give up her seat, this was a seasoned activist." Dating as far back as the 1940s, Parks was heavily involved in the civil rights movement. Whether fighting for the fair and just treatment of black WWII veterans, or encouraging black citizens to get registered to vote in the deep, segregated south, Parks was no stranger to standing up for what she believed while in the face of danger.

After the success of the bus boycott, Parks continued to be of service to her people through the remainder of her days. Like many of her counterparts in the movement, Parks didn't bask in a lap of luxury after garnering notoriety. Being a hero didn't exactly translate into riches; in fact, it was the exact opposite for Parks. "Like many people did, she died a woman who was penniless, she was harassed for the rest of her life."

Parks dedicated her life to seeking fair and just treatment for all disenfranchised people, and did so selflessly. "I think sometimes people think being of service means that you’re docile and quiet," Golding says, "When actually, it’s your actions that are really, fundamentally, revolutionary."

Parks is the epitome of a selfless hero, and because of films like Behind the Movement, viewers will get to see what's needed in order to affect real change. You don't need have a large social media presence, be able to command an audience like Martin Luther King, Jr., or have a colossal amount of money at your disposal. But rather, when groups of ordinary people come together with a common goal, planning, organizing, and implementing an action plan can work wonders.