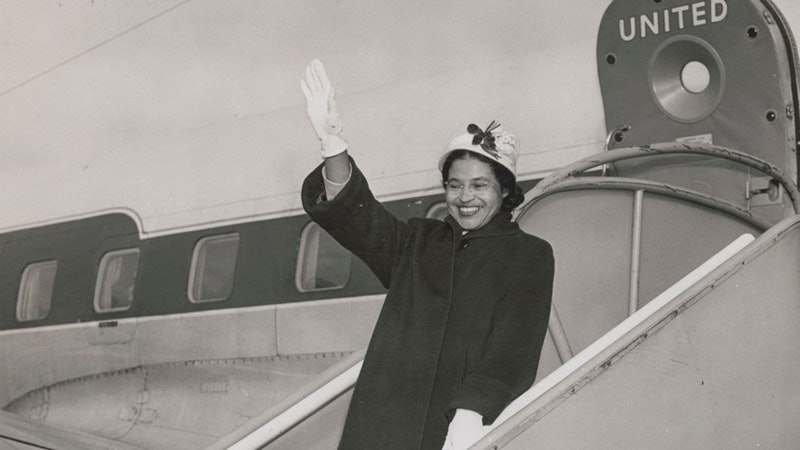 If she were still alive, Rosa Parks would be 102 years old today. In one act of courage on Dec. 1, 1955, Parks became part of a movement to end the bus segregation of the South known as the Montgomery Bus Boycott, and secured her place in American history as the mother of the civil rights movement. Parks, an assistant tailor in Montgomery, Alabama, took the 2857 bus on the Cleveland Avenue line home on Dec. 1, but never made it there. After being told to get up and give her seat to a white man, Parks decided enough was enough. She wasn’t just a woman who was exhausted, but a woman who was tired of being treated like a second-class citizen.

When the bus driver, James Blake, threatened to call the police, Parks politely told him, "You may do that." And so he did. Parks was arrested and charged with violating the segregation law of the Montgomery City code.

While the picture we sometimes have of Rosa Parks is that of a woman who sort of found herself in the middle of the civil rights movement, there is much more to her than that. Parks was a fighter, a revolutionary, and a woman who stood up for what was right in a time when to do so was to risk your life. Her courage and acts of bravery are something that doesn’t come around very often.

Here are 13 things about Rosa Parks you should know.

1. Parks Didn’t Refuse To Give Up Her Seat Because Her Feet Were Tired

The myth is that Rosa Parks didn’t get up that day because her feet were tired, but that actually wasn’t the case at all. She wasn’t tired physically, but as she wrote in her autobiography, My Story, but "tired of giving in." Though she was an activist, the act wasn’t premeditated, either. It was only when she was told to move that she decided then, in that moment, that she would not.

2. Parks Wasn't Sitting In A 'Whites-Only' Section Of The Bus

Contrary to popular belief, Parks wasn't sitting in a section for white passengers only. She was sitting in the middle section of the bus which, if other seats were available for white riders, African-Americans could sit in. But because the whites-only section was full, the bus driver, James Blake, told Parks and the three other black riders to move. Of the four of them, Parks was the only one to stand (or should we say sit) her ground.

3. Parks Wasn’t The First Black Woman To Refuse To Give Up Her Seat

Nine months before Parks’ was arrested, on March 2, 1955, 15-year-old Claudette Colvin refused to give up her seat to a white passenger. She was arrested and kept in jail for several hours until her minister paid her bail and she was released. She became one of the four plaintiffs in Browder v. Gayle, the case that determined it was unconstitutional of Montgomery to have a segregated bus system. Parks was very much involved in trying to raise money for Colvin’s defense.

4. This Wasn’t The First Time Parks Had Trouble With That Particular Bus Driver

Over a decade before she was arrested for not giving up her seat, Parks had a run-in with the same bus driver, James Blake. During that encounter in 1943, Parks refused to get off the bus and reenter through the back door, since she had already paid her fare and entered through the front.

After that day, Parks tried her best to avoid getting on Blake's bus, but that day in December 1955, she simply wasn’t paying attention. If she had been, Parks wrote in her autobiography, "I wouldn’t have gotten on that bus."

When the bus boycott ended on Dec. 21, 1956 and bus integration was mandatory, it was James Blake's bus that Parks got on and posed for photographs in. It was apparently completely coincidental, but obviously really, really fitting.

5. Parks Was Already A Civil Rights Activist Before Her Arrest

Both Parks and her husband, Raymond, were civil rights activists long before she become well-known for it. Parks had said that her husband was the "first real activist" she'd ever met and she fell for him because of of his refusal to be "intimidated by white people."

She had been a member of NAACP since 1943, and at the time of her arrest was a secretary at the local Montgomery chapter.

6. Parks Knew The NAACP Was Looking For A Plaintiff

Because she was a member of the NAACP, Parks was aware that the group was looking for a plaintiff to challenge the Jim Crow law in the courts. Parks did not intend on being that person, but because of her actions that day, she became that plaintiff.

In 1957, Parks and her husband moved to Hampton, Virginia, because she was constantly receiving death threats in her home of Montgomery. But she also moved because she didn’t agree with Dr. King’s version of how to move the civil rights movement forward.

She felt that civil disobedience can only get you so far, and eventually turned to Malcolm X, who preached that African-Americans should fight against whites "by any means necessary." She also attended Black Political Convention in Gary and the Black Power conference in Philadelphia, proving that she was a lot more radical than most of us realize.

8. Parks Was On The Board Of Advocates For Planned Parenthood

Parks wasn’t just an advocate for civil rights, but for women’s rights as well. Later in life, Parks was on the board of advocates for Planned Parenthood, despite that fact that Margaret Sanger, who founded the American Birth Control League (which would become Planned Parenthood), unfortunately believed that some races are inferior.

9. There's A Highway In Missouri Named After Parks That The KKK Adopted

In 1994, the Ku Klux Klan applied, through the Adopt-A-Highway program, to have a portion of I-55 in Missouri. In adopting the highway, it would mean that the Klan would have to maintain it and they'd get a sign saying that it was maintained by the hate group. Although initially local government tried to refuse their request, it was eventually found unconstitutional to do so.

In an act of beautiful defiance, the Missouri legislature decided to name that stretch of highway "Rosa Parks Highway."

10. Parks Is The First Black Woman To Earn A Statue In The Capitol’s Statutory Hall

In January 2013, Sen. Chuck Schumer announced that Parks would be the first black woman to have a statue in the Capitol’s Statuary Hall. The statue, of her waiting to be arrested, was unveiled in February of the same year.

11. Parks Is The First Woman To Lie In State

When Parks died in 2005, she became the first woman to "lie in state." Her coffin was on view in the Capitol Rotunda, a place often reserved for presidents and lawmakers who have impacted the United States.

In June of 1999, President Bill Clinton presented Parks the Congressional Gold Medal, the highest civilian honor one can receive. She was recognized as a "living icon of freedom in America."

During Clinton's ceremonial speech he said, "Rosa Parks reminded us all that . . . for millions of Americans, our history was full of weary years, our sweet land of liberty bearing only bitter fruit and silent tears. In so many ways, Rosa Parks brought America home to our founders' dream."

13. Parks Was A Hero To Nelson Mandela

Upon his release from prison, where he had been for 27 years, the activist and anti-apartheid revolutionary told Parks, "You sustained me while I was in prison all those years."