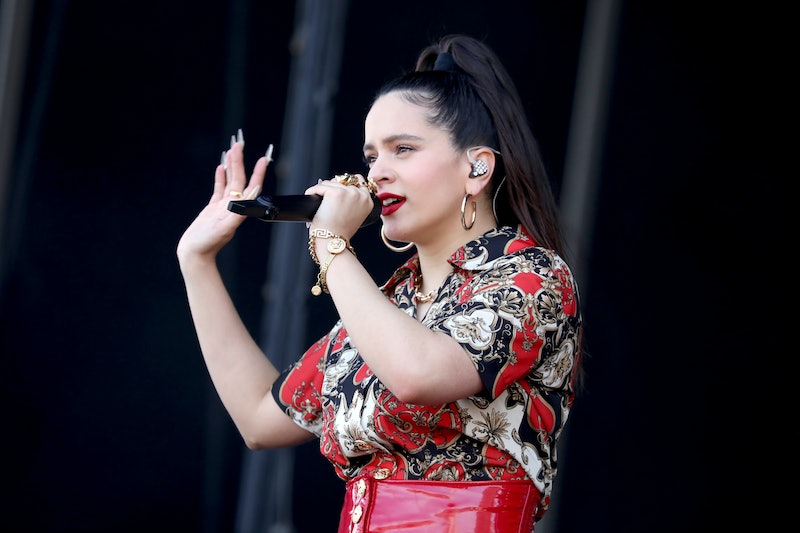 If you haven’t been following the meteoric rise of Rosalía, aka La Diosalía, over the last year, I’m so excited you get to make that leap now. The Spanish artist made her debut in 2017, and has since collaborated with the likes of El Guincho and J Balvin, not to mention played Coachella this summer, following the 2018 release of her critically acclaimed album El Mal Querer. Hence, why Vogue México put Rosalía on its latest cover, headlining a group of “20 artistas latinos.” But if you’ve been thumbing through Twitter the last few days, you might have seen criticism that, well, Rosalía is not a Latinx artist. The reality is that for many people, and especially those who aren't immersed in Latinx and Hispanic culture, the difference between Latinx and Hispanic just isn’t top of mind — but it needs to be.

In a May 2019 cover story for the Fader, Rosalía told writer Isabelia Herrera, “If Latin music is music made in Spanish, then my music is part of Latin music. But I do know that if I say I’m a Latina artist, that’s not correct, is it?” The singer, who makes music inspired by Andalusian flamenco culture, clarified that she’s “part of a generation that’s making music in Spanish” and suggested that others should decide if she should be included in a modern definition of what “Latin” music sounds like.

The absolute, most basic distinction between Latinx and Hispanic, in the way these terms are used today, has to do with geography: “Latinx” basically means originating in Latin America (and thus includes non-Spanish speaking cultures like Haiti or Brazil), where Hispanic basically means originating in Spain and Spanish culture. But there’s a lot of confusion around this distinction as well, mostly due to overlapping legacies of colonialism. It may be helpful to remember that the reason the majority of people in Latin America speak Spanish is because the Spanish colonized this region starting in the 1500s, wiping out or violently acculturating many Indigenous languages and cultures. If you choose to take a very literal interpretation of the word Hispanic, then anyone who speaks Spanish or can trace their ancestry back to Spain can identify as “Hispanic,” regardless of what region they call home.

But another reason this is complicated is because of the United States’ colonial role in Latin America. “Hispanic” is a term that fell into broader use because of the U.S. census, after Congress passed a law in 1976 mandating "the collection and analysis of data for … ‘Americans of Spanish origin or descent,’" as the Pew Center writes, where “Spanish” refers to the use of the Spanish language. But because the census relies on self-identification, says the Pew Center, anyone can identify with the word Hispanic who feels called to. Essentially, as a demographic identifier in the U.S., it means almost nothing. “In 1980, the government first used ‘Hispanic’ on census forms with further options for Mexicans, Mexican-Americans, Chicanos, Puerto Ricans, Cubans, and ‘other,’ still not fully identifying the various countries whose residents constituted the Latin American diaspora,” Araceli Cruz wrote for Teen Vogue in 2018.

Latinx, instead, holds space for people who want to identify themselves separately from the history of colonialism that, unfortunately, defines the region that Latinx people call home. (There’s another debate entirely about whether the term Latinx is useful outside of the United States, where it’s a catchall for all people of Latin American descent in diaspora, who don’t necessarily speak Spanish.) “Growing up, I despised being labeled Hispanic,” Cruz wrote. “It made me feel as if my Mexican and indigenous side was being wiped out.” As a person of Puerto Rican descent, I feel similarly.

While Rosalía makes incredible music that makes me feel connected with aspects of my culture, it’s hard to see her lauded as a Latinx artist, when so many Latinx artists don’t get the love they deserve. To be fair, in Spanish, “artista latino” could just as easily be translated as “Latin artist” — aka, an artist making music in Spanish, to borrow Rosalía’s definition above — as “Latinx artist.” Further, the fact that Rosalía is so often categorized with other Latinx artists is the fault of a music industry that insists on categorizing music in Spanish as separate and other, and not necessarily of the artist herself. I’d love to see Rosalía take artists like Karol G or Natti Natasha on tour with her, or otherwise uplift artists who are marginalized in the music industry, as a way of showing solidarity across all our cultures. But until then, it’s important to be careful with the language that we use to talk about “Latin” music — so that nobody’s experience gets erased.

More like this
Harry Styles Helped A Fan Come Out As Gay In Dramatic Fashion At His London Show
By Jake Viswanath
Tove Lo Wants A Safer World
By Sam Ramsden
J.Lo Uses They/Them Pronouns To Introduce Her Child Emme For A Special Duet
By Jake Viswanath
Why You're Seeing Green Bandanas At Abortion Rights Protests
By Lexi Inks
Get Even More From Bustle — Sign Up For The Newsletter