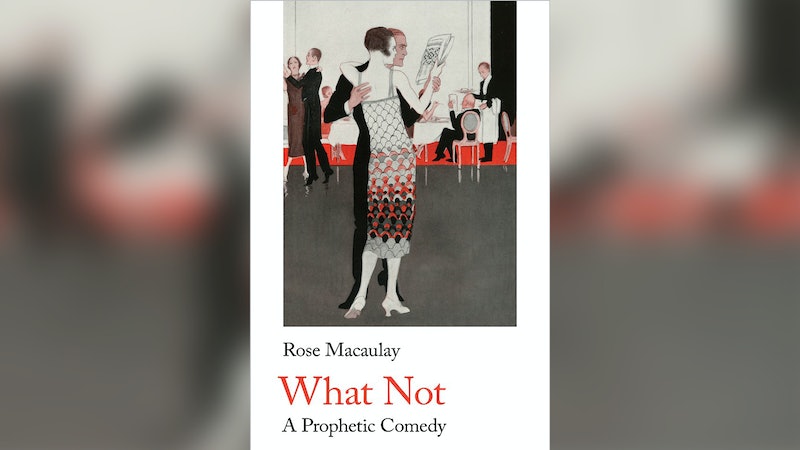 A media outlet is blamed for igniting nationalistic, populist, right wing ideology. A magazine publisher is rumored to have blackmailed a prominent political figure regarding his secret affair. A novelist is censored by her publisher to ward off a libel suit. A male writer copies a female colleague’s ideas; he enters the literary canon and she is all but forgotten. All of the above might sound like just another week in American headlines — but would you believe that I’m actually referring to a story that took place in England, 100 years ago? If there were any doubt, history moves in a circle.

The story is What Not: A Prophetic Comedy by Rose Macaulay, which is being rereleased by Handheld Press on March 25 in the UK. First published in 1918, the speculative, dystopian novel documents the love affair between Kitty Grammont and Nicholas Chester — one a civil servant, the other a high-profile politician — who are unable to marry due to their government’s "breeding restrictions." Under the guise of preventing future world wars, the English government has formed a Ministry of Brains, designed to ensure that individuals of "low intellect" are unable to procreate. (If they do, they’re essentially taxed into poverty.) Infants are regulated by the Intellect of the Great Unborn branch of the Ministry of Brains. Government Mind Training courses are encouraged for all citizens. The Directorate of Entertainment is responsible for distracting people into complacency. Hidden Hand is the daily, state-run newspaper. The Office of the Censor has an extensive list of Things We Do Not Mention (peace, war, freedom, eugenics, the poor…). Are you starting to get the picture, here?

“It was set, not in England, 1918, but in some kind of parallel world,” says Sarah Lonsdale, senior lecturer in journalism at City University London, who wrote the introduction to the new edition of What Not. "People still dressed, behaved, and worked in the ways one might expect of England, 1918, but there were these odd mentions of things like the ‘aero bus’, a flying commuter bus, and the ruling United Council, and the government department the Ministry of Brains."

She first read What Not while working on her PhD thesis, and describes being baffled and then delighted by the text. "The delightful thing about this nuanced dystopianism was that Macaulay simply presented us with these ideas, without explanation, just expecting the reader to go with her on this hall of mirrors journey into this slightly distorted version of England.”

Upon publication, What Not was quickly removed from circulation due to Macaulay’s potentially libelous writing. The novel was reissued the following year, with the content in question removed. Macaulay herself, the author of dozens of novels and nonfiction works, was never really accepted into the literary canon, though her ideas about state-run media and state-controlled reproduction would later be seen in novels like Brave New World and, to a lesser extent, Nineteen Eighty-Four.

'What Not: A Prophetic Comedy' by Rose Macaulay
Handheld Press

Long out of print, What Not is now being reissued for a second time. This month, UK-based publisher Handheld Press is republishing Macaulay’s novel — just in time for the 100-year anniversary of its original appearance — with the reportedly libelous passages included. In anticipation of the reissue, the novel has been touted as an early work of feminist dystopian fiction, and the novel that directly influenced Aldous Huxley to write his own.

As to why the novel remained relatively unknown for so long, Lonsdale says there are a number of reasons — including the demarcation made by both Modernist writers and academia, between Modernism and other contemporary writing. "This demarcation categorized contemporary literature into the canonical: Joyce, Eliot, Yeats, Woolf, and a few others, and consigned the rest of the whole rich outpouring of writing during the interwar years as ‘middlebrow, ‘popular’, or ‘genre fiction’, and not worthy of academic study,” Lonsdale says. “Macaulay, dismissed by Woolf as a ‘successful lady novelist’, was thus doomed to what is now known as the ‘slaughterhouse of literature’, where so many writers disappear forever."

What Not is also, she says, a difficult novel to grasp; it is not written for the casual reader looking for armchair entertainment. She says it is a text that demands engagement and critical thinking.

It’s a novel that will speak to modern readers, especially at a time when readers are increasingly finding themselves drawn to dystopian work, and feminist dystopian writing in particular. There is little in What Not that seems impossible any more — and in fact, to one degree or another, much of what Macaulay speculated on has or is happening around the world, today.

There is little in What Not that seems impossible any more.

“What Not’s modernity lies in its treatment of media manipulation,” Lonsdale says. “The embedded messages to women to go on mind training courses in the women’s magazines are particularly chilling and remind me of the current problems we have over fake news and advertising in social media posts. We don’t know what it true, what is genuine, and what is manipulation; and we see what happens when a society is exposed to widespread manipulation, as happened in the 2016 Brexit vote and Trump election.”

In other words, “fake news” is hardly new. “What is interesting is that although we look back to those days of print-only media and see it as a relatively innocent time, it was so much more pervasive then,” Lonsdale continues. “The newspapers during the War had literally been full of lies about the progress of it, about how cowardly the Germans were, and Macaulay, being part of the Government propaganda department, knew only too well how easy it was to manipulate millions of people.”

The state oversight of reproductive rights is another point on which contemporary readers will connect with Macaulay, and it’s this exact idea that Huxley is rumored to have swiped from Macaulay’s work — the writers shared a mutual friend in literary editor Naomi Royde Smith, and stayed at her home together. “The similarities between the state control of reproduction in What Not and Aldous Huxley’s Brave New World seem so strong that I cannot believe they are a coincidence,” Lonsdale says.

However, despite the fact that Lonsdale describes Macaulay as “outraged at the repression of women writers’ ambitions by the male literary establishment,” she also says that there is no indication that Macaulay felt Huxley stole elements of her work, particularly as an established writer who was 14-years Huxley’s senior. “By 1932, when Brave New World was published, Macaulay was in her literary heyday and possibly did not begrudge the younger writer’s copying of her ideas.”

"The similarities between the state control of reproduction in What Not and Aldous Huxley’s Brave New World seem so strong that I cannot believe they are a coincidence..."

Lonsdale also says that the link between Macaulay and Orwell is “more tenuous.”

“What we can say is that both Orwell and Macaulay shared surprisingly similar views on the manipulation of the civil service during wartime, and the ‘hive mind’ that develops when groups of people work in close company on a joint project,” Lonsdale explains. “Macaulay’s Kitty Grammont, however, is not afraid of authority in the way Winston Smith is, and although the state in What Not clearly has cruel methods in disposing of unwanted babies, there is not the same level of control through terror in Macaulay’s novel.”

The missing, now reinstated, passages of Macaulay’s novel add another twist in the author’s story. Specifically, Macaulay’s publishers feared that her descriptions of magazine editor Percy Jenkins would lead to a libel suit.

“We don’t know who the publishers had in mind, but my money would be on Horatio Bottomley, the editor of John Bull, a scurrilous, nationalistic publication blamed during World War I for stirring up much jingoistic fervor amongst its millions of readers,” Lonsdale says. “John Bull would fit the bill for the fictitious Patriot, which was also a popular weekly."

Lonsdale explains that in England, during World War I, John Bull and its editor Horatio Bottomley, were "widely disliked for debasing public discourse and appealing to a nationalistic, populist, right wing streak in the English during the War.”

“The reinstatement of the pages restores the novel to how its writer initially conceived it; it shows too, Macaulay’s sharper criticism of the world of popular newspapers, and overturns 100 years of censorship of the novel,” says Lonsdale. Both fitting and ironic, in a novel that features, as one of its central themes, state-controlled media and censorship.

Though Lonsdale says Macaulay likely wouldn’t want to be limited to only the label of “feminist writer,” she does note that Macaulay’s work and personal life leaned in the direction of equal rights for women. “She did not marry, instead took a married man as her lover, thus enjoying the comforts of a relationship without the huge restrictions getting married meant to a woman in the 1920s and 30s,” says Lonsdale. “What Not is feminist in that the three strongest and most sympathetic characters: Kitty Grammont, Ivy Delmer, and Pansy Ponsonby are all women; very often their down-to-earth common sense and vigorous intellects pierce the pompous ambitions of the male politicians and newspaper editors. They assert their right to be treated as equals not through campaigning but just through being stronger, harder-working, and clearer-sighted than the men.”

As a writer herself, Lonsdale says she both admires and relates to Macaulay. “I admire her spirit, her experimentation and her sheer prolific output,” she says. “She was a complex, and famously witty woman; shy yet also with a rapier-sharp tongue when she wanted — something I don’t possess. Macaulay was always also something of an outsider — never totally accepted by the highbrow Bloomsbury set, but clearly their intellectual equal, and that’s something I relate to, too.”