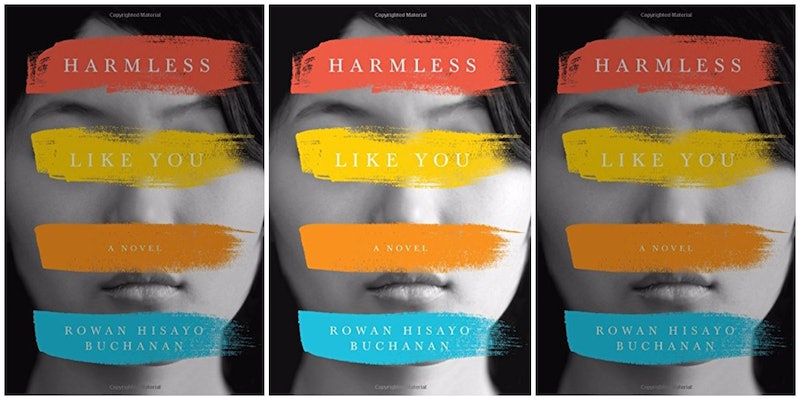 Putting one’s artistic work out into the world is a complex experience — filled with risk and reward, excitement and vulnerability, conflict and connection — no matter when a writer makes their first appearance on the literary stage. But to publish a debut novel in a climate fraught with politicization, ideological divisions, and challenges to both fact-telling and free speech is a wholly different kind of risk. Even if a writer never intends for their work to be explicitly political, is the mere act of storytelling a form of resistance?

This is one of the many questions you might find yourself asking as you read Rowan Hisayo Buchanan’s debut novel Harmless Like You, out February 28 from W. W. Norton & Company. The novel meets readers in the place where art and identity intersect, and tells the story of Yuki Oyama, a Japanese teenager and aspiring visual artist living in the United States. Woven into Yuki’s story is that of her future son, Jay, who was abandoned by Yuki when he was just two-years-old.

Harmless Like You is a beautifully written, many-layered novel that, at its core, tells the personal story of a mother and a son — a struggling artist and the child she left behind in pursuit of that art. But it also tackles topics that exist at the forefront of current American politics: immigration, multinational identity, male/female relationships, art, and freedom of self-expression.

“I didn’t mean to be political when I began,” Buchanan tells Bustle. “It turned out that in trying to write honestly about being a Japanese woman in New York in the 1970s or about being her mixed-race son, it was impossible to be honest without acknowledging that they were coming from a specific history and facing specific challenges. I never wanted to tell the reader what they should think or what should be done. The only thing I really wanted to get across is that these people are human, and they feel pain and confusion about who they are and who they’re meant to be. If that’s political, I guess I’ll have to get used to being called a political writer.”

When Harmless Like You begins, Yuki’s family struggles to straddle two worlds: their homeland, Japan, and their temporary residence in the U.S. Yuki isn’t completely at home in either place — not fitting in well with her American peers, and knowing her time in the U.S. will make her a social outlier in Japan as well.

“The experience of those living along margins is, of course, not identical. I am very lucky — I am not facing the threat that many Muslim Americans are experiencing now,” says Buchanan, who herself is the daughter of a Japanese-Chinese American mother and a white British father, and lives in London. “Obviously, there are many different margins, and different kinds and intensities of friction. The isolation Yuki feels is different from the life of a Chinese-American kid growing up in, say, Texas, which is different from a mixed-race kid born in London. Each person faces their own specific challenges. It would be presumptuous to claim that her story implies insight into every other experience of marginality. What I hope it does do is underline the need to listen to and support each other.”

"I hope that my book helps some people feel less alone. Harmless Like You is about isolation, being an outsider, and trying to make a home for yourself in the world."

Adding to Yuki’s complicated relationship with her heritage and her multinational identity is the fact that her father spent time in a Japanese internment camp — a subject that has become increasingly raw in American politics again, and one that Buchanan hardly expected to be so relevant when she first began writing the book.

“Three years ago, I had no idea that it would become so relevant,” Buchanan says. “I wish it hadn’t and that we were living in a time of peace and tolerance. Increasingly, I’m experiencing a deep discomfort with nationalism. There is nothing wrong with loving your country — not even with loving your country the most. But when you slide into calling it the best country, something dangerous happens. I love my brother more than anyone else’s brother. But if I went around calling him the best 23-year-old in the world, I’d be doing him a disservice. I’d be saying there was nothing he could learn from his peers and that he had no cause or way to grow.”

When Yuki’s family decides to return to Japan, Yuki, who is still in high school, chooses to remain in the United States — living with the lone friend she has made at school, Odile Graychild. But the more Yuki tries to fit in, the greater a distance is formed between herself and Odile. At one point, Yuki thinks: life would have been easier if she’d had a sister. If there’d been someone with whom living wasn’t an act of translation. When asked about this moment in Yuki's journey, Buchanan says:

“Forming a connection takes two people reaching out into the unknown. We’re constantly having to explain ourselves. It can be such a relief to be in the company of family, close friends, or lovers. Anyone who understands our shorthand. I think for those who are at the edges of a culture, that can feel a more pressing need.”

The author goes on to explain her own experiences of being asked to — or choosing to — act as her own translator. The strangers who approach her to inquire about her ethnicity. The gendered opinions men share about their perceptions of “oriental women.” A childhood misunderstanding between her and a teacher, when she brought a snack of dried seaweed to school. Another misunderstanding about Shintoism.

“It is possible to become exhausted by explaining. None of this was evil, but it was tiring,” Buchanan says. “Still, there can be a joy to the translation of experience. It’s probably part of the joy of writing and reading. Writer and reader work to cross that gap together.”

In such a highly-politicized time in history, when many writers are asking themselves what role they may or may not be able to play, and what power (or lack thereof) words have in an era of Trump, alternative facts, and 140-character rage-Tweets, Buchanan is a writer who takes the long view.

“Words have always had power and the wider they can be spread, the more powerful they are. In the 16th century the printing press magnified the voices of people fighting against the mainstream. Arguably, without it, the Protestant Reformation couldn’t have taken place. In the 17th century, William Prynne’s Puritan pamphlets so frightened the English government that they cut off his ears and branded his cheeks with “SL” to mark him as a seditious libeler. I am not a Protestant, nor a Puritan, nor a Catholic, but I believe we must always be aware of language’s power.”

“Lately, I’ve been thinking about the power of language both to help and harm,” continues Buchanan. “It allows us to fight back and resist. But we can also unwittingly hurt others. I’m thinking in particular of failures of intersectionality. As we fight against those who oppress us, we can accidentally silence and oppress others. We must listen more than we speak and read more than we write. Feminism needs to include women of color. Activism needs space for those with both physical and psychological disabilities. I don’t say this as a voice from on high, but as someone who herself is in the process of learning.”

The title of the novel, Harmless Like You, is pulled from the first photography series Yuki presents publicly, in the early 1970s. Her then-boyfriend, Lou, decades older than Yuki herself, describes Yuki as "harmless" and the term sticks. Ideas of harm and harmlessness form the heart of this novel, and Buchanan is mindful to note the distinction between harmlessness and powerlessness.

“Lou [calls Yuki harmless] in a moment of pity and that’s part of what stings. It’s cruel and patronizing, but part of why Yuki’s so hurt by it is she does feel both harmless and powerless. By naming the photography series that, she’s trying to grapple with what exactly it means to be harmless.”

“The difference between Yuki and Lou is not that he is harmful and she is harmless. The difference is that she tries to mitigate the harm she does. And even if she fails, that effort is a large part of what the book is about for me.”

This distinction between harmlessness and powerlessness is perhaps the most important conversation Harmless Like You invites readers into, especially today. In a country where having power has always, even unconsciously, required having the ability to do more harm to others than they are able to do to you, what can a novel like Harmless Like You — which navigates these issues on the micro level of girlfriend and boyfriend, mother and son, artist and self — say to readers?

“There is something that I’ve been thinking about and was thinking about as I wrote: be kind. This is something my characters often fail at. It is something I often fail at. But it’s the best goal I know. Be kind to others. Not everyone is good at articulating their fear and sadness. People will hurt you and it will suck, and you won’t always understand why. But they’re probably in some form of pain. Be kind to yourself — you’ll want to take care of people, but you also need to be gentle with yourself. Sometimes being kind to yourself means allowing yourself to be angry at the people who hurt you. But whenever possible, be kind. It’s easy to argue right or wrong until the sidewalks crumble under our feet, but being kind is never a bad place to start.