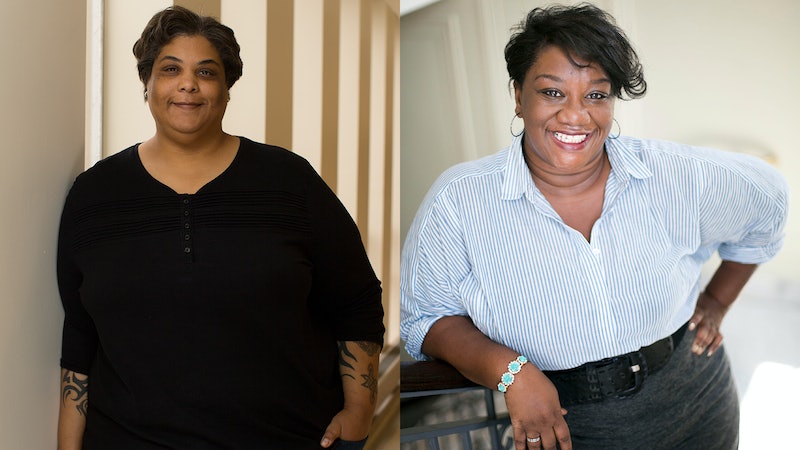 If you follow Roxane Gay on Twitter, you've probably known for weeks that she has a podcast in the works with Thick author Tressie McMillan Cottom. Today, Bustle is excited to reveal that Hear to Slay with Roxane Gay and Tressie McMillan Cottom is premiering on Tuesday, April 23 on Luminary, an app that offers $7.99 monthly subscriptions for unlimited commercial-free access to their lineup of exclusive podcasts, including Hear to Slay.

"Thus far, collaborating with Tressie McMillan Cottom has been a dream. She is fiercely intelligent, hilarious, and genuine. She always makes me think and when we talk, our conversations always go to the most interesting places. I am really looking forward to talking about the high brow, the low brow, and everything in between — the political landscape and 2020 election, what it means to be a black woman living in this world, our beloved HGTV, black entrepreneurship, the books we love and hate, music that slaps, the Marvel Cinematic Universe — I could go on, but I won't."

Both of the Hear to Slay hosts are acclaimed writers. Gay, best known for her essay collections Bad Feminist and Hunger, is a Guggenheim Fellow whose comic book series, Black Panther: World of Wakanda, was a 2018 GLAAD Media Award winner. She has a new comic book series, The Banks, coming soon from publisher TKO. Cottom is the winner of the 2017 Sociologists for Women in Society Feminist Activism Award. Her new book, Thick: And Other Essays, landed in stores in Jan. 2019, and was recommended by The New York Times Book Review, The Washington Post, Bustle, and more.

Hear to Slay with Roxane Gay and Tressie McMillan Cottom will be one of the first podcasts available on the Luminary app, which already has more than 40 shows ready to go. Other exclusives include podcasts by Hannibal Buress, Trevor Noah, Karamo Brown, and Russell Brand. The app launches April 23, but fans can subscribe today to its Premium service for $7.99 per month. The app is available on iPhone, Android, and on desktop. The app is free to download, and you can listen to non-premium podcasts without a membership.

Hear to Slay with Roxane Gay and Tressie McMillan Cottom premieres Tuesday, April 23, only on Luminary.