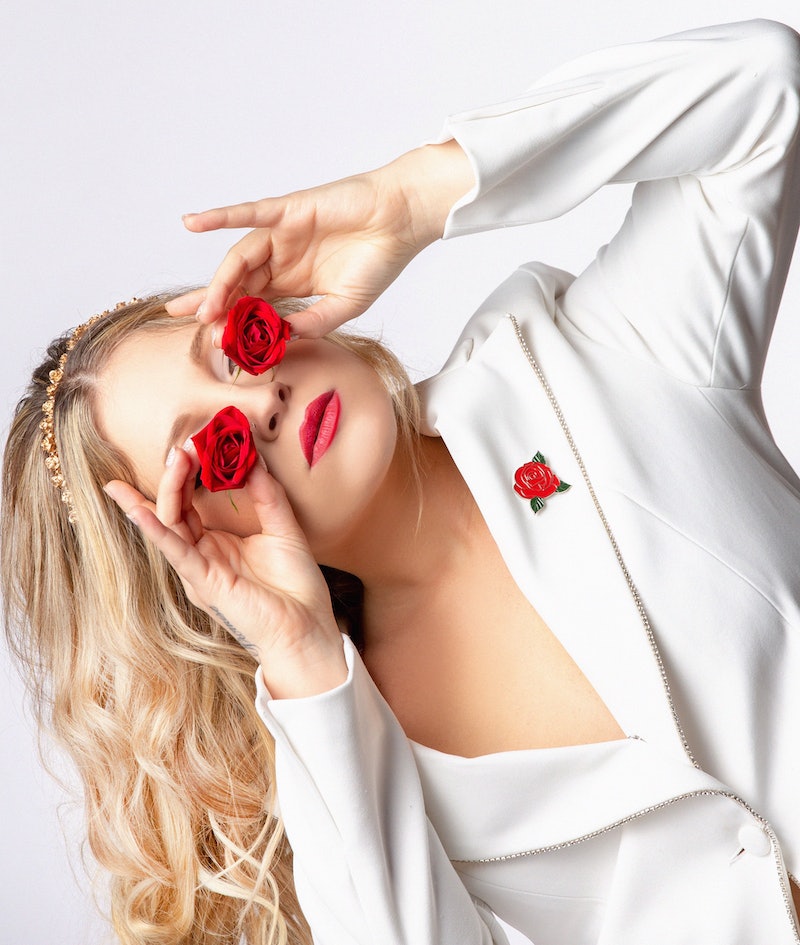 Pretty much any time that ROZES' new song, "Halfway There," plays in the Philadephia-born musician's presence, she sheds a tear. "I'm a very emotional person, so things hit me hard and randomly and at weird times," she shares with Bustle in a phone interview. So when she found out that the deeply personal track was chosen to be the official anthem of January's 2019 Women's March, you can imagine how many more of her emotions were in full bloom.

"I wanted "Halfway There" to be like a fight song a little bit and about how acknowledging the battle and being thrown into it is essentially your halfway mark, and then fighting it is the next half," explains the singer of the track's origin. "It ended up being about women's empowerment — and empowerment in general — because it started to feel like the fight was mine while I was writing it. It could be relatable to anybody."

In the chorus, ROZES (real name Elizabeth Mencel) powerfully belts the lyrics: "We’re already halfway there / Are we gonna finish what we started or just leave it here?" On Saturday, Jan. 19, those encouraging words will be blasting through speakers in cities nationwide as Americans take to the streets in an effort to "harness the political power of diverse women and their communities to create transformative social change" (as the Women's March describes as its mission on the organization's official website).

When the 25-year-old musician (who scored her first major hit collaborating with The Chainsmokers on 2015's dance hit "Roses") sat down in October to pen "Halfway There" with one of her brothers, heightened emotions were already omnipresent. Not only had ROZES' brother, Bel Heir bassist Paul Mancel's, wife Shea just been diagnosed with breast cancer, but the pain so many survivors felt in the wake of Brett Kavanaugh's Supreme Court confirmation hearings was still super raw. For the singer, it was all hitting way too close to home, and she wanted to inspire other women to keep fighting.

"I've had a lot of friends who have been victims of sexual abuse, and I, myself, am one of them," reveals the musician. "I've never shared my story, but it's easy for me to be able to write my songs and feel empowered in that way." She elaborates:

"When the #MeToo movement began and everyone was sharing their stories, I knew in that moment that I would probably never ever share mine. But just reading other people's stories and knowing that I had never been alone in this — ever — is so empowering. I think that, for girls who are like me and have kind of sworn to never say anything, it's empowering to see other women do it because it feels like they are speaking for us a little bit."

ROZES got to hear so many more of those inspiring stores when filming the "Halfway There" music video. After inviting her fans to participate in the Dec. 16 shoot in Philly, the singer "thought maybe 10 would come, and they would all be my friends." About 50 women showed up, however, again eliciting tears from the star.

"I was crying so hard," she recalls. "Just seeing these women walk in and supporting this and standing with me whether they know what the song's about or not, just being there to support me and support each other was so amazing."

One such participant was an MMA fighter with whom ROZES struck up a friendship. The singer says the woman recounted having "a year of feeling like she really needed something to empower her and to prove her strength." Appearing in the video ended up being just the medicine the fighter needed. "It's easy to lose hope in a fight, so I'm happy to be able to re-energize her fire," says ROZES.

After all, she knows all too well what it's like being a strong female in a male-dominated industry. Within the EDM world, ROZES says she feels she must hand over her songs to male DJs "for them to get anywhere" and that "it becomes this thing where somehow I'm only the singer on the song." When she sees men collaborating with other men, however, "they become best buds and tour together and do more songs together... that's never happened once for me."

As a result, the star is often is left feeling that "had I been a boy, maybe they'd be like, 'hey, bro, why don't you hop on this tour with me since we wrote this song together?'" Instead, ROZES says her experience with several male DJs has been that "this line [is] drawn where it's like, the relationship ends here. That's it, we're not friends, we're just collaborators."

Even growing up in Philly and frequenting the local Firefly Festival, ROZES noticed that there were never many women performers. In fact, she can't even recall there ever being a single female headliner. (Side note: This year's Firefly Festival headliners are also all male.) "It's so disappointing and heartbreaking to me because there are so many women who deserve to be on these stages and who can outsell a number of these men," the singer says.

Although she promises she'll "still be doing some collaborations within EDM," all of this has led ROZES to announce, "I wouldn't consider myself an EDM artist anymore." With "a bunch of songs piled up" — including one she wrote at Alicia Keys' She Is the Music camp — she hopes to put out an album featuring her new sound later in 2019.

"I'm maturing, I'm ready to talk about things that are more mature," she explains. "The new era is bringing the raw me and more of an acoustic-type pop, and I'm just super excited for it because I feel like it's where I've been on my journey to get to."

That, of course, includes her part in the aforementioned Women's March, which she'll attend for the first time this year in either New York City or Philly. "What we're looking for is the acknowledgment that women have been suppressed, and we need to be recognized as far as in our careers and our relationships and our families," she says of the movement behind the march. "Even with my grandfather, he grew up in a time when his mindset was that women should be housewives. So he sees snippets of my videos and will be like 'Wow, you women are really getting strong.' And I'm like, 'No, we have always been strong.' That's the thing. We need people to recognize that."

With "Halfway There" proudly leading that charge, it seems that everything will, indeed, be coming up ROZES in 2019.

More like this
Beyoncé & Madonna’s “Break My Soul” Remix Honors A Group Of Black Icons
By Stephanie Topacio Long
Christina Perri Had No Idea Her 'Twilight' Song Is On YouTube's Top 100 Chart
By Radhika Menon
At 14, D'Arcy Carden Was Sneaking Out To Parties & Crying Over Kurt Cobain
By Ivana Rihter
In Rap Sh!t, Social Media Has Main Character Energy
By Aramide Tinubu
Get Even More From Bustle — Sign Up For The Newsletter