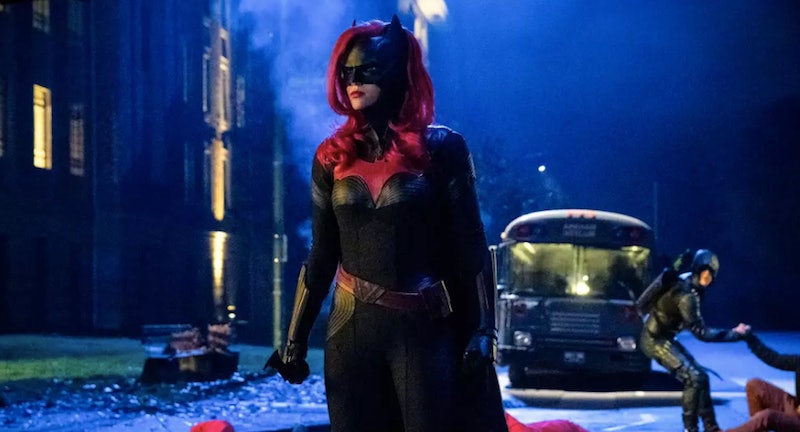 It's time to break out the Batdance. Why, you ask? Well, thanks to the CW the Batwoman is coming to a small screen near you. The Ruby Rose-led Batwoman pilot is officially happening, according to The Hollywood Reporter. And even better, it will be led by a Game Of Thrones director, just another sign that this Batwoman is going to be must-see TV.

On Jan. 3, THR reported that The CW ordered a pilot for the new drama, which will hopefully be joining their Arrowverse lineup, which already includes Arrow, The Flash, Supergirl, and Legends of Tomorrow. The pilot, from showrunner and writer Caroline Dries, who previously worked on The Vampire Diaries, will be directed by Game Of Thrones's David Nutter. He also directed the pilots of CW's Arrow and The Flash.

Should the Batwoman pilot get picked up to series, the female superhero would be the latest in a long line of DC Comic heroes to come to The CW. But, the show would also make a bit of important TV history. Batwoman would be the first-ever superhero series to be led by a lesbian character. Not to mention, the first to be played by an openly queer actor in Rose. Though it should be noted that Black Lightning's Thunder (Nafessa Williams) is DC's first black lesbian superhero, but the show is not technically in the Arrowverse and she is technically not the main lead.

Fans already got a taste of Rose's Batwoman on the 2018 Arrowverse crossover event "Elseworlds," in which she appeared for just a few scenes.

When Rose was cast as Batwoman in the 2018 Arrowverse crossover "Elseworlds," she talked about how much it would mean to her younger self to play Kate Kane, the Gotham crime fighter known as Batwoman. "Growing up, watching TV, I never saw somebody on TV I could identify with — let alone a superhero," Rose tearfully told Jimmy Fallon on an August episode of The Tonight Show.

Rose would later echo this sentiment in an Instagram post that pointed out the importance of LGBTQ+ representation on TV. She wrote that playing Batwoman was "a childhood dream." She continued: "This is something I would have died to have seen on TV when I was a young member of the LGBT community who never felt represented on tv and felt alone and different."

Not that it's been easy becoming this caped crusader. Rose actually quit Twitter in August after receiving backlash for her casting. Some took issue with Rose's lack of Jewish heritage, since part of Kate's identity is that she is Jewish. Others took aim at Rose's sexual orientation, claiming she wasn't a lesbian, which she defended on Twitter before leaving.

"Where on earth did 'Ruby is not a lesbian therefore she can’t be batwoman' come from – has to be the funniest most ridiculous thing I’ve ever read," Rose tweeted back in August, via LGBTQ Nation. "I came out at 12? And have for the past 5 years had to deal with 'she’s too gay' how do y’all flip it like that? I didn’t change."

With this latest news, though, Rose is getting a chance to put her own spin on this new version Batwoman, who according to CW's description of the show, via THR, will have a "passion for social justice and a flair for speaking her mind." While she'll be taking out the bad guys, she'll also have to "overcome her own demons before embracing the call to be Gotham's symbol of hope."

Fans will have to wait and see what happens to Rose's Batwoman after filming this pilot. Let's hope she sees her signal and gets a full season order.