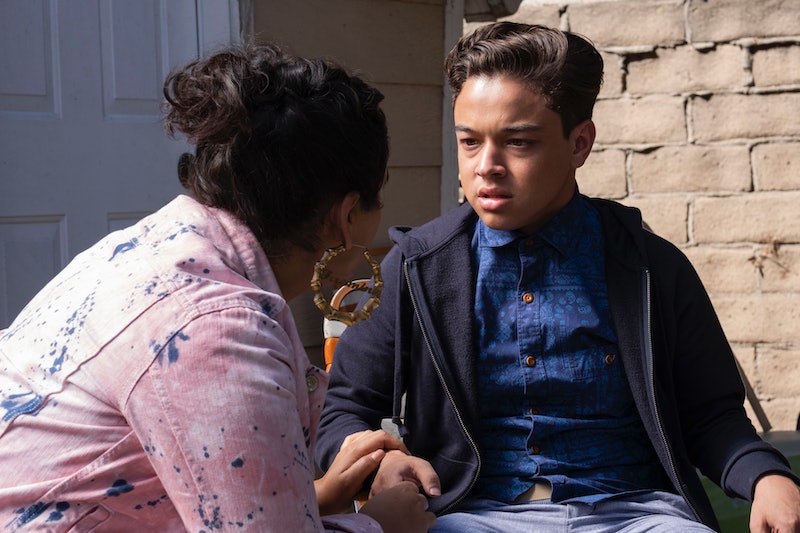 Spoilers ahead for On My Block Season 2. In the Season 1 finale cliffhanger, Ruby and Olivia were shot by a gang member who infiltrated her quinceañera. Fast-forward to Season 2 — Olivia has died and Ruby survived, but he struggles to adjust to life after the shooting. For the actors and creators, Ruby's PTSD storyline in On My Block Season 2 was crucial to portray in a grounded and real way.

"This season is all about what happens after your world is rocked and this is the fabric of your existence," series co-creator Lauren Iungerich tells reporters during a set visit in October 2018. "The tone of this season is just reminding us that this is not the suburbs, you know? And this is a real place and they are real kids who are dealing with these real issues."

In Season 1, Ruby (played by Jason Genao) is a math whiz and a dreamer who pursued an unrequited crush on family friend Olivia — she returned his affections in the fateful season finale. And Season 2 doesn't gloss over the fact that Ruby has been impacted by his trauma. Throughout the second season, Ruby's PTSD doesn't just last for one episode and it's not the focus of each episode either — instead, it manifests in a lot of different moments. In one episode, he refuses to go to church with his family, noting that he "isn't feeling God much these days," and, in another, he doesn't want to get out of bed at all. At a school dance, Ruby has a flashback when he hears the exact song that was playing when he and Olivia got shot.

The National Center for PTSD lists the following symptoms for Post-Traumatic Stress Disorder: experiencing flashbacks and nightmares, avoiding reminders of the traumatic event, having changes in beliefs, insomnia, and trouble with concentration, among others. According to a 2012 study published in the Journal of the American Academy of Psychiatry and the Law, the rates of PTSD found in "impoverished, high-risk urban populations within U.S. inner cities" are as high as in war veterans, due to being exposed to violence and "unexpected death."

Genao says that Ruby's PTSD in Season 2 has made the character a more mature 14 year old — who forges an unexpected bond with Oscar, Cesar's older brother and a member of the Santos gang. "When something like that happens, it just it sort of kills some sort of innocence or child-likeness," he tells reporters during a set visit last fall. "He tries to take himself out of the sadness and the darkness of this situation but you can’t completely take yourself out, so we see a flow of really being okay and not being okay."

Ruby experiences PTSD symptoms, but he also has moments where he says he feels like himself again — he returns to organizing parties for his family (and even one for the Santos), he flirts with one of Monse's Brentwood friends, and he helps Jamal with his RollerWorld money scheme.

Showing a realistic flow of emotions for Ruby was important to series co-creator Eddie Gonzalez, who was born in Compton, California, and based On My Block on his experiences growing up in nearby Lynwood. "I have family members who’ve dealt with this stuff for years — 7 years, 8 years after a loved one passed away or they were shot," he tells reporters on set. "This doesn’t go away over the course of a year."

And hopefully fans will continue to see Ruby heal and grow in Season 3.