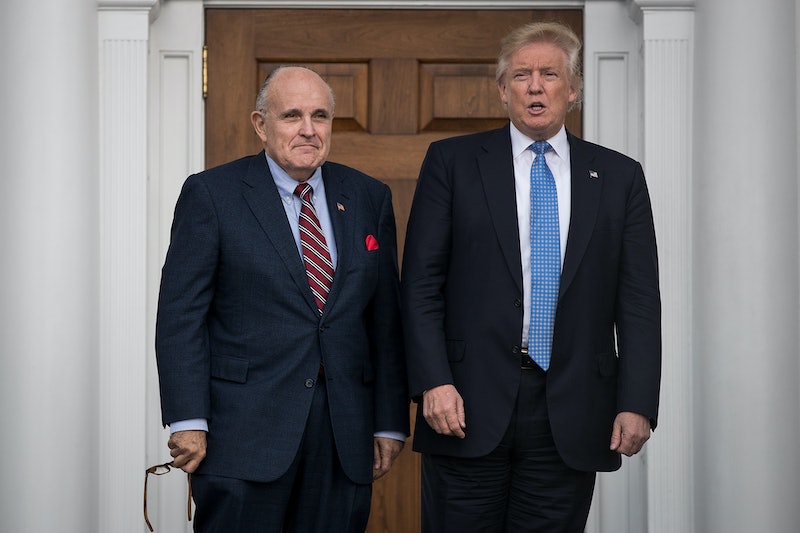 Rudy Giuliani, President Donald Trump's attorney, sent a tweet in defense of his boss on Friday. Soon enough, an oversight in Giuliani's tweet had it linked to an anti-Trump website. Giuliani was criticizing the timing of indictments filed by Special Counsel Robert Mueller's team, writing in the tweet: "Mueller filed an indictment just as the President left for G-20.In July he indicted the Russians who will never come here just before he left for Helsinki.Either could have been done earlier or later. Out of control!Supervision please?"

But in his attempt to keep his thoughts compiled in just 280 characters, Giuliani deleted many spaces, leaving his tweet vulnerable. There are multiple sentences that run together, but only one created an available URL. By Friday night, a new website using an inadvertent URL from Giuliani's tweet was created. The website is a dark gray with white letters reading "Donald J. Trump is a traitor to our country."

The former mayor of New York City's tweet remains live as of writing, but it wasn't the only odd tweet Giuliani sent on Friday. As Newsweek pointed out, after tweeting about news regarding former Trump associate Michael Cohen's plea deal, Giuliani tweeted, "Kimim ° has f,"

It's unclear what Giuliani was referring to.

This isn't the first time Giuliani has sent an errant tweet and left it up. One of the more memorable tweets was just one word. On July 29, Giuliani tweeted, "You" and nothing else. The tweet spurred many jokes using "you" as well as criticisms of Giuliani and snarking against the president. That tweet is still on Giuliani's profile, too.

But confusing tweets aren't Giuliani's only Twitter faux pas. On Nov. 1, just a week before the contentious midterm congressional elections, Giuliani endorsed the wrong candidate on Twitter. Giuliani tweeted, "Don James is running for Senate in Michigan. He is a combat veteran, a successful business man and believes in lower taxes, more jobs, effective health care and safety and security. He’s the future of our party. Let’s make that future now.. Vote for Don James."

The Republican Senate candidate in Michigan was named John James. James appeared to take the mistake in stride, though. He replied to Giuliani's tweet to thank him. "Thanks, Randy! While you were leading NYC through the aftermath of 9/11, I was at West Point training to bring terrorists to justice," James tweeted along with a campaign ad.

The Michigan Department of State reported that James lost to Democratic candidate Debbie Stabenow, 52 percent to 46 percent. There's no way to know how such an odd error impacted the election, but a general rule of campaigning is to correctly identify the person being endorsed. The incorrect tweets are still up.

In August, Giuliani also incorrectly identified the former top cop in Chicago, Garry McCarthy, as Jerry McCarthy in tweets criticizing Democratic leadership for the gun violence in the city. Then Giuliani sent a follow-up tweet again calling him "Jerry McCarthy." About three hours later, Giuliani finally sent a tweet with the man's correct name of Garry, but the incorrect tweets are still up on his profile.