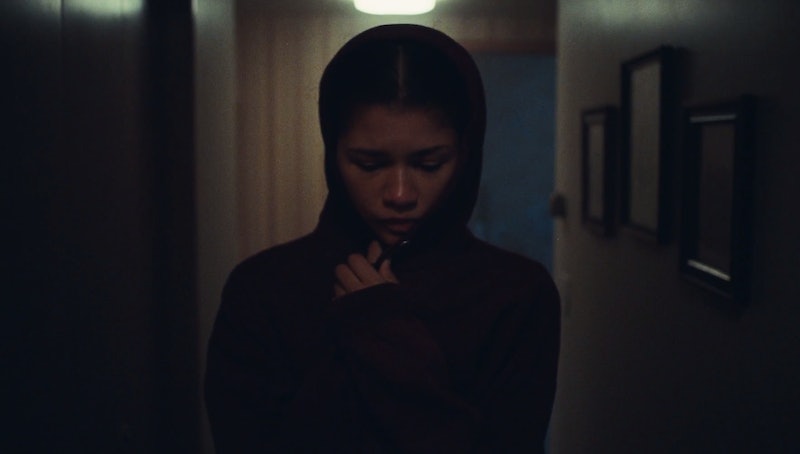 Major spoilers for Season 1 of Euphoria ahead. Throughout Season 1 of Euphoria, Zendaya's character, Rue, has had a signature, androgynous style of baggy clothes and, more often than not, a maroon hoodie. But this sweatshirt wasn't just a staple clothing item in her closet. In the Season 1 finale, the backstory of Rue's Euphoria hoodie was finally explained, and it was heartbreaking. It belonged to her father who died from cancer, and she's had it since the day he passed away. And now you can buy Rue's hoodie and own a physical part of Rue's story.

The sweatshirt was a crucial part of Rue's identity in Season 1. Not only was it a huge part of her look, it turns out that it might be one of Rue's most valuable possessions. Not only that, but the hoodie has also come to mean a lot to Zendaya. On the day of the finale, the actor shared a photo of herself wearing the red hoodie, writing, "Wore Rue’s hoody today, haven’t worn or washed it since we wrapped. Safe to say I’m deep in my feels lol."

Clearly, Rue's hoodie is special to her, and it's also become very special to fans, which is why they'll be happy to hear that Rue's hoodie is now available for purchase, thanks to HBO's official shop. Of course, this hoodie is slightly different than the one she wears in the show. The most obvious difference being that this one says "Euphoria" on the left side, and it'll be way less worn in. But that just means fans will be able to rep their new favorite show, and they'll have until Season 2 to fully break it in.

The meaning of Rue's hoodie was revealed at the end of the Season 1 finale, titled "And Salt The Earth Behind You," Rue and Jules suddenly parted ways after Rue changed her mind about running away, but Jules still left on the train. Then, as she sobbed her way home, viewers saw flashbacks of Rue's life, which culminated in Rue taking her father's maroon hoodie from the bed he had just died on, before showing her in the present, relapsing on her bed.

The reveal about Rue's hoodie's origin was heartbreaking for fans. And they took to Twitter to express their dismay.

One fan on Twitter, @helenrwu, went so far as to say that the origin of Rue's hoodie is even more emotional than the story behind Hodor's name from Game of Thrones.

Meanwhile, ever since the reveal about the hoodie, fans have been going back and watching previous episodes of Euphoria to find clues about its significance. One fan, @_rosemanis, noticed that Rue's dad was wearing a similar sweatshirt on the night Rue was born, as seen in a flashback from episode one.

Fans will likely be rewatching Season 1 until new episodes resume, which could be a while. So, if you want to be able to curl up into a nice, comfy clothing item when you marathon and wait for Season 2 of Euphoria to start, then you're going to want to get a hoodie of your own.