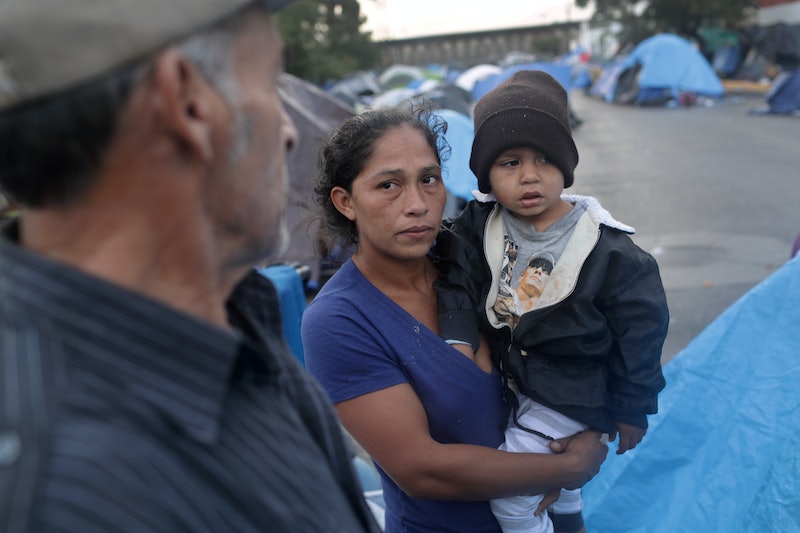 The Trump administration has a new policy to address the thousands of migrants who are waiting at the U.S.-Mexico border to seek asylum. After first slowing down the pace of application processing, which has led to long wait times, the Department of Homeland Security's new rules for asylum seekers at the Mexican border force people to wait in Mexico while their applications are processed.

Those seeking asylum were previously allowed to enter and remain in the United States until a decision was made about their case, which immigrant advocates say provides asylees with relative safety. In a Thursday statement, Homeland Security Secretary Kirstjen M. Nielsen hailed the policy as a "historic" attempt to "bring the illegal immigration crisis under control." But immigrant advocates argue otherwise.

"The Trump administration's plan to close our borders to asylum seekers received about as much planning and forethought as the decision to withdraw from Syria," Tom Jawetz, the Center for American Progress' vice president of immigration policy, says in a statement to Bustle. "Every move they make subjects more vulnerable asylum seekers — including children — to the threat of violence and death and does nothing to comport with the rule of law."

From now on, asylum seekers will be given a "notice to appear" when they have a date for their hearing in a U.S. immigration court. They will then be able to come to the United States for that hearing and use American lawyers, the DHS announcement explains. If the judge approves their case, they'll be able to stay. If not, they'll be deported back to their home country.

This policy only applies to people coming through Mexico; the United States already has a Safe Third Country Agreement with Canada, which means asylum seekers must apply for status in whichever country they first entered. The new rules also mean people who are found to have crossed illegally into the United States from Mexico "may be returned to Mexico for the duration of their immigration proceedings," according to the DHS announcement.

Under the new policy, migrants could be waiting in Mexico for years while their asylum applications are processed, as the proceedings aren't typically quick. According to a statement from Secretary of State Mike Pompeo, the Mexican government has decided to allow waiting asylum seekers to get humanitarian visas and employment authorization privileges in the meantime. The new DHS policy is effective immediately, according to Pompeo.

Immigration advocates argue that Central Americans aren't as safe in Mexico as they would be in the United States, though. Two Honduran teenagers who came to Mexico as part of the migrant caravan were murdered on Sunday, as the Guardian reports. Jawetz tells Bustle that letting migrants into the United States until their hearings "allows people to be safe during the pendency of proceedings." He adds that doing so is "consistent with our laws and traditions."

Margaret Huang of Amnesty International agrees, telling Politico on Thursday, "Many people seeking asylum in the United States face discrimination, exploitation, sexual assault, murder, or the possibility of being disappeared while traveling through Mexico or while forced to wait for extraordinarily long times in Mexican border towns."

To explain the new DHS policy, Nielsen said in her Thursday statement that "aliens trying to game the system to get into our country illegally will no longer be able to disappear into the United States, where many skip their court dates."

However, Department of Justice statistics show that only 11 percent of asylum seekers declined to show up to their hearings in the 2017 fiscal year. Under a pilot program that was canceled by Immigration and Customs Enforcement last year, 100 percent of asylees were present at their hearings.