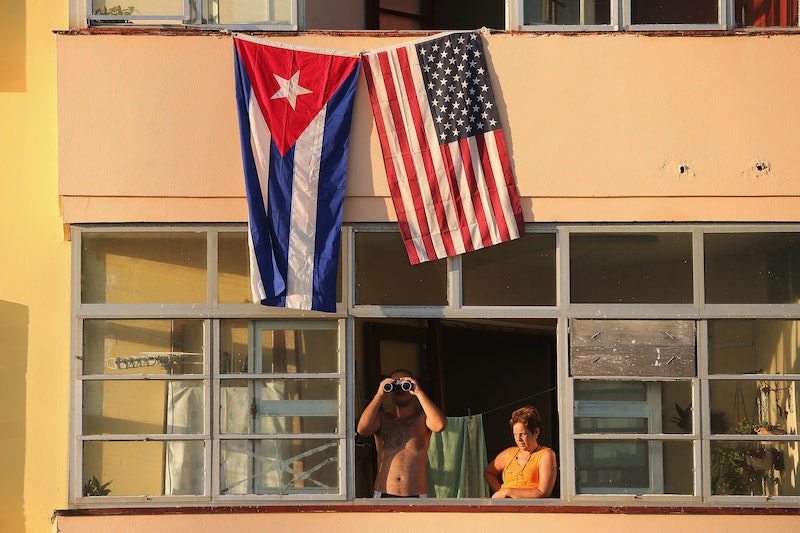 If you're thinking of planning a trip to Cuba, you might want to double check your plans to make sure your trip is still allowed under new restrictions announced by the Trump administration on Tuesday. The New York Times reported that rules for traveling to Cuba are changing — including one of the most popular regimens under which Americans visit the island: "people-to-people" visits.

Restrictions on cruise ships, fishing boats, and private yachts visiting Cuba were also announced, according to CNN. Americans will not be given permits to visit that way. NPR reported, though, that plane trips to the island shouldn't be affected — commercial flights from the United States carried some 893,011 people in 2018, according to the Department of Transportation. Several U.S. airlines told The Times that they would be assessing the order.

Also if your "people-to-people" trip — either accommodation or flight — was booked before June 5, you might be in luck, according to CNN. The Treasury Department said that "certain group people-to-people educational travel that previously was authorized" will continue to be authorized" because they are grandfathered in.

For those who still want to visit Cuba, options do remain — there will just be more restrictions in place, according to The Times. "Support for the Cuban people" trips remain an option. There are more rules for this type of trip though, including meeting with local business owners, artists, etc. Staying in a hotel is also not allowed.

Statements from the Commerce Secretary, Treasury Secretary, and the State Department all took Cuba to task while announcing new restrictions on travel to the island.

"Cuba continues to play a destabilizing role in the Western Hemisphere, providing a communist foothold in the region and propping up U.S. adversaries in places like Venezuela and Nicaragua by fomenting instability, undermining the rule of law, and suppressing democratic processes," Treasury Secretary Steven Mnuchin said in a statement Tuesday.

Of all those affected, cruise ship passengers are expected to be the hardest hit. According to the Associated Press, travel by cruise ship to the island had increased by 300% in the first months of 2019 over 2018. The Commerce Department is putting a stop to that. "Cruise ships as well as recreational and pleasure vessels are prohibited from departing the U.S. on temporary sojourn to Cuba effective tomorrow,” the Commerce Department said in a statement obtained by the AP on Tuesday.

If you had a cruise scheduled these days, you should contact the company directly. Royal Caribbean cancelled all sailings Wednesday and Thursday. Norwegian, meanwhile, was still working things out.

"We are closely monitoring these recent developments and any resulting impact to cruise travel to Cuba," Norwegian Cruise Line said in a statement obtained by the Associated Press on Tuesday. "We will communicate to our guests and travel partners as additional information becomes available."

In addition to the "support for the Cuban people" trips, Americans can receive permits for travel with university groups, for academic research, journalism and professional meetings, according to the Associated Press. It's also important to note that none of the announced changes apply to Americans with family in Cuba; visits to family members are still allowed.