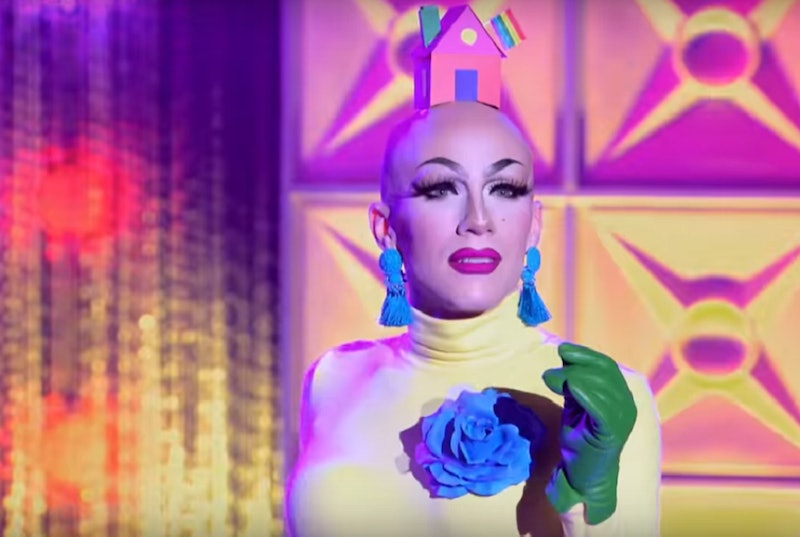 It was clear from the second that RuPaul's Drag Race season 9 winner Sasha Velour first entered the show with a shrill, dazzling scream, that we we were witnessing something revolutionary. With an aesthetic that appeared to take bold cues from pop culture, and high couture, to a performance style that appeared to riff on dadaist art, the intellectual drag superstar felt truly radical. So when Sasha became the winner of Drag Race Season 9, it felt only natural that her acceptance speech was a rousing one for the LGBTQ+ community to hear, as she proudly told the audience, "let's change the motherf*cking World." And in an email interview with Bustle, Sasha reveals exactly how drag, and her own drag performance, can do exactly that, as a positive, political act.

"I think that all drag is revolutionary. In some ways, the thing that defines my drag is how I honor those revolutionary, deeply political traditions," Sasha explains. "Drag in a historical sense has always been about taking a political stance. It isn’t just about presenting gender against the rules of society. It’s about inspiring queer youth to go out into the world and be leaders."

Suffice to say, the way in which Sasha continually pushed multiple boundaries throughout Drag Race was certainly inspiring in and of itself. With her performances, the superstar challenged a number of drag and societal norms to deliver a persona that felt refreshingly disruptive.

Sasha celebrated her queerness, and queerness in general, in a way that felt proudly offbeat and weird. So it's no surprise to discover that Sasha's origins are as complex and progressive as her act is. Sasha says:

[Sasha] is intellectually and politically minded. She is kind and loving. She has a sense of style that is part illustrator, part androgynous, but still feminine ... I like to look for inspiration in non-typical places. I find creativity along the margins. There is no one preference. It’s a combination of what speaks to me and I like to be able to paint a picture with my drag aesthetic. Fashion can communicate all sorts of emotions and that’s really what I look for.

For the politically minded fan of Sasha's who is perhaps looking for their own inspiration along the margins, the drag superstar shared some essential reading material with which to get started. The library is officially open, ladies. But, put down those shades, because this time it's open for some actual reading.

"Get yourself a copy of Trans Liberation: Beyond Pink or Blue by Leslie Feinberg. Its powerful and it’s what actually inspired me to get into drag. Babel-17 by Samuel R. Delany. This book changed my life! It’s a sci-fi romance that is infused by elements of gender, identity and language," she says. Sasha's final book recommendation is Armistead Maupin's Tales of the City, which she describes as being, "very queer and paint[s] a beautiful and idyllic picture of living a fabulous life just the way you like it." Which means that we officially have the start of a Sasha Velour book club, people, and I'm officially on cloud nine.

As fans may well expect from the artsy, political queen, Sasha has a lot of plans for the future, and some of them may even feature a highly anticipated collaboration with a certain Season 9 fave. She explains:

Just after we wrapped the pre-finale episodes, Shea and I got together for a photo shoot based on our lesbian news anchor characters for my magazine, 'Velour'. We will definitely keep working together and who knows, maybe we can revive our "Teets and Asky" characters again! ... I have my monthly show in Brooklyn that I will continue to do while I tour with my live show...I want to translate my vision into new and different mediums like my magazine. I’m also starting a nonprofit with the goal of raising money to help queer communities."

Evidently, Sasha is here to change the world in more ways than one, and with her stunning aesthetic, and ravishing lip sync skills, it seems like she could even take over the World, too. Either way, I'm gonna be over here, wearing a crown, and screaming with delight into Sasha's recommended reading list while I wait for her revolution to start. Something tells me we won't have to wait too long, though.