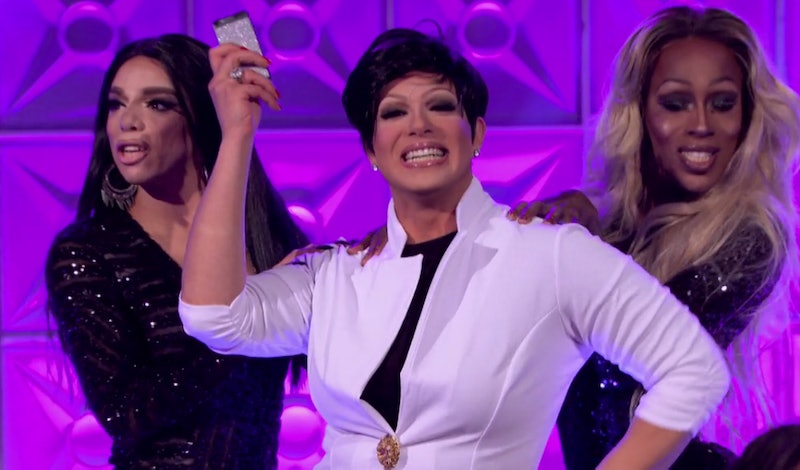 On Friday night, shade levels were on high alert during the RuPaul's Drag Race season 9 reunion special. But all cattiness and Miss Congeniality disputes aside, there were also some genuinely sweet throwbacks to the season's most standout moments. As highlighted in the episode, there's one drag superstar and challenge in particular that are destined to go down in Drag Race herstory, and that's Alexis Michelle's performance as Kris Jenner in Kardashian: The Musical. Ru and the panel of judges were instant fans of Alexis' take on the iconic Kardashian Momager, as were viewers watching at home. But the performance also apparently drew the admiration of another unexpected fan: Kris Jenner loved Kardashian: The Musical, too.

During Friday night's reunion episode, Ru commented, "Alexis, you did a mean Kris Jenner, and I'm not the only one who thinks so." Before a video was shown of Kris sharing her love for the show, the season, the episode, and Alexis herself. In the video, Kris enthused,

"Hey everybody, best season ever. And the best part the Kardashian musical, that I loved. And Alexis Michelle, your Kris Jenner was dope. So, have fun you guys, and condragulations."

OK, so does this mean that Alexis gets to be an honorary Kardashian now? Because I'd be so down to see that happen in the next season of Keeping Up With The Kardashians.

A pitch-perfect reality TV show parody of Hamilton, Kardashian: The Musical was a masterstroke of genius. And though there was some notorious fighting over who was going to be Blac Chyna in the episode, it was quite possibly one of the finest challenges and episodes, not just of season 9, but of Drag Race overall.

Alexis might not have made it to the esteemed top 4 of Drag Race, but the way she managed to embody everything that makes Kris such a compelling reality star was incredible to watch. She didn't just manage to nail Kris' iconic, put-together look, she also managed to perfect her mannerisms and project her larger-than-life public persona. So is it any surprise that the real Kris loved it as much as we do? I think not.

In April, Kris even tweeted her hilarity at the prospect of the episode, prior to it airing. Thankfully for everyone, it certainly seems as though she enjoyed the entirety of the challenge once she watched it in full and took it all in great humor.

All that I hope is that the entire extended Kardashian and Jenner family was able to sit down together, share a bowl of salad, and enjoy the dizzying delights that Kardashian: The Musical had to offer. Fingers crossed that we may also get to enjoy such a beautiful moment in a future episode of Keeping Up With The Kardashians. Though, obviously, I'm not holding my breath on that one.