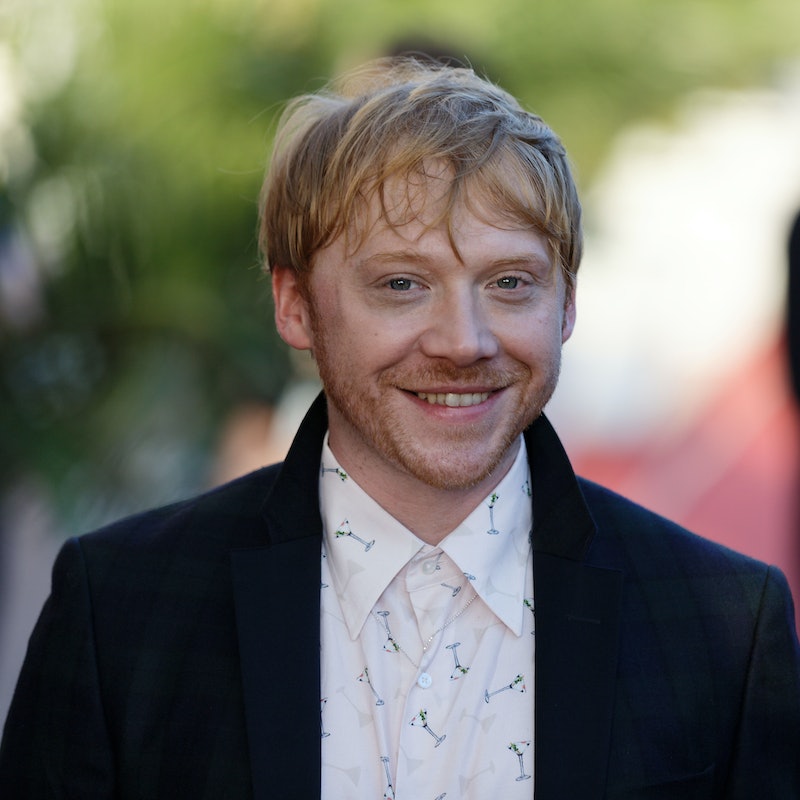 You're a dad, Ron — err, Rupert! Harry Potter star Rupert Grint and longtime girlfriend Georgia Groome have welcomed their first child. The couple announced the news in a joint statement on Thursday, per E! News, saying that they were "delighted to confirm the birth of their baby girl." (A girl, yes, just like Ron Weasley!) The statement continued, adding that the new family of three "would please ask that you respect their privacy at this very special time."

The happy news comes almost one month after Grint and Groome confirmed that they were expecting their first child. At the time, they released a similarly brief statement, confirming the news and requesting privacy. So fans shouldn't expect to hear much more from the couple about their new bundle of joy — or their relationship for that matter. Grint and Groome, both actors, have been reportedly dating for about a decade, and they've successfully avoided putting their relationship in the spotlight for just as long. Though there were rumors that the two had tied the knot after Groome was spotted wearing what could have been a wedding band last year, according to E! News, they never confirmed or denied the rumors. Clearly they prefer to keep their private lives private.

In other words: don't hold your breath for baby pics — or any announcement of their daughter's name. If they have named her, that is. And if not, no doubt Harry Potter fans will have a suggestion: Rose, which is the name of Ron Weasley's daughter with Hermione Granger in the controversial Harry Potter epilogue. Rose Grint does have a nice ring to it, but fans shouldn't hold their breaths. Speaking to The Guardian in 2018, Grint was asked if he'd consider naming a son Ron, and said, "It's quite a good name, but probably not. And Grint's a tough name to pair a one-syllable first name with." Rose, of course, is also one syllable, so it might already be disqualified. It might be for the best, some things are better left in the books.

More like this
Rupert Grint Just Shared A *Major* Update About Ron Weasley’s Future
By El Hunt
Paris Hilton Just Shared The First Photo Of Her Baby
By Sam Ramsden
Hilary Duff Is “Optimistic” About A 'Lizzie McGuire' Reboot
By Alyssa Lapid
'Friends' Star Maggie Wheeler Offers Support To Matthew Perry After Reading His Memoir
By Alyssa Lapid
Get Even More From Bustle — Sign Up For The Newsletter
From hair trends to relationship advice, our daily newsletter has everything you need to sound like a person who’s on TikTok, even if you aren’t.