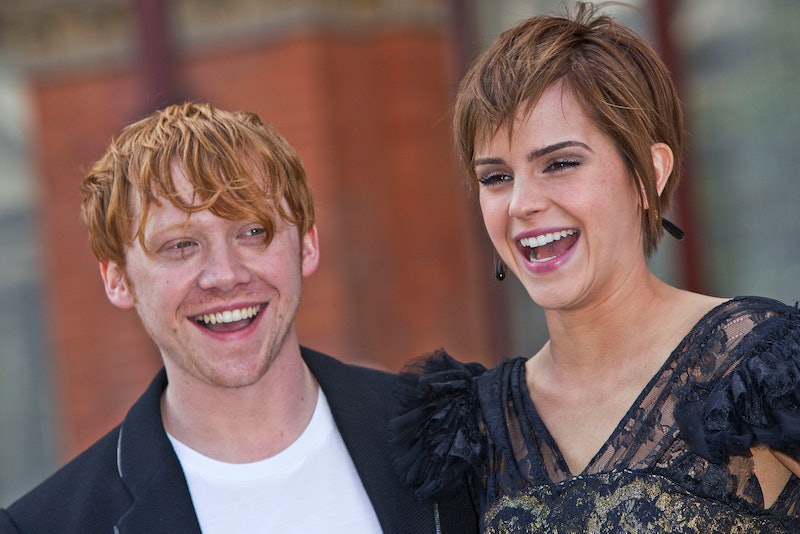 It certainly doesn't feel like it, but it's been eight years since Harry, Ron, and Hermoine were last on the big screen. Rupert Grint can't seem to believe it either, as he discussed with MTV's Josh Horowitz on the latest episode of his podcast Happy Sad Confused. The actor was mainly there to talk about his upcoming Apple TV+ series Servant, but he also spoke about the decade he spent being a part of the iconic wizarding trio. One moment that stood out was Rupert Grint's memories with Emma Watson, which included them being tutored together during filming.

The main cast started filming the series when they were all around 11-years-old, so obviously, they couldn't switch between going to set and going to a regular school. Like other child actors, they were provided with tutors on-set that would teach them the curriculum suited to their age. But after Horowitz brought up the age difference between Radcliffe, Watson, and Grint, the actor talked about how he was tutored alongside Watson despite being two years older than her.

"I don't know what this says about where I was on the curriculum, but I was schooled with Emma," he said. "She's pretty smart. She's just not supposed to be that smart [at that age]." Wow. This is basically proof that Emma was born to play Hermoine — they're as smart as each other.

Grint mentioned in during the podcast that he left school as soon as he could, but Watson continued to apply for further education and landed a place at Rhode Island's Brown University, which she graduated from in 2014. As the Telegraph reports, she "received her bachelor's degree in English literature", which she began studying in 2009 so she would have still been filming or just finished filming the final Potter instalments.

When she started at the uni, Watson "hoped that the broad curriculum offered by US universities would help make up for lessons she missed while making the Potter films." As Grint said during the podcast, the kids had a minimum of three hours of one-on-one tutoring, and it seems that Watson also studied her A and AS Levels during that time, too.

Watson went on a study hiatus in 2011 to focus on her film career, as the Telegraph writes. But she later enrolled "at Oxford University as a visiting student to read English and Worchester College" later in the year.