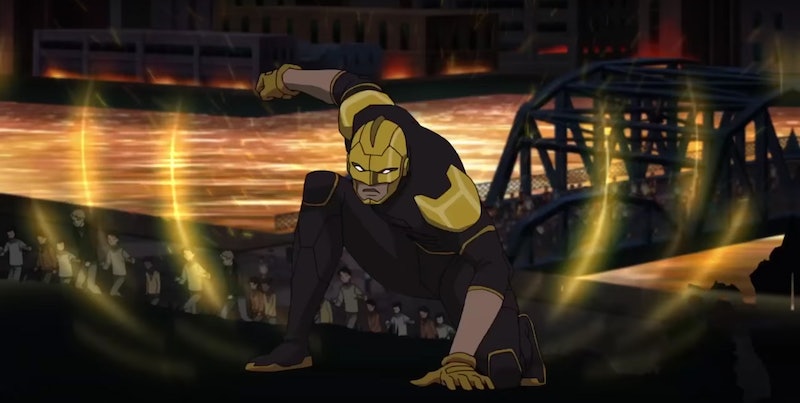 Spoilers for The CW's Arrow-verse crossover "Crisis on Earth-X" ahead.

The best part of The CW's big Arrow-verse crossover "Crisis on Earth-X" wasn't all the doppelganger madness or the impromptu double wedding or even the planned heartfelt WestAllen ceremony. Out of left field, a new character stole the hearts and attention of fans immediately: The Ray aka Ray Terrill (Russell Tovey), a superhero with light-based powers who came into contact with the Arrow-verse heroes when they were sent to a concentration camp on the Nazi-led Earth-X. Things got dark, fast, as the group was lined up for execution, including the newly-introduced Ray, who was imprisoned by the Nazis for being gay. But then the Earth-X doppelganger Citizen Cold aka Leo-X (Wentworth Miller) showed up at the very last second to save everyone from being on the wrong side of Nazi machine guns — and compliment Barry's (Grant Gustin) superhero suit.

So much happened in a short amount of time, but viewers quickly learned that cheerful Ray and sassy Leo were in love, fighting the good fight, punching out Nazis and making us swoon with every longing glance and kiss. Who knew that in a four-hour movie about the weddings between two fan-favorite The Flash and Arrow couples, an entirely new couple would put all the others to shame? But just as soon as we fell in love with Ray and Leo's love, it was ripped away from us: Leo stayed behind on Earth-1, presumably to help his doppelganger buddy Mick Rory (Dominic Purcell) open up, while Ray went back to Earth-X to keep on fighting Nazis.

While only one-half of this precious couple is sticking around the live-action Arrow-verse, The Ray isn't going away anytime soon. In fact, he's about to star in his own show. CW Seed's animated series Freedom Fighters: The Ray drops this Friday, and Tovey's out-and-proud superhero is the first openly gay comic book hero to lead a series. Ever. And it's about. Damn. Time.

"Oh my god, yes," Tovey enthusiastically cheers to me about finally breaking that barrier. "I'm incredibly proud and I feel very fortunate that I get to be that person." But the actor, recently seen on Quantico and an out gay man himself, already feels the intense pressure that comes with being the first gay superhero to lead a TV series.

"You're putting that character out there and he has the opportunity to become a beacon or reference point going forward for this genre, for the world in general," Tovey says, getting serious. "This is incredibly important and it's crazy that we're in 2017 and this does still feel like something that is cutting edge and new and never seen. Hopefully it will be the catalyst for more representation and more visibility and more characters to the point where it comes more on par and accepted across the board as being the norm."

Freedom Fighters: The Ray delivers the LGBTQ representation that comic-book fans have been craving, because it doesn't just follow Ray's heroic antics. The limited animated series also spends a lot of its time slowing down and following Ray's more human side as he lives life as a gay man.

"We start off with seeing The Ray as the superhero on Earth-X, which was in the crossover live-action episodes, but on our Earth he's Ray Terrill," Tovey explains. "He's a lawyer who helps people who are in the minority, who are in the margins, who are struggling to get accommodations. He's a really good guy but he's lonely. He's got a very good friend but he's shy and work is the most important thing to him."

Tovey's voice softens as he continues. "He doesn't have love in his life. We find him suddenly discovering that in a parallel world he's a superhero, and what that brings out in him and what confidence that builds, how he grows on a human level from this experience. It's just a beautiful story of a guy really embracing who he is and accepting that and how that makes him a million times more confident and happy and secure."

That includes embracing both his superhero alias as well as his sexuality, as he struggles with coming out to his family at the beginning of the series. "It's a great message for people who are watching, and what's amazing about animation is you have kids watching and adults, [seeing] what it really means to be truly accepting of yourself and what kind of peace you find with that and how that can nourish and enrich your life and make you a better person," he says.

When I can't stop myself from turning the conversation into a gush fest about how much I loved Ray and Leo's relationship in the crossover, Tovey lets out an "Awwwww."

"It was an incredible thing," he says. "When I read that in the script, I felt so privileged and proud that I was going to be able to portray that relationship with Wentworth Miller. I remember speaking to Wentworth when we started filming together and we both realized the enormity of it, what the responsibility of it was and what it meant in this world and genre."

He pauses, then continues, "And what the ripple effects would be from that connection between those two characters, two gay superheroes existing on network TV, played by two out gay actors. It was incredibly special and important."

When I press him for any hint or sign that Ray and Leo will reunite on the animated series, he freezes up. "Whether we see that in the animation or not, I'm not allowed to say; I'm not allowed to give out spoilers," he tells me, not exactly breaking my heart but not exactly giving me hope, either. "But we will see Ray Terrill, The Ray, find love and connection and allow himself to let love into his life. He's been closed off to that. And just embracing who he is, that's the journey he's on, understanding and acceptance and what that does for someone."

Tovey does, however, make me feel a little better by agreeing that Ray and Leo are end game. "I think their story has been cemented," Tovey says. "I think they are bonded beyond any other potential relationship. It feels like what you saw in the show is something that, for both of them, is one of the most important connections they will ever have in their lives."

As of now, Ray will be seen moving forward only in animation, but Tovey is game to reprise his role in live-action in the future. "I think there is so much more there, untapped," he says. "It's a mine of magic there to be unearthed."

And after getting thrown head first into the CW's DC universe, (the network sent him a care package with comics all about The Ray) filming the live-action crossover and then recording the animation at the same time, Tovey's not ready to give up being The Ray anytime soon.

"It was all a bit of a whirlwind when it happened and all the mediums were thrown at me at once," he says. "It was incredible to get catapulted into this world and bombarded with this amazing character. It was so easy to get swept up in the excitement of what he meant and what he was going to be and his potential."

He's even ready to debut Ray in even more mediums. "I want to do it all!" he says, his voice getting louder as he gets excited. "I think there should be computer games! Aside from the importance of being an out gay superhero in the world we live in now, he's also just a really cool dude. He's got so much to give. If he can become more mainstream, how amazing would that be for the world?"

Not only does Freedom Fighters: The Ray bring about a new era to LGBTQ representation in the superhero TV world, the animated series also touches on other real-life issues in a groundbreaking way for a comic-book show: by actually talking about issues like immigration head-on, and not through an allegory.

"It means everything to be on the right side of history and be at the forefront of changing perception and acceptance," Tovey says. "I feel so proud. I've always been very proud and out and confident with who I am and always try to put that out in the world, so to portray this guy who seems to be doing the same thing ... comic books have the ability to reflect the world we live in and to potentially affect change without people realizing that it happened, because its sneaks in there cheekily and make a big impact. This guy feels like he can really make a difference and that is the best feeling ever." He'll even punch out some Nazis along the way, too.