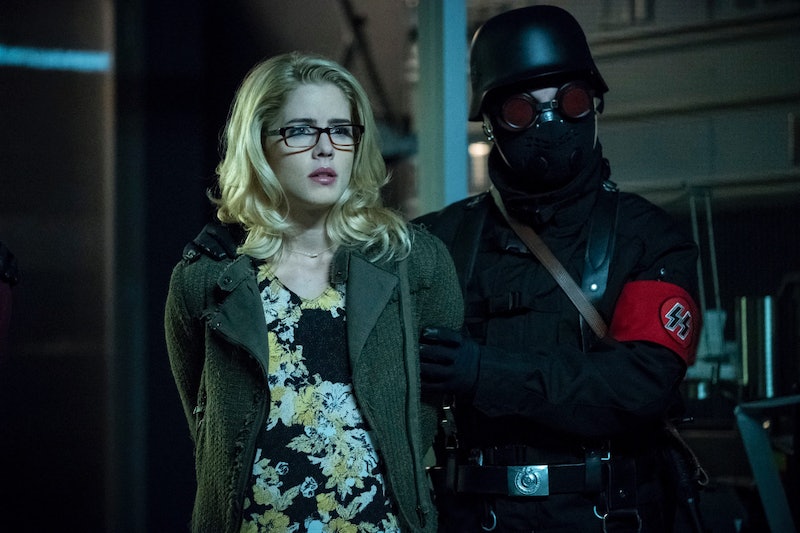 "Crisis on Earth-X" was the Arrow-Verse's most ambitious crossover event yet. The story seamlessly swept across all four shows — Supergirl, Arrow, The Flash, Legends of Tomorrow — and featured quite a few plot twists guaranteed to affect every show going forward. (Spoilers!) The crossover's only major flaw was making Nazis the main villains on "Crisis on Earth-X."

Introducing the 53rd Earth and its Man In The High Castle-type alternate universe for this event was a bold move by the showrunners, one that deserves to be applauded and criticized. But while it's great to see these superhero shows branch out into more taboo subjects and potential social commentary, the Nazi villains feel like an unearned stunt unless the Arrow-Verse is willing to commit to following through in future episodes.

On the surface, introducing Nazi versions of Oliver (the Green Arrow) and Kara (Supergirl) as villains for the four-part crossover "Crisis on Earth-X" is a brilliant move. Not only does it raise the stakes beyond any villain of the week, it's also extremely timely. Emboldened by President Trump and glossed over by modern labels such as the "alt-right" and white nationalism, Nazi sympathizers are more vocal than ever in the U.S. They marched with tiki torches and yelled Nazi slogans in Charlottesville, an event that led to the death of counter-protester Heather Heyer. They were recently profiled sympathetically in The New York Times (though there was significant backlash). And most importantly, the Oval Office is occupied by a person who seems unwilling to oppose them.

White supremacists and Nazis have a legitimacy in modern America now, something many thought would we would never see. So, for shows that usually steer clear of politics like Arrow and The Flash, choosing Nazis as villains is a strong way to take a political stance while remaining within the superhero fantasy. The crossover even directly alludes to the Trump administration's flirtation with white supremacy when Cisco (The Flash) dryly says that the Earth-X Nazis want to "make America Aryan again." However, all attempts at establishing a deeper meaning with the villains end there.

"Crisis on Earth-X" didn't just fail to truly explore the Nazi villains as they relate to modern politics, it also failed to show how the Nazi threat affected the characters themselves. The show began with the wedding of The Flash's Barry and Iris — the Arrow-Verse's only main interracial couple — getting interrupted by Nazis from another Earth. One might think that The Flash would use this opportunity as a way to discuss what might be some complications in any interracial relationship, or to hint at the difference between Iris' reaction to the Nazis as a black woman to Barry's reaction as a white man. But, no. In fact, other than their sadness at having their wedding interrupted, most members of Team Arrow seemed unaffected by the fact that literal Nazis crashed their wedding and threatened their diverse group of superhero guests. As the crossover went on, this trend of introducing a radical Nazi element and then not following through on how it impacts the characters repeated itself over and over again.

The show's decision to include Auschwitz in the crossover made the problem even more glaring. (Though the camp on Earth-X was never named, the gate shown in the crossover is identical to the infamous Auschwitz gate, marked with the words "Arbeit match frei," meaning "work sets you free".) Among the characters taken to this alternate Auschwitz were Martin Stein (Legends of Tomorrow), an established Jewish character in the Arrow-Verse, and Jefferson (Legends of Tomorrow), a young black man. But instead of allowing Stein to experience the horror of being a Jewish man from 2017 taken to an active Nazi death camp, the show dismisses the threat to his life and Jefferson's, instead focusing on the one posed to Alex (Supergirl) and Sara (Legends of Tomorrow), the two LGBT characters also being held at the camp.

Putting emphasis on the Nazis' persecution of gay people is admirable, and no doubt a good way to educate young viewers who might not know that the Holocaust expanded beyond a genocide of Jews. Nevertheless, it's a shame that the writers felt they had to choose which group might be more terrified for their lives in the face of these Earth-X Nazis. And by ignoring how Stein must have felt at being taken to Auschwitz, the show minimized the very real trauma that any Jewish person would feel when confronted by Nazis. (Incidentally, the only nod to Stein's Jewish heritage comes at the end of the crossover when his casket is adorned with a Star of David.) The same can be said for the show's other Jewish character, Felicity (Arrow), who had very little reaction to seeing Nazis. The only moment that acknowledged how the Nazis impacted her occurred late in the crossover, with a brief mention of her grandparents.

"Crisis on Earth-X" mentions Felicity's Jewish faith in one particularly chilling scene in which Oliver, pretending to be his Nazi counterpart, is asked to kill Earth-X Felicity, who is a prisoner at the camp. The same scene also features Oliver being greeted by the Nazi salute. (Another particularly disturbing image for anyone who has seen the video of alt-right Trump supporters raising their hands in the same salute chanting "Hail Trump"). Again, these details could be interesting, but they feel more like emotional manipulation because the audience never sees the emotional fallout.

It's highly unlikely that Supergirl, Arrow, Legends of Tomorrow, or The Flash will actually follow through in future episodes with any of the trauma inflicted by the Nazi villains in "Crisis on Earth-X." Fans who have watched any or all of the four shows know that, more often than not, unless dealing directly with the emotions of the main superhero or character, character development and follow through is often put aside in favor of action. Specifically with regards to love interests, the shows in the Arrow-Verse aren't particularly interested in delving deeply into the psychology of their characters (see Felicity's paralysis in Season 4 of Arrow). The shows also tend to steer clear from delving into themes of racial discrimination or ethnic identity, instead choosing to portray their diverse characters as living in a kind of color-blind utopia. Consequently, it's completely reasonable to assume that, save for a few quips, fans won't be hearing much discussion as to what it actually meant to the characters to come face to face with Nazis. In other words: the Nazi villains dangled in front of the audience as potentially character-altering figures were really just another plot device.

The greatest sin of "Crisis on Earth-X" is that it failed to acknowledge the trauma of bringing Nazis into the world of the Arrow-Verse — what it would mean for the characters and what it means for viewers watching it in 2017. The writers appear to want to introduce themes of racial injustice, discrimination, and hate, without actually acknowledging how the individual identities of the heroes in the Arrow-Verse influence their responses to these themes. This has the unintended consequence of minimizing the very real threat of racism and Nazi rhetoric at this current moment in history. It also marks a huge missed opportunity for Arrow, Supergirl, The Flash, and Legends of Tomorrow to step out of the action and into a more nuanced subject matter, and that's truly a shame.

More like this
This Episode 6 Moment Foreshadows Viserys' Fate On 'House Of The Dragon'
By Grace Wehniainen
'The Distant Echo’s Ending Mirrors 'Karen Pirie' In One Crucial Way
By Catharina Cheung
Everything To Know About 'The Last Of Us' TV Adaptation
By Sophie McEvoy and Radhika Menon
Nicola Coughlan Shared A Lady Whistledown Excerpt From ‘Bridgerton’ Season 3
By Grace Wehniainen, Alyssa Lapid and Sam Ramsden
Get Even More From Bustle — Sign Up For The Newsletter