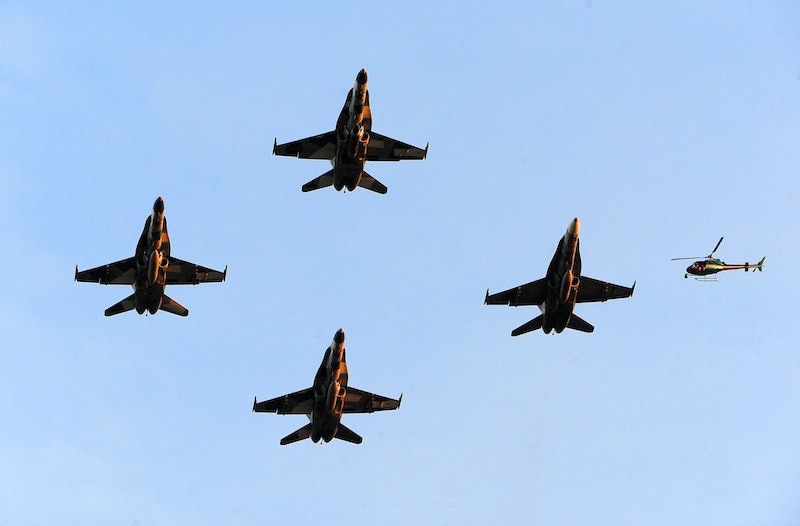 The relationship between Washington and the Kremlin has just taken a serious hit, as Russia pledged to target American-led planes in Syria. Russia issued a statement on Monday saying as much and condemning the U.S. for shooting down a Syrian aircraft, which had been dropping bombs near U.S. and coalition forces in Syria's Raqqa province.

This is the first Syrian plane that has been shot down by American-led forces, and it took place on Sunday. U.S.-led coalition troops, specifically the Syrian Democratic Forces (SDF), were fighting in Raqqa province in an effort to oust ISIS from Raqqa, which ISIS currently holds. The Pentagon claims that Syrian regime-backed planes attacked a town held by the SDF, wounding a number of soldiers. The U.S. retaliated by shooting down the Syrian government plane, showing that it is now willing to take swift military action against threats to U.S. or coalition forces.

The Syrian government, however, claimed that it was also targeting ISIS in Raqqa, and that the American attack proved that the U.S. was allied with ISIS. Russia, which backs the Syrian government, then suspended the military hotline that it has used to communicate with that and said that any American or coalition aircraft west of the Euphrates River would be treated as targets. Although the Pentagon claims that it contacted Russian forces before American-allied forces shot down the Syrian plane in an effort to make the plane stop its bombing, Russia denies receiving any communications.

If you just focus on Donald Trump's campaign rhetoric surrounding Syria, this is a surprising development. He painted himself as a candidate who could smooth over the complicated relationship that the U.S. has with Russia and avert any escalation of the war in Syria. However, this is the latest in a series of military incidents that are greatly calling those promises into question.

Russia had previously suspended the military hotline once in April, when the U.S. bombed a Syrian airbase. This time, though, Russia has also announced that it will stop coordinating with the U.S. and its allies to avoid airborne confrontations. While they have threatened that in the past, this appears to be the first time that the behind-the-scenes contacts will actually stop.

BBC News reports that this is the first time an American plane has shot down a hostile plane since the conflict in Kosovo in 1999, and it could turn out to be an important moment in the Syrian conflict. Russia and the U.S. have so far been careful not to come in direct conflict with each other, but that could change quickly if Russia keeps its pledge to treat America-backed aircraft as threats. Furthermore, as Washington continues to wade deeper into the Syrian civil war without a clear strategy, it could bring the U.S. into direct conflict with Iran.

It's impossible to say what will come of either side's statement, the American and Russian statements make it clear that both sides are increasingly willing to take more direct military action in Syria.