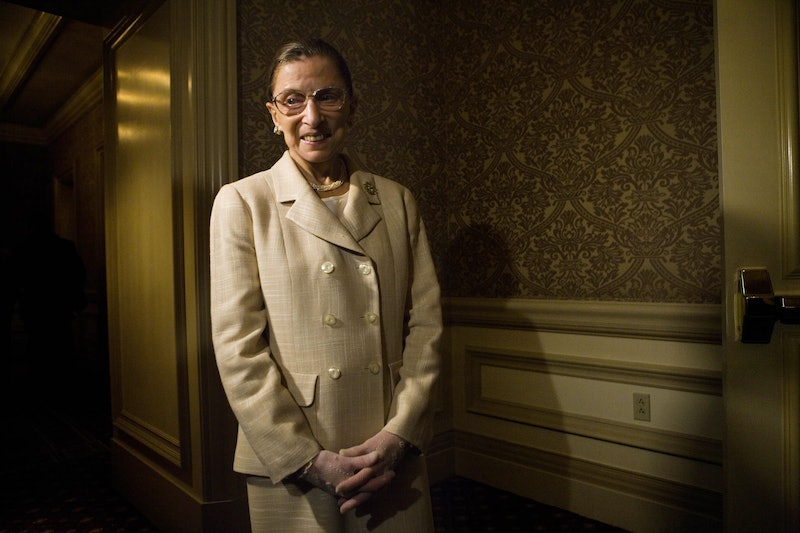 After hearing the latest news about CNN's documentary, RBG, Ruth Bader Ginsburg was reportedly thrilled while speaking with directors. The movie, which is about the justice's life, was officially nominated for Best Documentary at the Academy Awards, CNN reported. Bustle has reached out to Ginsburg's office for comment.

The directors of the film, Betsy Cohen and Julie West, told CNN that they delivered the news to the Supreme Court justice early on Tuesday. "We were excited to be the ones to give Justice Ginsburg the good news that RBG has been nominated for Best Documentary," they said.

"We reached her on the phone at her home in Washington this morning," Cohen and West added. "She congratulated us and said the nomination was 'eminently well-deserved.' She sounded strong and cheerful and said she is writing opinions and continuing to stay on top of work."

RBG, which premiered at the 2018 Sundance Film Festival, centers on Ginsburg's life beginning at her birth place: Brooklyn, New York. As the daughter of a first generation Jewish American family, Ginsburg's complex professional trajectory — from being a law professor to ultimately a Supreme Court justice — is laid out for the audience.

Both Cohen and West interviewed Ginsburg and her family members, friends, former professional colleagues, and more to create a multidimensional portrayal of one of America's most powerful justices. And it was an endeavor that took a lot of commitment from the RBG creators.

In an interview with The National Endowment For The Arts in August, 2018, Cohen got real about the effort RBG required. "Being part of a documentary is a long and fairly involved process and commitment, both for the people that are making the film and the people who are subjects of the film," she said. It took patience and strategy to make sure the film came through with its required interviews and information about Ginsburg, according to Cohen.

On top of that, Cohen noted that the creators of RBG had to make sure they had the money to make this film possible. Suffice it to say, creating RBG appears to have required a solid deal of intellectual and financial investment.

Considering that she is a justice on the United States' Supreme Court, you may think that Ginsburg doesn't have the time for checking out movies and whatnot. But while she may not have all the hours in the world to go to theaters, Ginsburg has kept an eye on recent films.

At the Sundance Film Festival, NPR correspondent Nina Totenberg asked Ginsburg to name some of the modern films she had seen, leading the latter to point out and praise Three Billboards and Call Me By Your Name. It looks like the justice, whom fans have frequently made memes of, is on top of her movie game.