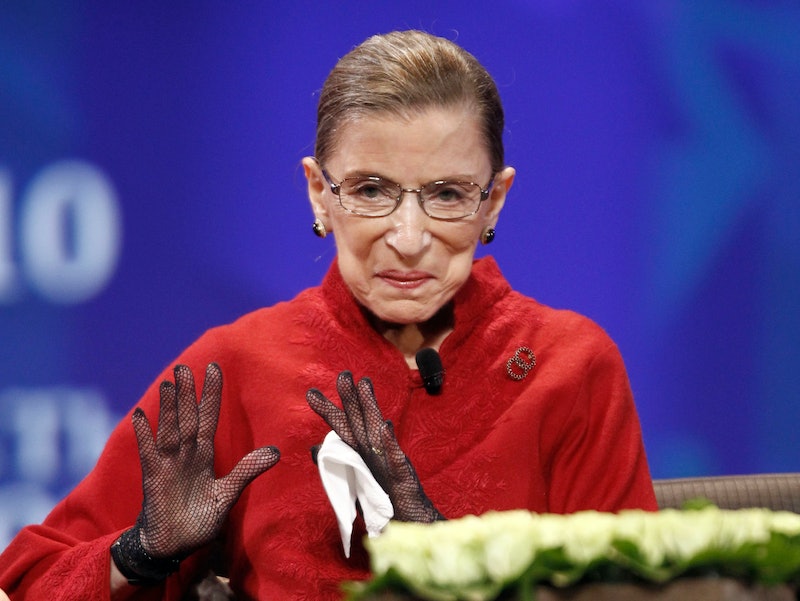 Nearly two months after undergoing an operation that removed cancerous nodules from her lung, Justice Ruth Bader Ginsburg returned to the Supreme Court on Friday. The surgery caused the justice to be absent from the bench last month and miss oral arguments for the first time ever.

A spokesperson for the court announced on Friday that Ginsburg had returned for a private conference among the justices, which CNN reports is a "regular" meeting. She hasn't been to the court since her Dec. 21 surgery and was forced to miss two weeks' worth of oral arguments last month before the court went on recess.

The court officially reconvenes on Tuesday. Since Ginsburg is back on the premises, it's very possible that she'll join the bench then, but CNN reports that the court has not yet confirmed that she will. Some leading cancer surgeons have previously guessed that Ginsburg would return for oral arguments by then, based on the typical recovery time for the operation she underwent.

Although she hasn't been physically present at the court recently, Ginsburg has been hard at work. The Associated Press reported that she was working from her hospital bed shortly after the surgery, and according to HuffPost, she's stayed on top of her briefs and cases since then.

Just before her return to the court, Ginsburg received a special get well card signed by a host of celebrities that included Lady Gaga, Steven Spielberg, Stephen Colbert, and Spike Lee. According to The Hollywood Reporter, the RBG filmmakers spearheaded the project and overnighted the card to the justice on Thursday.

"After Justice Ginsburg's surgery in December, pretty much every actor or filmmaker we met would ask us to pass on their personal good wishes to her," directors Betsy West and Julie Cohen told The Hollywood Reporter. "We know RBG is a huge movie buff — from big Hollywood epics to small indie films — so we thought she'd get a kick out of a get well card from some of the biggest names in the film world."

Last week, Ginsburg appeared in public for the first time since her surgery for a Feb. 4 performance of "Notorious RBG in Song," a series of songs performed in her honor by her daughter-in-law at the D.C. National Museum of Women in the Arts.

Ginsburg's cancer diagnosis last year came when doctors performed tests on her after she was hospitalized for fracturing three ribs in a fall. The justice previously had colorectal cancer in 1999, six years after she joined the court, as well as a bout with pancreatic cancer in 2009, per CNN. She underwent surgery both times.

The court has already indicated that Ginsburg is recuperating well from this latest operation. "Her recovery from surgery is on track," a spokeswoman announced in early January, per HuffPost. "Post-surgery evaluation indicates no evidence of remaining disease, and no further treatment is required."

Ginsburg's fans — who are quick to feel alarmed when the justice has a health scare — can take a deep breath. If not in time for Tuesday's arguments, it seems clear that the justice will be back on the bench very soon.