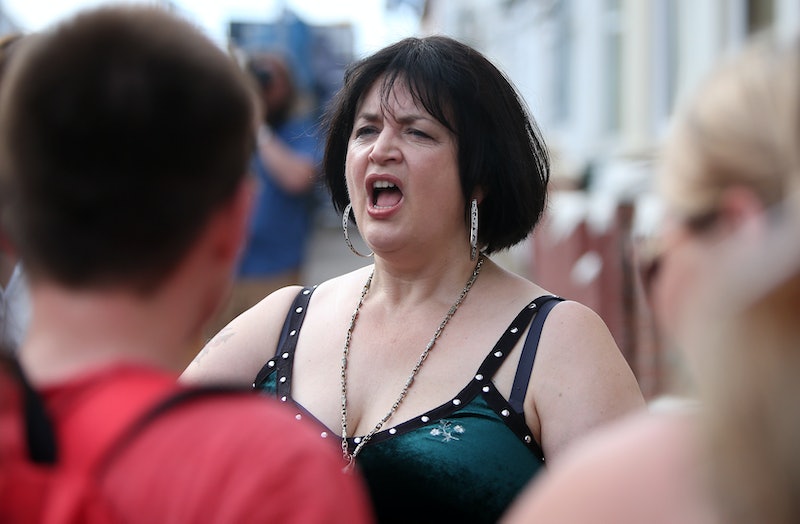 Gavin and Stacey was one of the most iconic shows of the last two decades, producing characters and lines that are quoted to this day. So it’s little surprise that when it was announced that the Barry Island and Essex gang would be getting back together for a 2019 Christmas special, fans went wild. In the words of Queen Pam herself, “Oh My Christ.” The cast and crew have caused quite a stir while filming on Barry Island and, if you needed any more convincing that this special is going to be great, then Ruth Jones shouting at fans as Nessa is sure to convince you.

From Nessa's famous “whats occurin'” to Smithy laying down the law on why he never shares an Indian takeaway, it’s impossible not to love Gavin and Stacey. And when Ruth Jones and James Cordon announced the show would be back on our screens on Christmas Day 2019, the internet absolutely lost it. The filming has drawn massive crowds on Barry Island, as LADBible reported on July 30. According to the site, while fans gathered around to try and catch a glimpse of Uncle Bryn and the gang, Ruth Jones decided to get the crowds to quieten down. And in true Nessa style, nonetheless. A fan caught the whole thing on video as Jones shouted:

"Listen, alrigh'. I'm gunna ask you a favour and I'll give you something back in return. I need you to shut up, alrigh'? While we're filming. Cause, quite frankly, you're making a lot of noise and you're ruining it for everyone. If you stay quiet during the filming, I will come out and let you have photos. If you don't, I won't. Simple as. The choice is yours. What do you wanna do?"

Wisely, no one was about to mess with Nessa and after they agreed to stay quiet she walked off and said, “crackin.” The whole interaction had the crowd and internet in fits of giggles and is such a promising snippet of what’s to come in the Gavin and Stacey Christmas special.

Matt Horn and Joanna Page will return to the show as Gavin and Stacey Shipman, respectively. The Christmas special will also mean Uncle Bryn (Rob Brydon) and Gwen (Melanie Walters) will be back in our lives. And, of course, it wouldn’t be a Gavin and Stacey reunion without Alison Steadman bursting back onto our screens as my beloved Pam, and Larry Lamb will be right alongside her as Mick.

Speaking about the reunion in an interview on ITV’s Loose Women, Lamb said: “They've not tried to turn it into a great big sort of circus or something, they've rolled it on and there you are ten years down the line. Everything you want is going to be there. Everything.”

With Nessa laying down the law and Pam running around the streets of Barry in her fluorescent pink tracksuit, it seems all with Gavin and Stacey hasn’t changed and I wouldn’t have it any other way. A decade may have passed but the cast and crew can definitely still draw a crowd and it’d seem they have as much fun off camera as they do when it’s rolling.