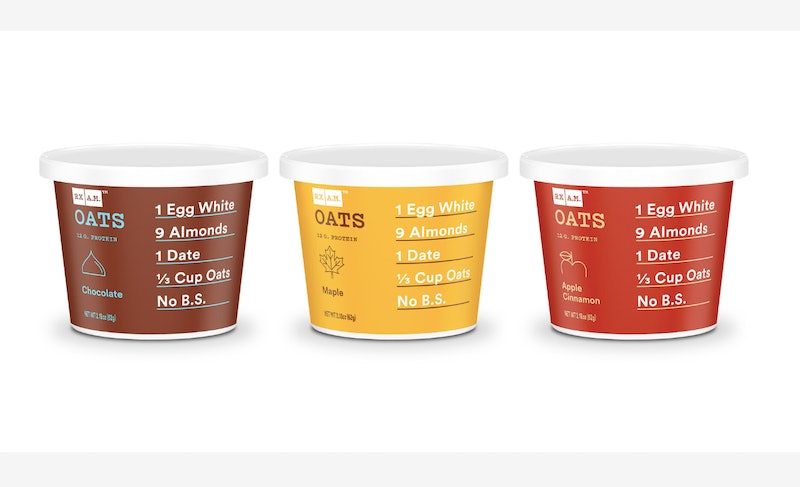 If you're a fan of RXBAR, you're familiar with its vast array of flavors, which span from Chocolate Sea Salt to Peanut Butter & Berries to Lemon. You're probably also familiar with the fact that RXBAR has leveraged its bar's notoriety into RXBAR Nut Butters, all of which I have, at some point, taken a jar of to the face. What you may not know is that RXBAR recently released RX A.M. Oats, which is essentially "RXBAR, but make it oatmeal."

The RX A.M. Oats come in three different flavors — Maple, Chocolate, and Apple Cinnamon — and are actually pretty reminiscent of what an RXBAR would be like if it were deconstructed and put into oatmeal form. Similar to the RXBAR, its main ingredients are all detailed on the outside of the package, with the RX A.M. Oats all comprised of a base of eggs whites, almonds, dates, and oats. They also have that same iconic font and color branding as the RXBARs and RXBAR Nut Butters, lest you get lost in the oatmeal aisle of your grocery store.

Bustle had the opportunity to sample all three of the new flavors just after their launch. It's important to note that they can be served up in three ways — by adding hot water, microwaving them with water, or as overnight oats — and that at least in my humble oat-eating opinion, it did make a difference not just in the consistency, but in the flavor. As the queen of all things cold leftovers, I actually enjoyed them all in overnight oat form more than I did when they were hot. The Chocolate one, in particular, was weirdly reminiscent of cookie dough, a situation that only improved itself with the addition of almond butter. That said, if you serve it hot, the chocolate will melt into the oats, which is a whole other level of deliciousness as well — it really just depends on whether you're more of an "eat the cookie" or "what cookie, it never even made it to the oven" type of dessert consumer.

The Maple was, at least to me, a good alternative to equivalent maple-flavored quick oatmeals on the market — it was sweet, but a mild kind of sweetness, without that saccharine aftertaste you sometimes get with other maple oatmeals. (I did, however, feel compelled to crush a Hershey's Chocolate Kiss into one of mine, in case you are looking for mix-in inspo.)

The one exception for me that tasted better hot than cold was the the Apple Cinnamon flavor, which is basically the food version of one of those Bath & Body Works fall candles that smells so good you want to eat it. This was a Big Autumn Mood, and if you're looking to get your cozy fall vibes on, this is an extremely low maintenance way to make it happen for yourself.

The RX A.M. Oats are available now, and can be purchased online on the RXBAR website, with the option to buy a 12-pack of each individual flavor, or a six-pack with a variety of flavors. They'll also be rolling out to grocery stories and retailers nationwide, including Publix and Costco, where you'll be able to buy them individually, so keep your eyes peeled and your oat spoons ready.