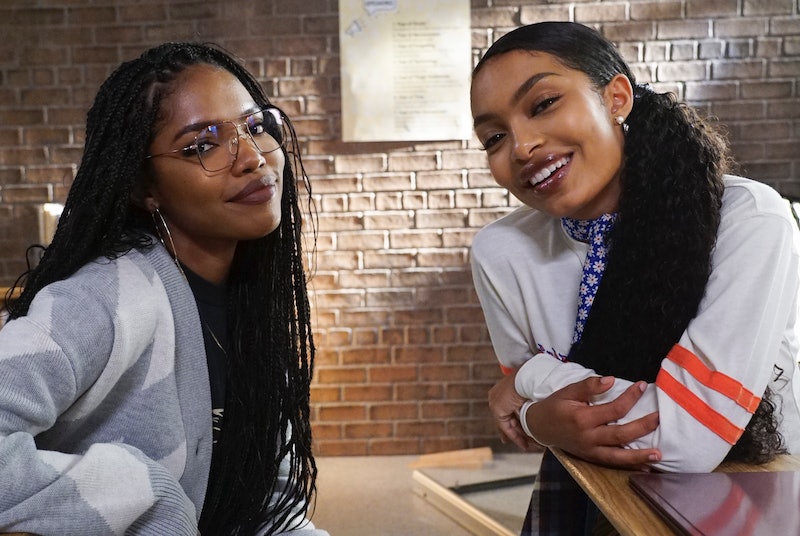 Is ish about to hit the fan? After multiple instances of their paths nearly crossing, Ryan Destiny's grown-ish character Jillian and Zoey finally came face to face in Thursday, Jan. 30's "Close Friends." But it wasn't at all the intensely awkward encounter you might have expected (though something more along those lines is assuredly coming in the near future). In fact, Jillian and Zoey hit it off and seemed like they could even kick it as really good friends.

As much as the episode pondered the complicated question of whether it's possible to be friends with an ex, Jillian will likely add another layer to Zoey's quandary: Can you also be friends with your ex's new significant other? While we don't yet know Jillian and Luca's exact relationship status, viewers did first peep Destiny's character as the mystery girl in Luca's bed — while Zoey had been just feet away — during the previous week's installment of the Freeform series.

And just because Zoey's life always has to be messy messy, the potential for her and Jillian being cool had to be further complicated by this week's cliffhanger ending when Zoey and Luca had that steamy makeout that seemed to be heading toward a full hookup.

For now, though, all Zoey (and the rest of us) know about Jillian is that she's a Spelman College student doing an exchange program at Cal U. And, as she explained to Zoey, she misses the Atlanta HBCU — like really misses it. And Charlie's "questionably racist public speaking class" she's taking with Zoey led her to assert that her transfer was probably a bad idea. (No, really, Charlie used Kanye West stealing "poor unidentified white girl" Taylor Swift's shine as something to aspire to.)

Zoey said she wished that she'd met Jillian a few weeks ago so she could have attended her HBCU-themed homecoming party. (After all, not applying to Spelman remains one of her greatest regrets, she said.) As it turns out, however, Jillian was actually there — but left Zoey and co.'s "sick house" after the cops tackled "that naked due with the braid" (aka Aaron). "Who was that guy?" Jillian asked Zoey. Her response? "I don't know. Certainly no one I've ever kissed." Oh, Zo, we don't think that's the guy she's going to be worried about you kissing...

How Jillian will shake things up this season, of course, remains to be seen. As Deadline noted in their announcement of Destiny's recurring grown-ish role in July 2019, however, they described "smart, worldly, and cultured" Jillian as having the ability to "talk art and music with Luca (Luka Sabbat), politics and activism with Aaron (Trevor Jackson), and also fits right in with Zoey (Yara Shahidi) and her eclectic crew of girls."

Given the potential for disaster once Zoey and Jillian find out they have more in common than a love for HBCUs, however, fans will have to wait and see how much of that actually holds true.