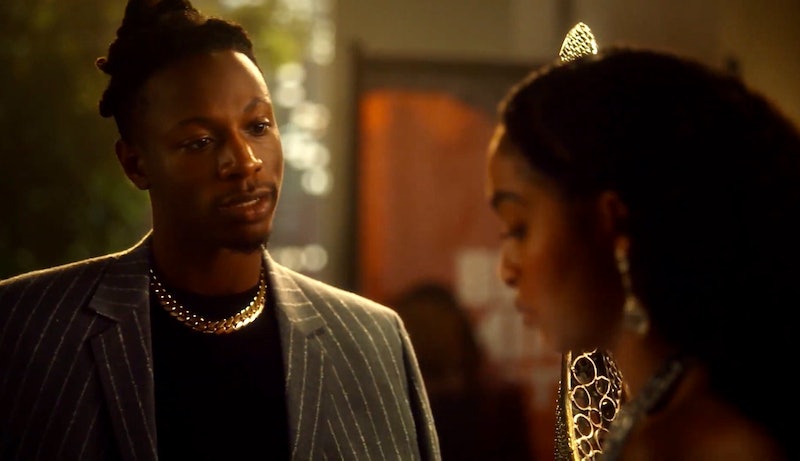 Watch out world, Zoey's grown now — or so she thinks anyway. Credit Joey Bada$$' grown-ish appearance in the Thursday, Jan. 16 Season 3 premiere titled "Crunch Time," for bringing her back to reality, however. Now back in the States after spending the summer before junior year "killing it in the UK," courtesy of a gig with the Brooklyn-born rapper's fashion brand, Zoey's forced to finally contend with her "distractions." And by distractions, she, of course, means Aaron, Luca, and "all the drama" she created before "putting an entire ocean" between them for a few months.

Now that she's leveled up to being Joey Bada$$' personal stylist, "upperclasswoman" Zoey has fallen into a false sense of having everything in order for her "pregame to adulthood." Since she astutely explains that "you never want to show up to adulthood unprepared — or sober," it's fitting that her girls, Jazz, Sky, and Ana, threw her "HBCU-style" bash a la Beychella Homecoming at their sick new house. (Where's Nomi? More on that later...) Cue a metaphorical record screech, once she admits to her friends that she "may have kissed" Aaron at the airport, and they convince her to rip off the Band-Aid and talk to him.

As it turns out, Zoey and Aaron's first communication since the Season 2 finale kiss was "so not worth the 30 minutes of stress belly" she'd endured. Perhaps chalk it up to Aaron eating Doug's marijuana-laced "booty-enhancing brownie" (complete with 'shroom icing, natch), but he brushed it off as "just a little kiss" since they "didn't even smash." (That's not to say if Zoey did still want to smash, Aaron wouldn't be down though.)

Of course, Zoey couldn't have gotten off the hook that easily. Who shows up next? You guessed it: distraction no. 2, Luca. After giving an apology (wrapped in a comedic insult about the "unsettling amount" of times Zoey has been wrong in their relationship), Luca admits that he could have better handled his jealousy over idol Joey Bada$$ offering Zoey a job instead of him. But since that's Luca's "ankh to bear," all seemed to be copacetic between the exes. That is until Luca admits that he'd chased her to the airport — throwing "your girl" into a tailspin.

Enter Joey Bada$$ who frantically texts Zoey (with symbolic black detective, black chef, and then black fireman emojis — in that order) because he needs her to pull looks for an upcoming TV gig. Since her girls were unable to help her unpack Luca's revelation, once in the studio, the rapper calls her out for turning his turtlenecks into her dudes. And he turns out to be exactly the objective voice of reason Zoey needs.

"I'm talking about you second-guessing yourself and projecting your doubts about your dude onto my very clear vision of looking like a Black Steve Jobs on television," he tells her, commenting on the loss of focus she had exhibited abroad. "Word to the wise: Don't distract yourself out of a job, Zo. Don't let that stuff cloud what you know is right. You've got killer instincts. Just go for it."

After he drops that knowledge, Zoey comes to the realization that, even if Luca had caught her in time, nothing would've stopped her from taking the summer job in London. Rejoining her welcome home party, she tells Ana that all of the Zuca and Zaaron drama is "so last year" and that she's ready to "get started on this one."

So as Zoey danced her way into junior year, she promised to stay focused on the pregame to adulthood and deal with the rest as it came. But as Nomi finally arrives to the party — sporting a prominent baby bump — it becomes clear that she's the grown-ish character who's pregnant. "As it turned out, some of us skipped the pregame and went right into the party," Zoey says of the unexpected reveal.

While viewers will have to wait to get all the tea on Nomi's apparent pregnancy, here's hoping there's much more of Joey Bada$$' low-key comedy (see the hilarious episode-ending scene where his turtleneck gives him some major issues). If nothing else, it seems he'll be exactly the voice of reason to help Zoey finally grow up in Season 3.

More like this
Twitter Is Freaking Out Over Rihanna’s 2023 Super Bowl Halftime Show Announcement
By Stephanie Topacio Long
'Rap Sh!t' Season 2 Is Officially Happening & Will Include "More Seducing & Scheming"
By Brad Witter and Grace Wehniainen
'School Of Rock' Changed Joe Keery's Life Forever
By Alyssa Lapid
Devi Is Going To Meet A “Smoldering Bad Boy” In ‘Never Have I Ever’ Season 4
By Jack Irvin and Gabrielle Bondi
Get Even More From Bustle — Sign Up For The Newsletter