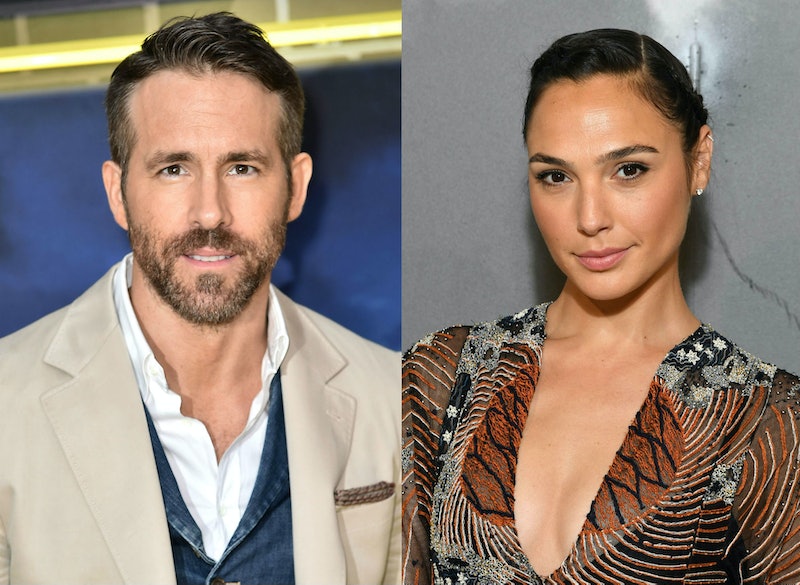 The popular streaming service just got even bigger. Gal Gadot and Ryan Reynolds are starring in a Netflix movie with Dwayne "The Rock" Johnson. Deadline reported the major news on Tuesday. The project titled Red Notice is described as an international heist feature film and will begin production in January 2020.

According to Deadline, the action-thriller is "centered around the pursuit of the most wanted art thief in the world" and "takes place in multiple countries." Red Notice was initially acquired by Universal Pictures in 2018 (Netflix was runner-up in the bidding process) and only Gadot and Johnson were attached to the movie. Reynolds' casting was announced at the time of Deadline's report on July 8. According to the outlet, Netflix acquiring Red Notice is "arguably its biggest commitment to a feature film."

The film will be the first major Netflix project for both Gadot and Johnson. As for Reynolds, he's starring in Netflix's 6 Underground directed by Michael Bay and due for release sometime in 2019. Johnson seems excited for the streaming service project. Next to an announcement about Red Notice, Johnson wrote on Instagram,

"The world is officially on NOTICE. Myself and my co-star partners-in-heist @gal_gadot & @vancityreynolds invite you to join us for the @netflix global event movie known as RED NOTICE. They’re the greatest and most sophisticated art thieves the world has even known and have all the answers. Until I change the questions - because I’m really good at my job too. 190+ countries and growing will all join us to witness at the same time."

Based on Johnson's Instagram caption, it appears Reynolds and Gadot will play art thieves. In June 2018, Deadline described the movie as a "globe-trotting, action-comedy, heist thriller designed as a three-hander between Johnson, Gadot and another male star who’ll soon be set." Gadot's Red Notice character was also said to be a "brilliant and mysterious figure in the art world." As for that other unknown male star, well, that appears to be Reynolds. IMDb describes Red Notice as follows: "An Interpol agent tracks the world's most wanted art thief."

Johnson couldn't be more ready to work with Netflix, Gadot, and Reynolds. "I admire the ambition of Netflix to become one of the biggest movie studios in the world," Johnson said in a statement (via Deadline). "Their original content generates critical acclaim and invites full collaboration on every level of production."

Red Notice is directed and written by Rawson Marshall Thurber (Easy A, Skyscraper). Deadline also reported that the film has "committed to arguably its biggest star-package feature film to date, with a production budget in the $130 million range, this for a project the company believes will deliver a new franchise with global appeal."

Gadot, Reynolds, and Johnson definitely make a great trio, who will certainly do an action-thriller-comedy about art thieves justice. Between Reynolds playing Marvel superhero Deadpool, Gadot making a name for herself as Wonder Woman, and basically every action movie The Rock has ever starred in, these three are perfect for what sounds like the next big blockbuster — and this time on Netflix.

More like this
Here’s Everything Coming To & Leaving Netflix In February
By Jake Viswanath
Here's How Netflix Should Adapt Prince Harry's Memoir Into A Movie
By Ginny Hogan
Twitter Is Mad At The Razzie Awards For Nominating A Child For Worst Actress
By Radhika Menon
Alicia Silverstone Revives Her 'Clueless' Character In This Super Bowl Commercial
By Jake Viswanath
Get Even More From Bustle — Sign Up For The Newsletter
From hair trends to relationship advice, our daily newsletter has everything you need to sound like a person who’s on TikTok, even if you aren’t.