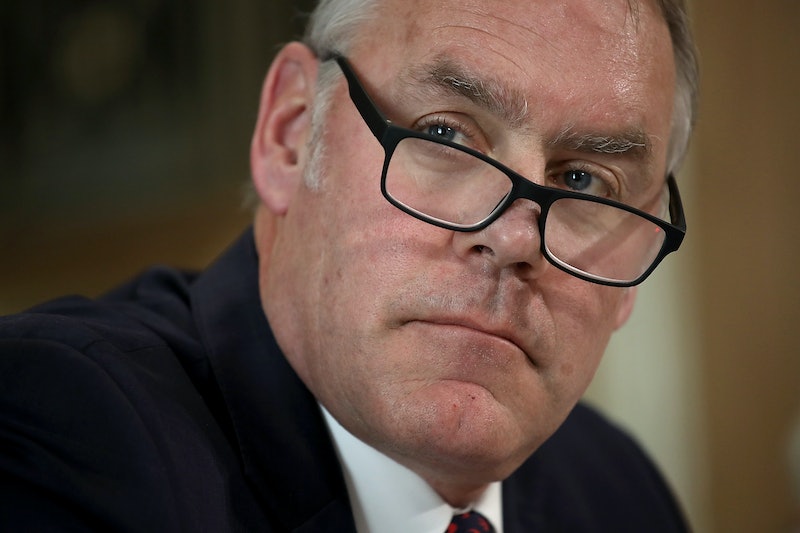 In response to the anti-diversity sentiment allegations leveled against Zinke, the Interior Department's spokeswoman, Heather Swift, said that the remarks were baseless and told CNN, "As a woman who has worked for him for a number of years in senior positions, I say without a doubt this claim is untrue, and I am hopeful that they are a result of a misunderstanding and not a deliberate mistruth."

CNN cited an Office of Personnel Management estimation that says the Interior Department employs a cohort of at least 68,000 employees. At least 70 percent of that employee body is white.

The anonymous sources told CNN that Zinke had reportedly said that "diversity isn't important" for the department along with comments like "I don't care about diversity" or "I don't really think that's important anymore." In place of diversity Zinke would, according to the sources, say that "what's important is having the right person for the right job." The insiders claim that Zinke said he prioritized "excellence" and added, "I'm going to get the best people, and you'll find we have the most diverse group anyone's ever had."

According to one of the staffers that spoke with CNN, Zinke had reportedly made his thoughts on diversity as soon as he was confirmed as Interior Secretary in March 2017. The staffer said that Zinke pushed against diversity in a meet-and-greet gathering at the time when he was asked about hiring people with diverse backgrounds to his department. The staffer told CNN, "[Zinke] flat out said, 'I don't really think that's important anymore. We don't need to focus on that anymore.' He obviously needed someone to provide him with better talking points."

But Swift, who spoke on behalf of the department, said that not only does Zinke appoint women to the department, he also was apparently aware of racial diversity for the ministry. "Zinke has filled several other senior positions at the career and appointed level with individuals from diverse backgrounds," Swift told CNN.

Still, insiders tell CNN that Zinke's alleged comments have sent a clear message against diversity. One source, who CNN says is a minority, told the news outlet that he had heard similar anti-diversity comments from Zinke before. "That told me everything I needed to know," the anonymous source said. "It's a hard business as it is, and then not to be respected or appreciated for the diverse perspective that you bring to the situation—and that's why it's important in my opinion."

The person went on to say, "It's the fact that we don't look at things the same way. When we have conversations about public lands and how they're used, we cannot afford to have a small percentage of people making those decisions."

The report about Zinke arrives after he reassigned 33 senior staffers in June 2017, causing criticism among some about the department's sudden shake-pu. In fact, some reassignments have been legally challenged by former employees, such as the previous director of Interior Department's Office of Policy Analysis Joel Clement.

Last year, Clement said he had been reassigned from his position due to his research on climate change but a spokesperson for the department told The Hill that the reassignments were to "better serve the taxpayer and the Department's operations through matching Senior Executive skill sets with mission and operational requirements."