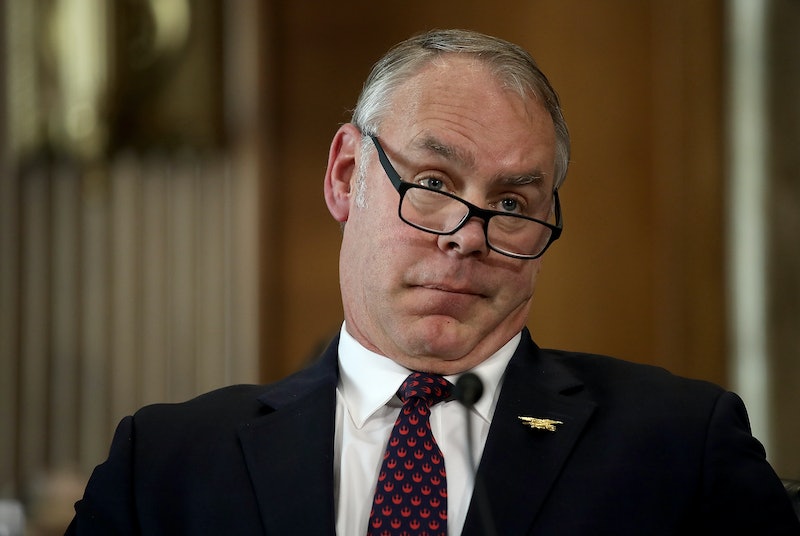 Here's the deal: On June 1, Department of the Interior (DOI) Secretary Ryan Zinke announced on Twitter that a mother duck had taken up residence just outside the Interior headquarters in Washington. The duck — technically, a mallard — was quickly dubbed #DOIDuck. Now, a little over a month later, Zinke reported the "bittersweet news" that the DOI Duck lost eight of her nine eggs to scavenging rats, causing some to question his usage of the word "bittersweet".

"We have bittersweet news about the #DOIDuck," Zinke tweeted. "Last week, 8 of the 9 eggs were eaten by rats. Mama duck abandoned her nest shortly after that."

During the month, #DOIDuck resided outside Interior headquarters. Various bird lovers posted updates on Twitter, showing her squatting over her nest surrounded by plastic water dishes and torn pieces of bread left for her by passersby. In his initial June 1 post, Zinke's showed a photo of an aide pouring water for the duck. On June 21, a laminated sign appeared by #DOIDuck's nest warning against feeding her, because, according to the sign, most mallards don't eat while incubating eggs.

People periodically asked for #DOIDuck updates on Twitter until finally it was revealed on Monday morning that most of the eggs were gone, as was #DOIDuck. He called it "bittersweet."

Later that morning, Zinke possibly revealed what he meant by bittersweet with a photo of a single fluffy duckling, and the caption, "This morning we found a single duckling. Experts at @USFWS say Mama won’t come back because she left before #DOIduckling hatched. FWS says duckling won’t survive on its own, so a wonderful @interior employee is taking #DOIDuckling home to grow up in his backyard pond," complete with baby bird and heart emoji.

Regardless, people were pretty confused about the story, particularly Zinke's thinking that most of the mother duck's eggs being eaten by rats wasn't all bad. Here are just a few of the Twitter reactions:

All Bitter, No Sweet

Even with the one surviving duckling, some found it a stretch to call the situation "bittersweet."

This Twitter user took the opportunity to draw parallels to the ongoing issues surrounding the administration's child separation policy.

It can sometimes be hard to see the upside of a mother duck losing most of her eggs and leaving the one remaining to fend for itself.

Whether this Twitter user is referring to National Parks Policy as being "eaten by rats" or "abandoned" is unclear, but it's probably safe to say they're critical of Secretary Zinke's role in rolling back parks protections.

This user called out the Secretary on a Twitter faux pas — not continuing his "bittersweet" story in a thread, and thus leaving followers confused.

Zinke's #DOIDuck saga has come to an end, but of course not without a fair number of Twitter opinions and mocking wordplay. Hopefully #DOIDuckling fares better.