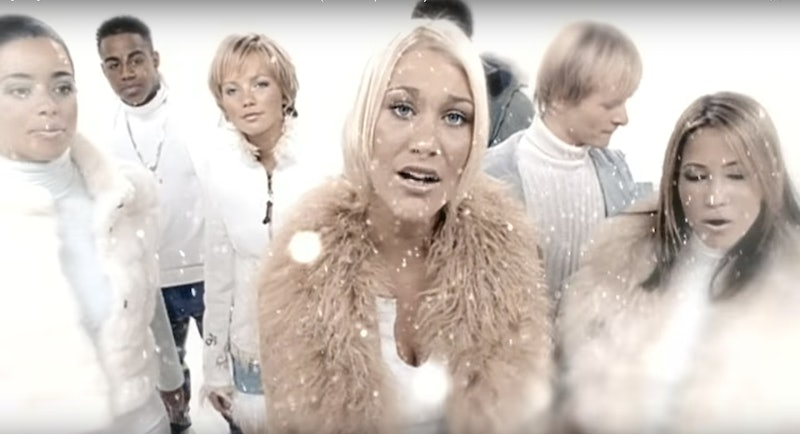 As any good '90s kid knows, there ain't no party like an S Club party. From the club hits to the TV series, they showed the world how to get down in the best, most over-the-top '90s way. Well. S Club 7 is making a comeback as S Club 3, and while it might not be the perfect lineup, it's still enough to make a dream come true. Forced puns aside, the band now called "SC3" is breaking off from the original S Club 7 group, releasing new music, and even planning a tour, according to The Sun. So, there will absolutely be new music from your S Club faves before the end of 2017. Sounds like the holidays are coming early this year.

The SC3 trio is comprised of band members Jo O’Meara, Tina Barrett, and Bradley McIntosh. Per The Sun, on Dec. 8, they'll release the track "Family," which will be an S Club affiliate's first new single in 14 years. Somehow, that sounds like a really long amount of time, but also, not that long? Remember, they had a hit in 2003. Fans are hopeful that the new band will be true to everything people loved about them the first time around. Namely: metallic outfits, over-the-top accessories, and catchy hooks for days. Also, those incredible accents.

Four members of S Club 7 declined to reunite, reportedly after band member Paul Cattermole resisted the idea of recording new music. According to The Sun, his departure reportedly split the group in half; three were ready to continue as a band, but Rachel Stevens, Hannah Spearritt, and Jon Lee sided with Paul. But if seems unlikely that the group would have bad blood. After all, they performed in a sold-out tour as recently as 2015, and that was in the original lineup, and playing the songs that everyone knew. (As in, they had not recorded any new material for the tour.) Plus, though a few have split off from the S Club 7 crew '90s kids grew up with, at least they're going under a separate name. It's not like they're holding auditions to fill in four missing roles. That would be weird. Instead, SC3 is happening. Honestly, that's pretty cool too.

S Club 7 are almost like an artifact from the late '90s and early '00s: a sprawling pop group, seemingly manufactured in a lab to appeal to the widest possible demographic. Unlike Backstreet Boys or the Spice Girls, S Club 7 had men and women. Seven adults in a pop band was uncommon, and their success was unprecedented; kids everywhere tuned in on Saturday mornings for a scripted musical series starring the band as themselves. They were attractive and quirky and funny and stylish, and their chemistry was believable. Plus, the music rocked. It rocked. Every single track.

Fans of S Club 7 who are hesitant about SC3 should not worry. The band isn't broken up for good. Just not all of them wanted to continue doing the thing they've been doing on and off, together, for almost two straight decades. That's understandable. And now, the ones who do want to get into something new — Jo, Tina, and Bradley — they get to start a new fire pop group for a whole new generation to discover.

Fair warning: Some more puns are about to happen now. '90s kids never had a dream come true until the day that SC3 announced their new single. The English trio reached for the stars, and now they're gonna climb every mountain higher. Since there ain't no party like an S Club party, S Club 3 are ready to bring it all back to their fans. Coordinating, stretchy outfits not included.