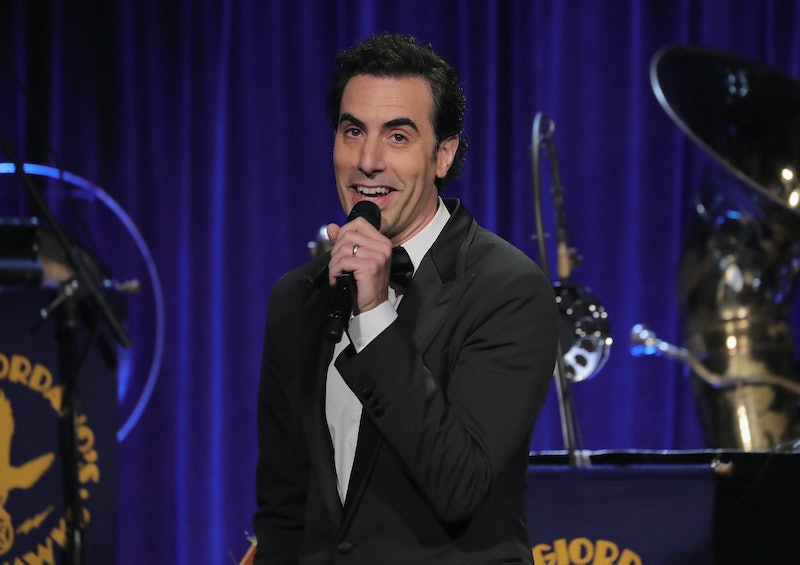 Talk about method acting. On Thursday, Sacha Baron Cohen responded to Sarah Palin's complaint by writing her a letter that was fully written from the perspective of the character that she believed to have been "duped" by in the first place. The character, named Billy Wayne Ruddick Jr., PhD, tweeted at Palin with a letter attached to the tweet, as well as the hashtags #MAGA, #buildthewall, and #boycottsashacohen.

The letter was in response to Palin's outcry that she had been "duped" by Cohen into appearing on his new TV series, "Who Is America?," which debuts on Sunday. Palin said in a Facebook post that she was told she would be appearing on a "legit Showtime historical documentary," and instead was interviewed by Cohen disguised as a disabled veteran.

"The disrespect of our US military and middle-class Americans via Cohen’s foreign commentaries under the guise of interview questions was perverse," Palin said, before challenging Cohen, CBS, and Showtime to donate all of the proceeds of the show to a charitable group that benefits veterans.

Cohen may not have responded, but Ruddick Jr. did. In a tweet at Palin, Ruddick Jr. wrote, "Vice-President Palin, I am Dr. Billy Wayne Ruddick, founder/CEO/accountant of Truthbrary.org and it was I that interviewed you."

Ruddick Jr. continued, "I did NOT say I was a War Vet. I was in the service- not military, but United Parcel, and I only fought for my country once- when I shot a Mexican who came onto my property."

After informing Palin that he, like the president, was "prevented from joining the regular army", Ruddick Jr. said, "I have always admired you for TELLING THE TRUTH about Obama's birth certificate and the location of Russia. But ma'am, I do believe you have been hit by a bullsh*t grenade and are now bleedin' FAKE NEWS."

Ruddick Jr. concluded the letter by demanding an apology from Palin. He said, "You used to hunt the most dangerous animals in the country, like wolves and people on welfare. So why hunt a fine citizen journalist like myself?"

But Palin isn't the only person Cohen supposedly "duped." Former Alabama Senate candidate Roy Moore also claims Cohen tricked him by offering him a free trip to D.C. to receive a reward for supporting Israel. Like Palin, Moore was not pleased when he learned he learned it was actually Cohen offering the trip. Moore's statement reads,

I don’t need Sacha Cohen to tell me who America is, but I can tell him that America is a proud Nation which sprang from humble beginnings and a strong belief in God, virtue, and morality.

As an American, I would never hide my identity and deceive others only to mock and ridicule them as this Showtime Series is designed to do. America is not only about being proud but about being brave and standing for what we believe.

I am involved in several court cases presently to defend my honor and character against vicious false political attacks by liberals like Cohen. If Showtime airs a defamatory attack on my character, I may very well be involved in another. As for Mr. Cohen, whose art is trickery, deception, and dishonesty, Alabama does not respect cowards who exhibit such traits! It’s been a long time since I fought for my country in Vietnam. I’m ready to defend her again!

In other words, Moore is threatening to sue if Cohen airs the footage of him on Sunday. If anything, all of the fuss over Cohen's trickery is certainly drawing attention towards the show's premier. Whether or not Cohen will dare to show footage of Palin or Moore on national television remains to be seen.