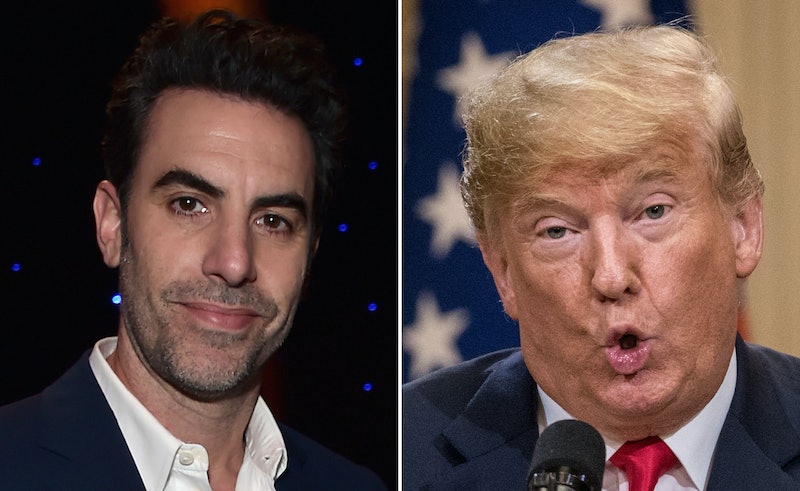 Sacha Baron Cohen has done a lot of silly stuff in the name of entertainment. But while his roles in Borat, Brüno, and Grimsby were mainly played for laughs, his next project, Who is America?, is set to take on a host of US political heavyweights, including the president of the Unites States, Donald Trump. Sounds epic, right? Well, here's a breakdown of what Sacha Baron Cohen's new TV show is all about.

The British star's first solo project since his 2016 film Grimsby, was announced when US broadcaster Showtime posted several videos to its YouTube channel, revealing the comedian had been filming a new series undercover for a year. It was then confirmed that the show was called Who Is America?, a seven-part series that Showtime reckons is "perhaps the most dangerous show in the history of television". Intriguing, huh?

But what can be expected from Who Is America? as the series unfolds? According to the Guardian, the show will "explore the diverse individuals, from the infamous to the unknown across the political and cultural spectrum, who populate the unique nation" of the US.

Right... So, which American politicians were duped into being interviewed by an undercover Cohen for the show? It turns out, quite a few.

The appearance of George W. Bush's vice president Dick Cheney was confirmed in the promotional clips posted. In the footage, he can be seen signing a waterboard for Cohen, while commenting "that's the first time I've ever signed a waterboard".

Seriously, how did he not realise something a little dodgy was going on, here?

Rightwing political commentator Matt Drudge revealed there were more names where that came from too. According to Vanity Fair, he tweeted: "Both Republicans and Democrats are getting caught up in the madness." He then went on to claim that the likes of Sarah Palin, Howard Dean, Bernie Sanders, and Ted Koppel were all fooled by Cohen and agreed to be interviewed by him.

Well, Drudge certainly seems to have been right about at least one of those names.

Indeed, it's now very likely that the former Governor of Alaska, Sarah Palin, will make an appearance on Who Is America?, as she revealed in an irate Facebook post she had been "duped" into being interviewed for the show by someone she now believes to be Cohen. She went on to allege that he had "heavily disguised himself as a disabled US veteran, fake wheelchair and all."

However, Showtime denied these allegations, reports CNN. In a statement, the network said: "There has been widespread misinformation over the past week about the character of Billy Wayne Ruddick Jr., Ph.D., performed by Sacha Baron Cohen on the Showtime comedy series 'Who Is America?' Baron Cohen did not present himself as a disabled veteran, and viewers nationwide who watched the premiere on Sunday can now attest to that." Palin responded to the statement on Twitter, calling it "more BS."

Cohen himself also responded to the allegations in a letter signed off my his on-screen alter ego, Dr. Billy Wayne Ruddick. He wrote: "I did not say I was a War Vet. I was in the service - not military, but United Parcel."

Of course, Palin isn't the only one that supposedly fell for Cohen's characters. It's believed the comedian also set out to come after Trump on some level too. Indeed, all the Who Is America? promotional clips posted to Cohen's personal Twitter account have included references and mentions of Trump, with Cohen's Twitter bio being accredited as a Donald Trump quote. It reads: "They should have pummelled him (Baron Cohen) to the ground. It would have been great."

The pair actually have history together, as Cohen previously interviewed Trump as Ali G back in 2003 — something they have both since disagreed about since. Trump has claimed that he immediately walked out of the interview, however, Cohen told The Late Late Show that Trump had actually stuck around "for several minutes."

So, has Baron Cohen bested Trump again on Who Is America? Well, that remains to be seen, but viewers can be pretty confident Trump won't escape entirely unscathed, whether he makes an appearance on the show or not.

Who Is America? premiered on Showtime in the US on Sunday. The first episode of the series then aired on Channel 4 in the UK on Monday. If you missed it, you can catch up with 4 On Demand by clicking here.

Who Is America? returns to Channel 4 on Monday at 10 p.m.