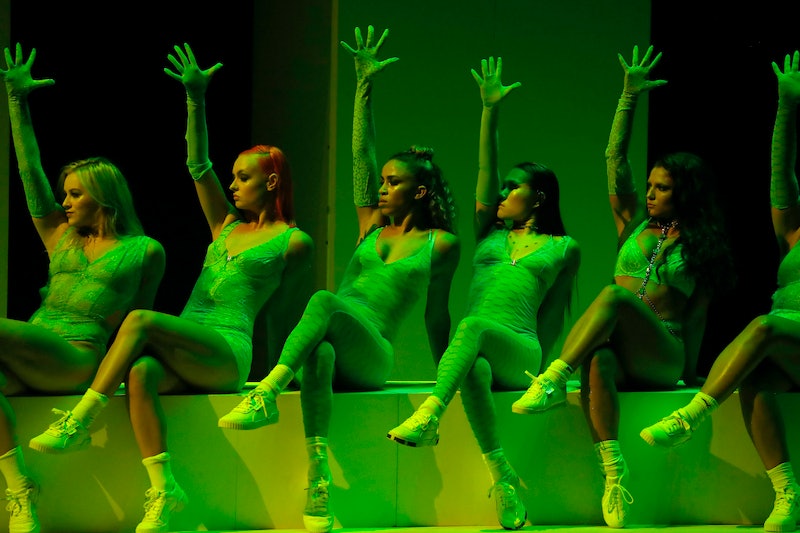 If you think you know what "sexy" is, Rihanna wants to have a talk. The superstar's Savage X Fenty 2019 Fashion Show was created to redefine the term, starting with a cast of extremely diverse models. While these models wore plenty of traditionally "sexy" pieces like lace panties and strappy bras to hit the runway, many also wore an unexpected accessory: single, sheer, opera-length gloves.

Yes, Rihanna thinks "sexy" is a single opera-length glove. And who are you to say no?

The unpredictable accessory blends iconic single-gloved Michael Jackson style with classic Audrey Hepburn Breakfast At Tiffany's sensibility. Toss in some sheer panty-like material to that mix, and you have Rihanna's twist on elbow-skimming gloves. After seeing the look, you may be inspired to take her styling points straight to the bedroom.

While some celebrities, like Laverne Cox, wore two elbow-reaching gloves during the show, others, like Cara Delevingne, rocked a single glove look. The asymmetry of the accessory was definitely eye-catching, making the already standout Savage X Fenty styles even more unique.

The single-gloved look seems to have been isolated to models and dancers wearing lime green in the show. Others in similar ensembles wearing black, red, and white wore two gloves.

On the red carpet before the event, model Slick Woods wore a single glove as part of her lime green look. However, once on the runway, the model wore two gloves to match a deep purple outfit.

Rihanna didn't discuss the style decision in the documentary film of her NYFW show, which premiered on Amazon on Sept. 20. She did however say her goal for the show was to challenge and redefine what society views as sexy.

"I’m looking for unique characteristics and people that aren’t usually highlighted in the world of fashion as it pertains to lingerie and 'sexy' — what society sees as sexy,” Rihanna said of the casting for the show.

But there is bad news for fans who want to steal the unique runway style. No gloves are currently featured on the Savage X website for purchase or pre-order, though all the looks from the show are up for sale. In fact, pairs of opera length gloves were also featured in Savage X Fenty's 2018 runway show, but were never made available for sale. When one customer asked the brand for the accessory on Twitter back in Sept. 2018, Savage X responded, "The gloves are exclusively for the fashion show, and it's [sic] not for sale."

The gloves from this year's show, however, are also featured prominently in the Savage X Fenty's current site imagery. Customers can hold out hope that Rihanna will release them at a later date — especially given customer demand on social media.

In the meantime, your local Halloween store may have the hookup for opera length gloves in several different shades. Whether you wear one or two when channeling your sexiest self is up to you. Just know Rihanna approves either way.