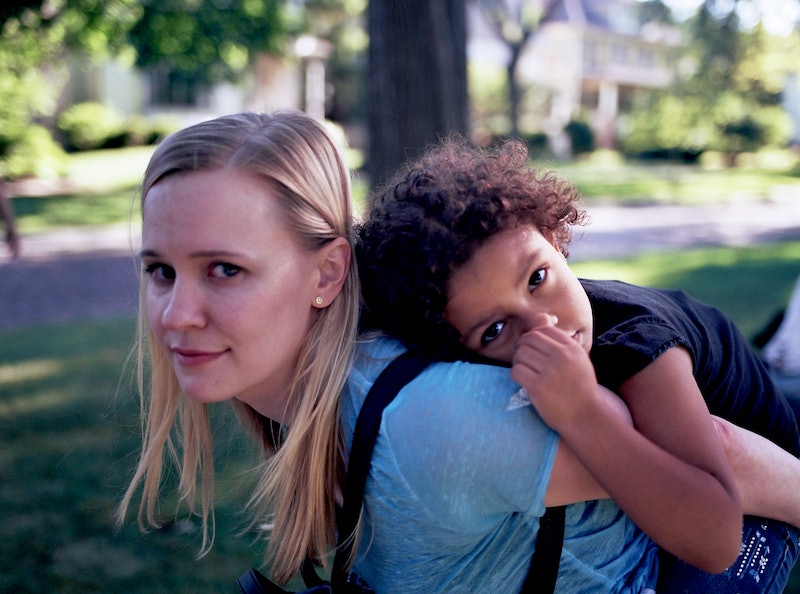 For a long time, the inner workings of women's bodies have been considered taboo. From what actually happens when you get your period, to the impact an abortion has on your body, there are a number of topics women often keep hush hush. But thanks to efforts like the Shout Your Abortion campaign or Period: The Menstrual Movement, women all over are learning not to be ashamed of their body's functions. And at the movies, a comedy called Saint Frances, opening Feb. 28, celebrates women's bodies by normalizing abortion, periods, postpartum depression and all of the things that women have been socialized into considering shameful.

Written by and starring Kelly O'Sullivan, Saint Frances follows 34-year-old Bridget, a woman who doesn't quite have her life figured out. Faced with an unwanted pregnancy, she has an abortion. Soon after, she takes a job as a nanny to a little girl named Frances, whose parents, Maya and Annie, are an interracial lesbian couple. Maya, has just given birth to their second baby, and is suffering from postpartum depression.

As Bridget slowly becomes a part of their family, the intricacies of women's lives and their bodies are exposed in a way that feels familiar yet so little talked about. Bridget continues to bleed irregularly for months after ending her pregnancy, a detail often left out of abortion narratives. She leaves spots on chairs and walks around with a constant feminine hygiene supply. One potential love interest gets angry at the drops of blood left on his bed while another doesn't mind it at all, a striking difference in male reactions to vaginal bleeding. At the same time, Maya continuously grapples with her postpartum depression and the toll it takes on her mental state. Colicky and clingy, her new baby wails almost constantly, leaving Maya nearly catatonic.

The whole film plays like love letter to the power of women's bodies. O'Sullivan's script touches on subjects that feel talked about only between bathroom stalls or in whispered secrets between women. Here, however, nothing from periods to abortion to childbirth, is off limits, nor should any of them be anymore.

In an official statement about the movie, O'Sullivan wrote that, "Women and girls are encouraged, outrightly or subliminally, to keep abortion, postpartum depression, periods, or any other innate part of womanhood that's considered messy, 'gross,' or shameful to ourselves. That makes for lonely, confusing, and isolating experiences."

In making these hushed topics open for discussion, Saint Frances argues that abortion doesn't have to be everything but it doesn't have to be nothing, either. Bridget tries hard to bury her feelings about ending the pregnancy, but they bubble up eventually anyway. When she finally tells Maya and Annie, she bursts into tears that she didn't even know were there. Together, Maya and Annie help Bridget strip away any remaining shame, and truly begin to move on and heal.

Its in these moments, O'Sullivan's mission statement for the movie rings loud and true. "[The film] endeavors to normalize and de-stigmatize those parts of womanhood that we're encouraged not to talk about...abortion doesn't always have to equal trauma, periods shouldn't equal shame, and postpartum depression shouldn't equal isolation," O'Sullivan says. And boy does it ever.