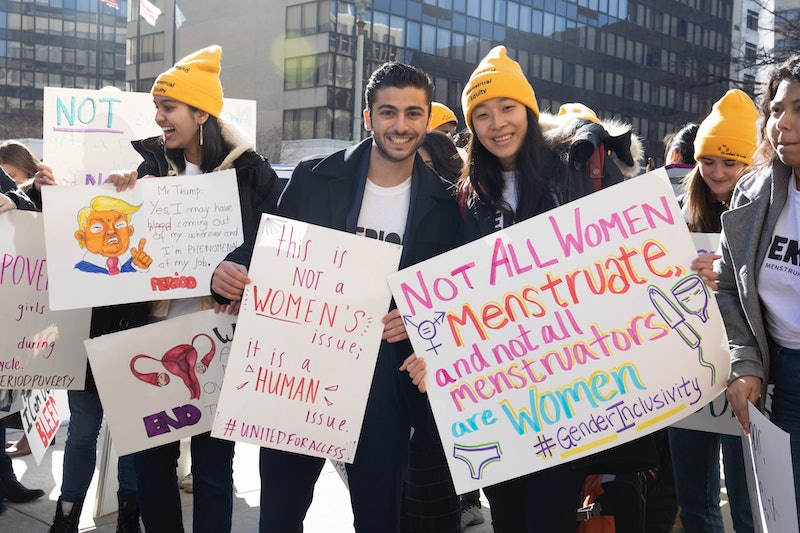 Nadya Okamoto is the founder and executive director of PERIOD, an organization she founded at the age of 16. PERIOD is now the largest youth-run NGO in women’s health, and one of the fastest growing ones in the United States. In this op-ed for Bustle, she shares what she wants everyone to know ahead of the first-ever National Period Day on October 19.

Breaking the period stigma and addressing period poverty is not just a “women’s issue,” this is a human issue, that affects all of us — not only because menstruation makes human life possible in the first place (it does), but because right now, the culture around menstruation and a lack of access to period care act as significant barriers to menstruators discovering and reaching their full potential. So, we ALL need to talk about periods — especially if we as a society are going to be serious about fighting for progress towards gender equality, global development, and breaking the cycle of poverty. It is also important to make this a human issue that concerns all of us, in an effort to be gender inclusive — because not all women menstruate, and not all menstruators are women. Some menstruators may identify as transgender or nonbinary but still experience their periods.

When we look at how gender equality is defined, the qualifiers really fall into four major buckets: 1) education; 2) economic mobility; 3) access to health care; and 4) equal representation in politics and decision-making. Periods are currently one of the main reasons why girls miss school in developing countries. In many countries, a girl’s first period is the single event that leads to dropping out of school, getting married early, being forced into social isolation, and even undergoing female genital mutilation. This is not just an issue in developing countries, either. In the U.S., more than 4 in 5 students (84%) have either missed class or know someone who has because of a lack of access to period products, according to a 2019 survey of 1,000 teens ages 13 to 19, commissioned by PERIOD and Thinx and drawn by Harris Insights & Analytics.

A recent study published in Obstetrics & Gynecology of 183 low-income women in St. Louis found that almost two-thirds (64%) couldn't afford period products in the last year — and according to the 2018 Always Confidence & Puberty Survey, one in 5 girls miss school because of a lack of access to period care. Period products are almost never free or accessible for students, even though they should be treated just like toilet paper and provided in all restrooms. I mean, if you went into a bathroom and then realized there was no toilet paper…you’d be pissed! Periods are just as natural — and menstruators are very familiar with the experience of unexpectedly bleeding in public, at school, or at work.

Over half of our global population menstruates for an average of 40 years of their life on a monthly basis. Yet, research and medicine for women’s and reproductive health is SO far behind in comparison with men’s health. It wasn’t until 1993 that the National Institute of Health even included women in clinical trials — until then, women were basically considered smaller versions of men, despite the fact that their bodies function ways that are fundamentally different from men, especially on a hormonal level. So, no wonder we are still fighting for research and treatments for conditions like endometriosis, which affects around 10% of women in the U.S. and causes extremely painful periods. This condition is hard to diagnose and is often dismissed as no more than bad menstrual cramps; many doctors (especially those who don’t get a period) might not know how to ask the right questions to evaluate and empathize with this sort of pain.

In order to solve this issue, we need you to join us. We aren’t asking you to do anything drastic — just start a conversation. Be open to participating in ‘girl talk’ and don’t act weird when you see someone pull a tampon out of their backpack. Listen to the people around you when they talk about things that make their period difficult for them. Speak up when your friends make a rude comment about periods or PMS — dismissing it, or using it to describe any person being too moody, frustrated, or emotional. It is all about changing your reaction, then start moving towards taking action. Maybe that means keeping a pad or tampon on hand in case you run into someone who needs it, or writing to your local government about the importance of access to menstrual hygiene. How you get involved is up to you, the important thing is that you do it.

This fight is about gender equality and empowering all people to discover and reach their full potential, regardless of a natural need.

Throughout history and into 2019, menstruation is used as a reason why women cannot hold positions of power — as if PMS and cycling hormones might hinder their abilities in politics or on the front lines in combat. There were even insults thrown around in the 2016 presidential election saying that Hillary Clinton couldn’t be president because a quarter of the time she’d be on her period. About 20% of government positions in the U.S. are held by women; if 80% of men continue to be afraid to talk about periods and fail to address menstrual hygiene as a natural need, we will be stuck at this roadblock in our fight for gender equality and a more equitable world.

Anyone who doesn’t experience menstruation should care about periods because they either know someone or love someone who menstruates — a mom, a sister, a girlfriend? But this issue is so much bigger than your relation to someone who menstruates. Menstruation is a natural, powerful, biological phenomenon. This fight is about gender equality and empowering all people to discover and reach their full potential, regardless of a natural need. I promise you, period poverty affects you, too. It affects all of us, whether you bleed or not. So, let’s talk periods.

More like this
The UK Abortion Laws In 2022, Explained
By Sophie McEvoy
How Getting An Abortion Has Changed From The ’60s Through Today
By Amanda Chatel
Why You're Seeing Green Bandanas At Abortion Rights Protests
By Lexi Inks
Every Single Big & Small Way You Can Fight For Abortion Rights
By Tess Garcia
Get Even More From Bustle — Sign Up For The Newsletter