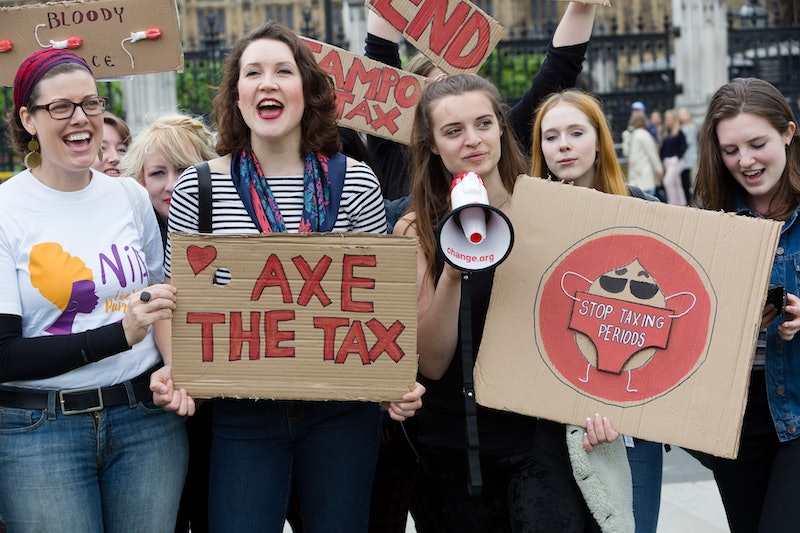 Vickie Flores/Shutterstock
By Mehreen Kasana
May 9, 2019

On Tuesday, according to The Hill, Democratic Gov. Gavin Newsom proposed a plan to eliminate sales tax on diaper and tampon purchases in California. As The Sacramento Bee pointed out, women lawmakers in California have already been calling for the removal of such sales tax for years. Now, the budget for the upcoming fiscal year might make them a reality.

"There’s a deep agenda here and I hope you’re hearing it," Newsom stated on Tuesday, according to The Los Angeles Times. "An agenda on affordability, an agenda on the cost crisis and an agenda to support parents." In addition to diapers, Newsom's budget would also remove sales tax on tampons, sanitary pads, and menstruation sponges, according to the outlet.

State lawmakers have praised Newsom's proposal, including California Democratic Assemblywoman Lorena Gonzalez. "This is something that will affect every single parent in California," Gonzalez said, according to The Los Angeles Times. "That’s substantive and that’s meaningful." According to Gonzalez, sales tax on diapers took a financial toll on struggling families.

Diaper purchases can come up to $120 in sales taxes annually, Gonzalez said, per The Los Angeles Times. She added that some low-income families even had to forgo changing their children's diapers as often simply because it was the more affordable thing to do.

Some analysts worry that the repeal of sales tax on these items could result in substantial loss of revenue. The Los Angeles Times reported that a California Assembly analysis noted sales tax removals on diapers and tampons could lead to a loss of $35 million and $9 million in sales tax revenue, respectively. But Newsom has argued the trade-off is well worth it, the outlet noted. "We can afford to do that and it’s the right thing to do," the governor said on Tuesday.

Additionally, Newsom's plan for the state's new fiscal year, which starts on July 1, proposes a new income tax credit for low-income families with kids younger than 6 years old, according to The Sacramento Bee. Initially, Newsom proposed a tax credit of $500 for such families, which he is now doubling to $1,000 under his revised budget.

The governor's wife, Jennifer Siebel Newsom, praised her husband's efforts in tackling sale taxes on diapers and period products, according to The Los Angeles Times. "Nothing is more important than our children’s futures," California's first partner said. The governor stated that his wife was key in encouraging him to push for this particular budgetary idea. "This wasn’t negotiable," he laughed, according to The Sacramento Bee.

"We are fighting for a future where our daughters will be valued equally to our sons, a California where every single child, no matter the ZIP Code or the family that they’re born into will have the best possible start in life," Siebel Newsom stated. "And a California where every parent will have the support they need to build the best possible future for their children."

In addition to California, states like Nevada have also made efforts to remove sales tax on feminine hygiene products. In November 2018, Nevada repealed the so-called "pink tax" — a conventional term for charging women for commodities geared toward them — in an attempt to make the product more affordable to low-income women.

As more states work toward making such necessary products more accessible, low-income families and women throughout America might get some much-needed relief.