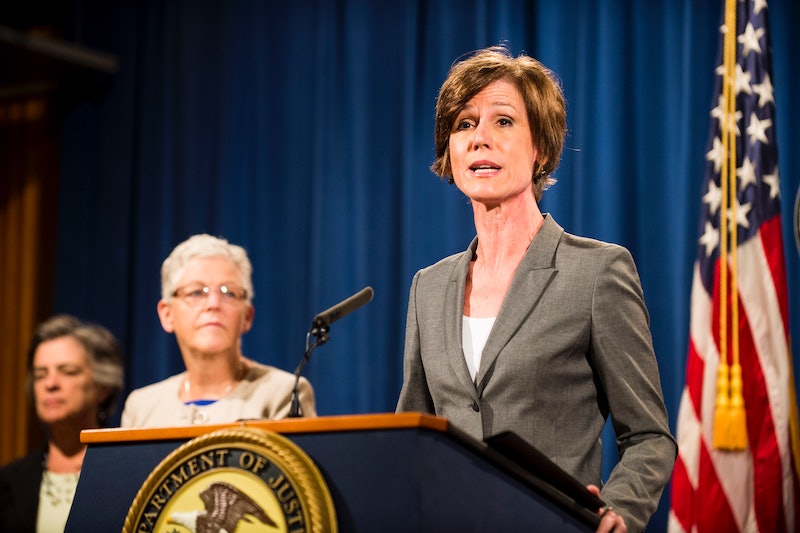 "POTUS embraces Putin yet again telling world he believes former KGB agent’s denial of attack on our election over our own Intel public servants, calling them ‘political hacks.’ Disturbing and shamelessly unpatriotic, on Veterans Day no less,” Yates tweeted on Saturday.

Trump told reporters on Saturday that he was done talking about Russian interference in the election and wouldn't “argue” with Putin about whether or not Moscow was involved in hacking into the Republican National Committee's computer systems last year. The world leaders also met in Vietnam during the Asia-Pacific Economic Corporation Summit.

After Trump's told reporters he believed Putin's denials were true, CIA director Mike Pompeo reaffirmed the CIA's stance in a statement, saying that he "stands by" the intelligence agency's declassified report concluding that Russia ran an influence campaign in order to help Trump win the presidency last year.

"The director stands by and has always stood by the January 2017 intelligence community assessment entitled: 'Assessing Russian Activities and Intentions in Recent U.S. Elections,'" a spokesperson for the CIA told The Hill. "The intelligence assessment with regard to Russian election meddling has not changed."

Last December, both the CIA and the FBI determined that the Russians hacked the Republican National Committee and the Democratic National Committee's computer systems in order to sway the election in Trump's favor. Russian hackers also leaked 30,000 emails from Hillary Clinton's private email server to hurt her chances at a victory.

An investigation, led by special counsel Robert Mueller, is ongoing and looking into Trump's campaign team to determine if they colluded with the Russians during the election. So far, Trump's former campaign chairman Paul Manafort and former business associate Rick Gates have been indicted for money laundering, conspiracy against the U.S., and other charges. George Papadopoulos, another former Trump adviser, pleaded guilty in October to lying to the FBI about trying to get "dirt" on Clinton from the Russians last year. Unsealed court documents containing Papadopoulos' emails also revealed that he had been trying to broker a relationship between Trump and Putin.

Yates wasn't the only politician to speak out after Trump said he accepted Putin's denials. Rep. Adam Schiff, a Democrat on the House Intelligence Committee, also blasted Trump in a statement on Saturday.

“The president fools no one. He understands that the Russians intervened through the hacking and dumping of his opponent’s emails, the fruits of which he exploited time and again on the campaign trail," Schiff said in a statement. "He understands that they mounted an unprecedented effort on social media to help him, hurt [Hillary] Clinton and divide and damage the country he is now supposed to serve."

In May, Yates testified to the Senate Judiciary committee about former National Security Adviser Mike Flynn, who is being investigated by Mueller's team. Flynn was fired in February for misleading Vice President Mike Pence about his contacts with Russian officials. Yates said that Flynn could be "blackmailed by the Russians."

Back in January, Trump fired Yates from her post as acting attorney general after she refused to have the Justice Department defend Trumps executive order barring people from entering the U.S. from seven majority-Muslim countries.

"The acting Attorney General, Sally Yates, has betrayed the Department of Justice by refusing to enforce a legal order designed to protect the citizens of the United States," a White House statement read. "Ms. Yates is an Obama Administration appointee who is weak on borders and very weak on illegal immigration."