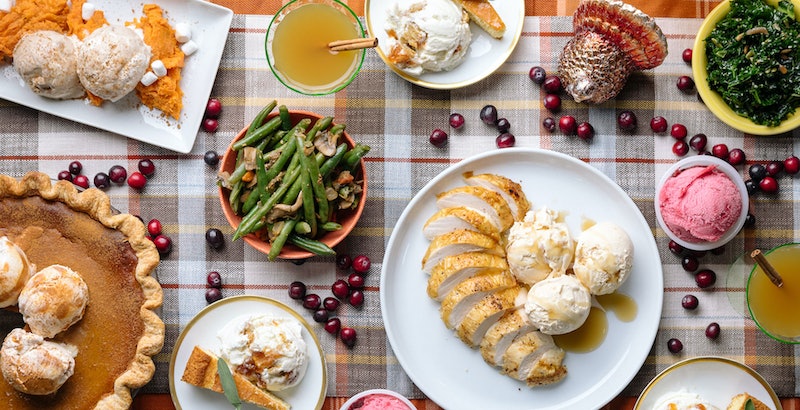 If you've ever sat down to feast on your Thanksgiving meal and then thought to yourself, "Wow, this turkey and gravy I'm eating is delicious, but it would be even better as ice cream," then you're in luck. One brand is making that happen and giving us the holiday ice cream flavors we never knew we needed in our life - except now, of course, we do, because we're way too curious to just ignore these. The popular Oregon-based ice cream shop Salt & Straw just released their limited-edition holiday flavors, and it's like eating Thanksgiving dinner in ice cream form.

Before you get totally grossed out at the idea of turkey flavored ice cream, hear us out: Salt & Straw has been releasing these flavors for a few years now, and they are always a huge hit with fans. Is it because they are so unique and different that people just want to say they tried them? Or is it because they actually are incredibly delicious? It's hard to say, but honestly, they don't sound that bad. In fact, they actually sound pretty incredible. The line-up literally serves a whole five-course Thanksgiving dinner, and they're full of interesting flavors that are mostly a mix of sweet and savory, which always rules.

Keep in mind, though: you can only purchase these as a complete package of five, meaning you'll get all of them instead of just picking one or two that you like. The package is appropriately titled "A Thanksgiving Celebration," and costs $65. And, according to Cosmopolitan, for every pint purchased, Salt & Straw will donate another pint to a local food bank near their Portland, OR; Seattle, WA; and Northern and Southern California shops. So you're getting ice cream and helping to do good at the same time.

Below is a rundown of each flavor and what to expect from them. Just a warning: this is going to make you really hungry, and really excited for Thanksgiving.