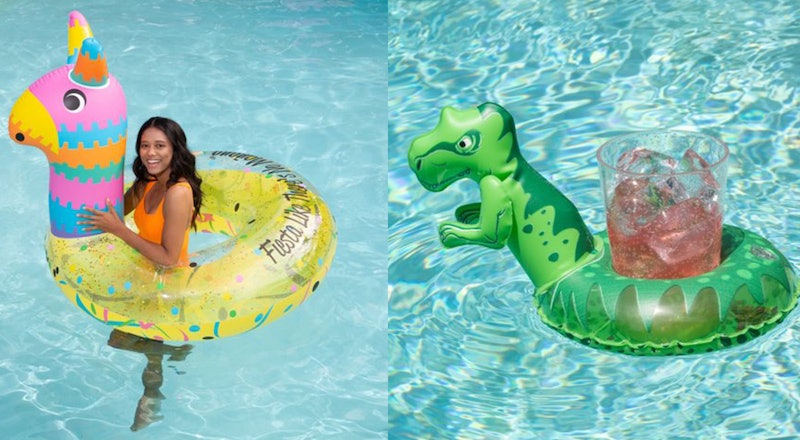 In case you were looking for another reason to crave summer weather, Sam’s Club has a bunch of new pool floats that are nothing short of a beach party dream come true. Sam’s Club, that cruel temptress, is dropping these new floaties in mid-February to get us excited for the warmer weather and as a bleak reminder of the current, extremely dreary weather. Just a few more months of ice and cold and snow and gray before you and your new float friend can sunbathe in the water.

Last year, Sam’s Club sold a pink flamingo Party Bird Island floatie, which gained something of a cult following. This year, they’re expanding their offering to include two new giant floats, in addition to the popular pink flamingo float: “a beautiful swan” and a “spectacular speed boat.” If you aren’t familiar, these giant floaties are essentially a big, big boi of a water float that can sit up to six people. These floaties stand up to 9 feet tall and 16 feet wide and come complete with an inflatable bench, eight cup holders, and even a beverage cooler to store multiple drinks. Also, the flamingo and swan are also filled with glitter. Oh wow, would you look at that: my swimsuit just magically appeared on my body.

For $169.98, you could spend your summer at sea in a giant, glitter-filled floatie bird with five of your closest friends and a bunch of your favorite drinks.

If you’re looking for a solo pool float, you’ve got options. Ten new options to be exact. There’s a llama float, a shark, float, two different kinds of unicorns...basically, there is something to fulfill everyone’s pool float dreams. They’re available for $11.98 on Sam’s Club’s website.

Also, they each come with a matching, floating drink holder. Heaven is real, and it is me sitting in that T-Rex floatie with a spiked seltzer resting safely in a matching drink-sized float. I almost just shed an actual human tear thinking about it.

Let’s take a dive (pun fully intended) into each of these ten new floats, shall we? First, feast your eyes on the two different unicorn floats.

There is a white unicorn with a rainbow mane and a purple unicorn decorated with white hearts. Say what you will about capitalism (and I will likely agree) but it has given us TWO UNICORN FLOAT OPTIONS. I will lament the current gig economy from the comfort of my unicorn pool float like the walking, talking, floating contradiction I am!

Next, we’ve got both a white AND black swan.

Did you want to spend your summer recreating the 2010 movie, playing both Natalie Portman and Mila Kunis’ parts? Now you can and you can do it in a literal lake. Also, you can make your beer recreate the final dance scene in the tiny drink floats.

To finish out our bird-shaped floats, we’ve got both the classic pink flamingo and an “American Eagle.”

To be fair, the pink flamingo could also be patriotic. Maybe she just prefers not to flaunt it in a performative way.

There are is also a llama float and a piñata float.

I'm sorry, DID YOU THINK SAM’S CLUB CAME TO PLAY? Of course they didn't. They’re fully here for all things twee and rainbow and cute and so are you.

Finally, if you’re looking for a pool float for you and your drink that says, “Don’t talk to me or my son ever again,” may I suggest the t-rex or shark floats?