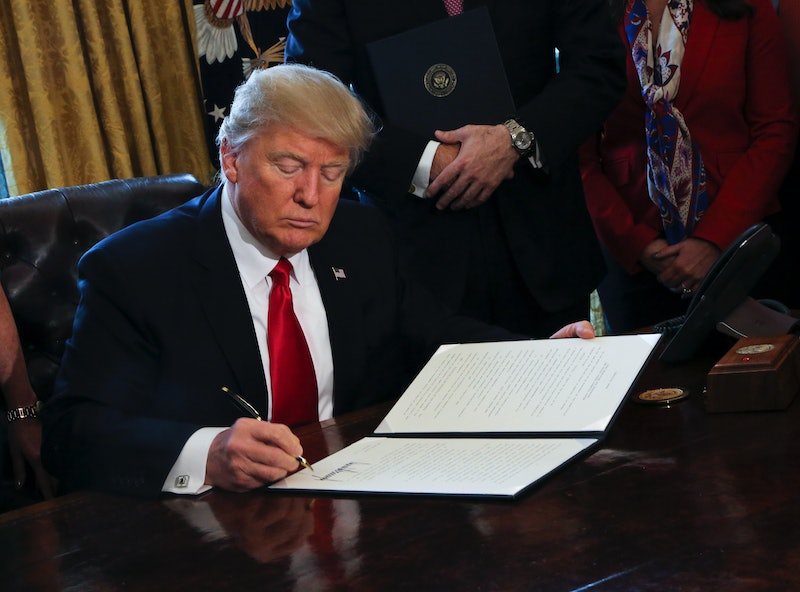 Last week, President Donald Trump signed a controversial executive order on immigration. With the stroke of a pen, Trump temporarily suspended all refugee admissions into the United States and placed a 90-day ban on citizens of seven predominantly Muslim countries, barring even those who held valid green cards or visas from entering the country. While Trump's executive order spurred a lot of outrage, protest, and op-eds, it also inspired keen non-verbal criticism like Cynthia Sousa and Sam Machado's "I Got This" political cartoon.

Political cartoons can be funny. Humor is, after all, kind of their whole reason for existing. But sometimes, apart from offering comedic analysis, political cartoons can summarize a complicated situation better than words ever could. Sousa and Machado's "I Got This" cartoon, which was originally published on Cartoon Movement, is a perfect example.

Using just three simple words and the power of illustration, "I Got This" provides spot-on representation of what the fight against President Trump's executive order on immigration looks like. Sousa and Machado's political cartoon depicts a blindfolded Lady Justice holding President Trump – in mid tantrum – at arm's length in front of a less-than-pleased looking Lady Liberty. "I got this," Lady Justice is seen saying over her shoulder to Lady Liberty.

A week later, federal U.S. District Judge James Robart delivered a major blow to Trump's executive order when he issued a temporary restraining order, resulting in a nationwide lift of the ban. A federal appeals court then rejected a request from Trump's administration to reinstate the order, further questioning the future of Trump's order.

But these two cases are just the tip of the iceberg. In one week, more than 50 lawsuits challenging Trump's immigration order were reportedly filed by residents, visitors, religious groups, and state attorney generals, according to political blog the Hill.

If you've been following the fallout of Trump's executive order on immigration at all (or really, any of the news about his first few weeks in office), then Sousa and Machado's cartoon will make perfect sense.