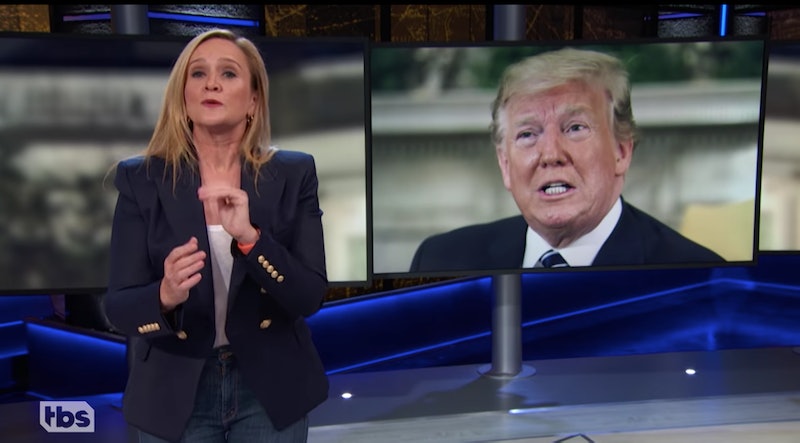 On Wednesday's episode of Full Frontal, host Samantha Bee said E. Jean Carroll's sexual assault accusation against Donald Trump hasn't received enough attention. Bee suggested that the media was sorely lacking in its coverage, considering the seriousness of the allegation against such a high profile figure — and she implored journalists to "do their job."

Carroll, a renowned writer and advice columnist, first revealed that Trump allegedly assaulted her in an excerpt of her forthcoming book published in the New Yorker on June 21. As Bee described on her show, Carroll's accusation constitutes the 22nd time the president has been accused of sexual misconduct. Trump has staunchly denied Carroll's allegation against him, saying in an interview with The Hill, "Number one, she’s not my type. Number two, it never happened. It never happened, OK?”

Despite the disconcerting nature of a rape allegation against a sitting president, Bee said that many media outlets simply failed to adequately publicize the story. "If you missed this story, that’s not surprising," she told the audience. "It didn’t make the front page of the Saturday New York Times, Wall Street Journal, L.A. Times, or Chicago Tribune.”

Bee then wryly joked, "But don't worry, the Wall Street Journal did have the space for the headline, 'NASA Worries Its Moon Rocks Might Moonwalk Away.'"

Bee noted that the New York Times even actually acknowledged that it hadn't sufficiently covered Carroll's allegation. On June 24, Lara Takenaga of the New York Times wrote that, after considering critics' comments about the paper's coverage, its executive editor indicated that the allegations "should have been presented more prominently, with a headline on The Times’ home page."

Later in the segment, the Full Frontal host commented that "days later, the accusations are being discussed, but it’s still being treated as a small story." Bee added, "It’s not getting the wall-to-wall coverage that, say, Fire and Fury [a book detailing the inner-workings of the Trump campaign and early administration] did, which is ridiculous, because Trump’s response alone should be headline news for days.”

The late-night host then lambasted Trump for how he responded to Carroll's accusation. "He denied the allegations by saying, 'she's not my type.'" Bee said. "Don’t say you have a rape type! You aren’t her type either, which is the whole f*cking problem.”

Bee wrapped up her segment by pointedly emphasizing why she thinks the media is failing in its Trump coverage. "I’m sorry that the media is tired of talking about how the president did sexual assault a bunch, but imagine how tired women are of having a sexual assaulter for president," the host stressed. "Of course, it's impossible to hear accusation after accusation without getting accustomed to it." But, as Bee described, no journalist should ever interview Trump "without asking about these 22 women."

"It matters, it will never stop mattering," Bee asserted. She ended the segment with a final, unequivocal suggestion for the media. "If you're not going to hold Trump accountable, you are not a journalist. Go do Sunday morning segments about f*cking lasagna, otherwise do your job, please."