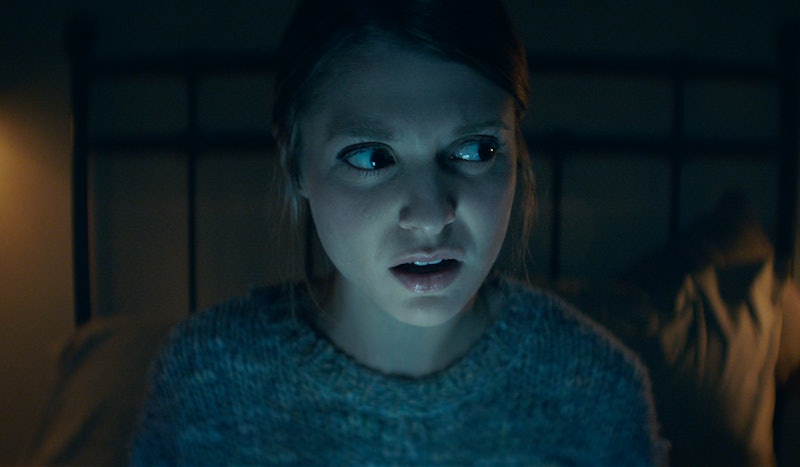 When Samantha Jayne started jotting down her deepest fears and everyday anxieties on a Google Doc, she could not conceive of that fact that one day they would inspire a show. What started as a collection of short poems paired with cartoons she posted on Instagram (based on the aforementioned Google Doc) has taken on a new life in the form in Quarter Life Poetry, a 9-episode series on FXX Cake.

Each short-form episode delves into a different anxiety, from plummeting into panic at a party to the difficulty of establishing a work life balance. “I grew up with a lot of shame and my negative self-talk was always very strong,” says Jayne. “It took years to be able to talk about my anxieties with friends...and I realized that they are more prevalent than I thought,” Jayne tells Bustle over the phone from Idyllwild. The show is absurd and fantastical at times while remaining squarely focused on the inner workings of an introvert’s mind and all the inconvenient ways anxiety manifests.

The first episode, entitled "Damn I Love this Friday Night" follows a woman through an evening many viewers might recognize. After reluctantly agreeing to go out then being abandoned by friends at a party, we watch our protagonist spin out in an intense episode of social anxiety. The second episode, simply called "Savasana" delves into excruciating silence at the end of the yoga class where we are all encouraged to clear our minds. The show takes on everyday moments that are rather unremarkable and transforms them into something else.

Jayne’s Instagram account of the same name has garnered a following in the hundreds of thousands. But before Quarter Life Poetry was a social media phenomenon, a book or an FXX series, it began as a way to cope with the existential dread Jayne was feeling in her mid-20s. She was working as an art director at an advertising agency and feeling stuck when she started to write and illustrate these funny little poems as a way to bring creativity back into her life. “It would always start with writing down a little truth that occurred to me,” says Jayne. “Sometimes when it was slow at work or when I got home I would take those little lines of truth and I would rhyme them and it was through the rhyming I’d try to find some humor in them because rhyming innately brings out this humor and lightness.”

Growing up in New Jersey, Jayne was enamored with the works of Shel Silverstein and Dr. Seuss whose influences you can spot in her work. The rhyming quatrains paired with colorful cartoons covered everything from money issues to relationship stressors. They are quippy and clever but come from a place of genuine struggle, one that almost anyone in their mid-20s and 30s can relate to.

A quarter life crisis is essentially a period of intense anxiety surrounding the direction of your life. “I was feeling really stuck. I could pay rent and fend for myself, but I was feeling this emptiness like I wasn’t doing what I should be doing,” says Jayne. These years can be isolating and Jayne’s cartoons resonated with so many women going through something similar. “The most important thing specifically was to make something so that other young women feel like they are not alone,” says Jayne.

The goal was the same for the series, which allowed for more experimentation in an entirely different medium. The entire series was shot in just 10 days, with Jayne’s husband and creative partner Arturo Perez Jr. serving as director. “Arturo adds this cinematic weight to it and thoughtfulness that I think is really necessary for the subject matter in order to validate these experiences for the audience and have them be like 'wow these are little things I have been feeling but these people took the care and took the time to elevate this concept and honor it,'” says Jayne.

The series is personal for Jayne, who has struggled with many of these anxieties herself. The show takes these everyday struggles seriously while mixing in elements of music videos, spoken word poetry and hilarious inner monologues. It is a meditation on millennial angst and one worth watching.