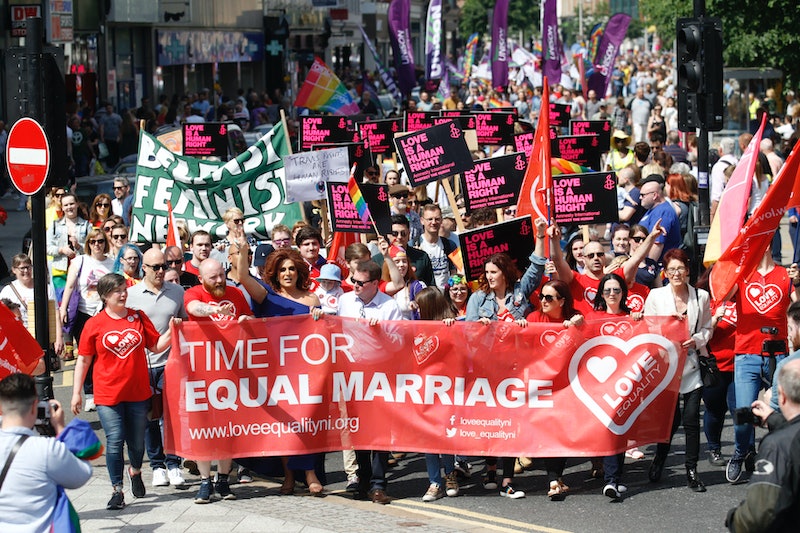 After years of protests and campaigning, same-sex marriage is officially legal in Northern Ireland. As of Jan. 13, same-sex couples living in the region can register to marry. As the law states people must register 28 days before marrying, the first weddings are expected to take place in Valentine's week, per the BBC. A rather fitting time for such a momentous occasion.

Same-sex couples who are already married will also now be legally recognised as married in Northern Ireland. But people in civil partnerships cannot convert to marriage just yet, reports the BBC. The Northern Ireland Office is scheduled to begin a consultation later in 2019. As the Guardian reports, legal action over this delay is being planned.

John O'Doherty, a member of the Love Equality campaign, told the BBC today marks the "culmination of five years of campaigning for marriage equality and marks an enormous step forward for LGBT+ people."

But, he added, "there remain a number of issues to be addressed before couples in Northern Ireland have the same rights as those in other jurisdictions. However, we celebrate this remarkable achievement with the thousands of people who made their voices heard and demanded change in spite of the many barriers placed in their way."

Northern Ireland has been waiting for this move toward equality since 2014, when same-sex marriage was legalised in England, Scotland, and Wales. The law proclaimed it a devolved matter, per the Independent, meaning it was left in the hands of Northern Ireland's Parliament, Stormont. Although a November 2015 vote on same-sex marriage saw a majority in favour, the Democratic Unionist Party (DUP) blocked the law change, reports the BBC.

A disagreement between the two main political parties — the DUP and Sinn Féin — led to the collapse of Stormont in January 2017, a collapse that was only recently resolved, per the Guardian. Left for years with no clear leadership, people in Northern Ireland began pushing politicians at Westminster to introduce equal rights legislation.

In the summer of 2019, Labour MP Conor McGinn proposed an amendment to the existing Northern Ireland Act, stating that the government would legislate for same-sex marriage in Northern Ireland if Stormont failed to get back up and running by Oct. 21. It was supported by MPs in Westminster along with a separate amendment on the issue of abortion. Stormont failed to restore itself by the deadline, so the law change was made.

"Everyone who values equality, love, and respect can celebrate today," McGinn remarked to BBC News NI. "It's a good day for Northern Ireland, an important day for citizens' rights across these islands, and an exciting day for same-sex couples who can now register to marry."

More like this
Gen Z Are Twice As Likely To Identify As Queer, According To New Data
By Sam Ramsden
Pret & Costa’s Coffee Is The Strongest On The High Street, According To Which?
By Sam Ramsden
This Is When Netflix Is Going To Start Charging You For Sharing Passwords
By Darshita Goyal
Twitter Has *A Lot* To Say About The "Single Penalty”
By Sam Ramsden
Get The Very Best Of Bustle/UK
Sign up for Bustle UK's twice-weekly newsletter, featuring the latest must-watch TV, moving personal stories, and expert advice on the hottest viral buys.