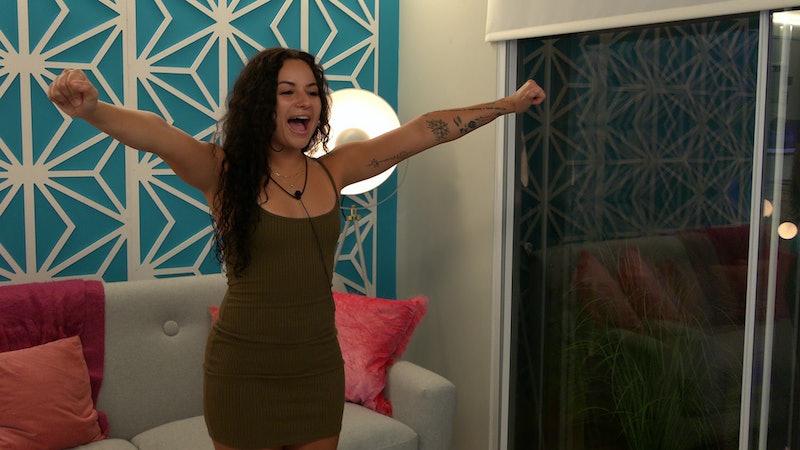 One of the most shocking twists on Netflix's new reality show, The Circle, was that "Rebecca" made it to the finals without anyone catching on to her real identity. But it turns out that quite a few people were suspicious of her from the start. In a recent interview with People, The Circle's Sammie Cimarelli said she knew Rebecca was a catfish all along. Though, she'll admit, she definitely didn't know Seaburn Williams was on the other side.

"I wasn’t expecting that it was going to be a guy, that didn’t cross my mind. But I wasn’t expecting Rebecca to be Rebecca," Sammie explained. Seaburn — who used pictures of his real-life girlfriend to portray the shy and sweet Rebecca — made a lot of friends and allies during his time on The Circle, and even made a potential romantic connection with another competitor. While a few other catfishes were unmasked over the course of the competition, Seaburn managed to make it to the final before anyone seemed to figure out that Rebecca wasn't who she said she was.

However, Sammie would like the record to show that she "had little inklings about everyone," which meant that she wasn't too shocked when Seaburn introduced himself at the final instead of Rebecca. "I didn’t really know if anyone was real at that point," she told People, adding that "when I saw that Rebecca was Seaburn, I was like, 'Oh, Jesus. We kinda knew.'"

While Sammie was expecting that Rebecca wasn't really who she said she was, other Circle competitors were totally shocked to discover that Seaburn's identity. "It was definitely a humbling experience," Shubham Goel, who considered Rebecca one of his closest allies, told Time after the show ended. "I was so wrong about so much."

Though he described seeing Seaburn for the first time as "an out-of-body experience," Shubham ultimately admitted that it "didn't matter" to him that "Rebecca" was a catfish, because the bond they formed was genuine. "The thing with me and Seaburn though, it was a brother-sister thing. We had this connection, with her sword-fighting and my Marvel and our science," he explained. "Everything was the same [at the end] except instead of brother-sister, it was brother-brother."

The affection between them is clearly mutual, as Seaburn recently praised Shubham as "one of the most humble and genuine people I have ever met," in a post on Instagram. He continued, "I’m glad me and him bonded the way we did love him to death."

His photos on The Circle may not have shown his real self, but according to Seaburn's girlfriend, Sami — a.k.a. the girl in the photos — everything else viewers saw from him was completely genuine. "People don't know, that's him 24/7," she said in a Facebook interview about Williams' behavior on the show. No wonder he's been able to maintain such a strong bond with his costars since the show finished filming. After all, Rebecca may not have been real on The Circle, but the friendships she made definitely were.