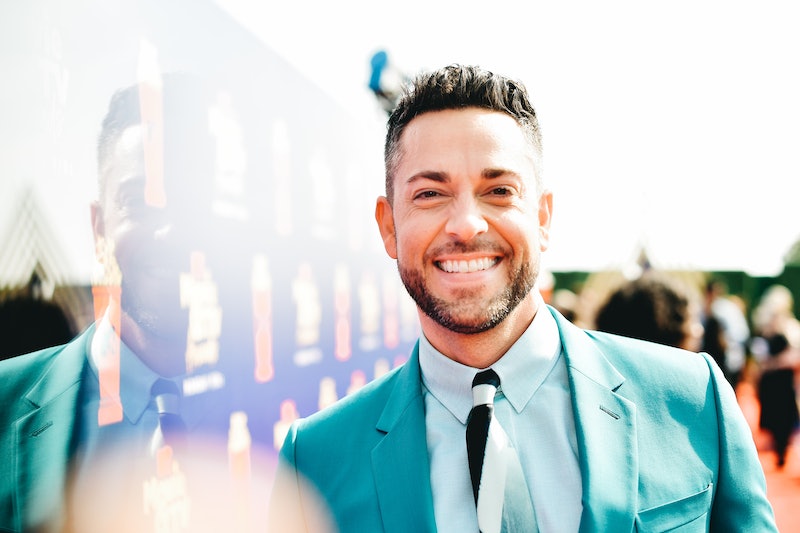 Zachary Levi has really been on the up and up lately. While many fans became familiar with the actor as the computer whiz-turned-super spy in Chuck, the con artist Jeremiah in Alias Grace, or Midge's hunky new beau in The Marvelous Mrs. Maisel, most probably know him as the titular hero in DC Comic's Shazam! movie. His charismatic role in Shazam! is likely why he was tapped to host the MTV Movie and TV Awards, airing Monday, June 17. Bedecked in a handsome teal suit and sporting those signature superhero muscles, fans may find themselves wondering (it's OK, just admit it) if Zachary Levi is dating anyone. Levi is pretty private about his love life, but it does appear he's currently single.

Levi usually keeps his personal life on the DL, but it sounds like he was in a longstanding relationship for most of his early career. Back in the early 2000s, Levi dated actor Missy Peregrym, who starred in shows such as Heroes, Reaper, and Rookie Blue. At some point it was believed they broke up, so fans were pretty shocked when both Peregrym and Levi revealed on Twitter in 2014 that they had tied the knot, posting a picture in matching Mr. and Mrs. hoodies with the hashtag #marriedinMaui.

It was a surprise wedding, and a very intimate one at that. "I'm probably too public with my life and need to kind of rein that back in a little bit," Levi joked to E! News back in 2014. "It was nice to just kind of have our own little personal, very small wedding."

The romance wasn't to last though, and just 10 months after they secretly tied the knot in Hawaii, Peregrym filed for divorce. Per documents filed April 2015 in the Los Angeles Superior Court, Peregrym cited irreconcilable differences as the reason for the breakup. Fans can only speculate what those differences were, but Levi hinted at difficulties at a charity event just a month before the documents were filed, telling reporters that "marriage is a whole other animal".

Whatever the reason, it appears to have been an amicable break, but the divorce marked the end of a pretty long courtship for Levi. Since then fans have wondered if perhaps Levi has been quietly dating his old Chuck costar Yvonne Strahovski (now starring in The Handmaid's Tale), with some seeing their Instagram hang-outs as a sign they were pursuing an offscreen romance. That's not the case though, as Strahovski married her long time boyfriend Tim Loden in 2017 and they have a kid together.

It's unclear if Levi dated anyone between 2015 and now, but looking at the way his private wedding with Peregrym became very public, it's understandable that he's become more secretive about his love life. And with his increasingly busy schedule (and intense workout regiment for Shazam!, which already has a sequel in the works), his focus right now is just on himself and his career.

In an April 2019 interview with Access Live, Levi was asked if he was back on the dating scene, and his answer was very introspective and thoughtful:

"You know honestly I've been in this really kind very good, healthy moment of just, I don't know, being with me, loving myself, working on myself. Getting stronger and healthier and waiting for that right woman to enter my life. I don't know where she is, but I'm trusting that that's all going to time out the way it's supposed to."

Levi revealed he has been on at least one dating app, but like most of us, is pretty ambivalent about it. "It's...I don't know, I mean we live in a very different world now. I don't know how much we should be embracing or how much we should be resisting as far as where technology blends into our lives ... But there is something, I think, quite democratic about being on the right app for you."

He went on to expound on the importance of mental health, and how he's struggled with that in the past. "Mental health is the most important thing we could all be talking about right now. I'm a huge proponent of therapy, and I've saved my own life through that, with the help and love of my friends and family ... If we can know ourselves and love ourselves as deeply as possible, then we can know and love others so much more deeply."

Levi might still be single, but he's clearly finding a happy equilibrium between work, physical fitness, mental health, and self care, which is the best thing fans could ask for.